In one, multi-layered figure, Wojciech Ziemowit Zych conjures up clashing opposites, launching a synthesis of seemingly incoherent details, “a reflection of the complexity of the modern world”, explains the composer.

Diverse types of movements and tempos, dance-like qualities skewed with a grimace and counterpointed with grotesque, a mad perpetuum mobile, and then suddenly: placidity and meditation. Zych’s music combines old conventions with modernity, a seemingly perfect example of 21st century postmodernism. And yet there are no collages to be found; reappropriation, pastiche, and plays on popular culture are also completely foreign to his art. Instead of breaking yet another taboo, it aims for grand syntheses and narration; instead of new media, it employs traditional instruments; instead of experiments with new techniques, it applies old ones in new contexts. What about fashionable composition techniques such as spectralism and microtones? Yes, but only in homeopathic doses. 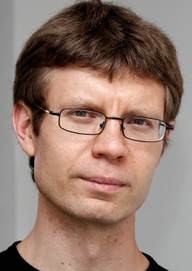 Wojciech Ziemowit Zych,
archive of EUCEMUSICWojciech Ziemowit Zych, born 1976 in Warsaw, grew up in Białystok and studied in Kraków, Rotterdam, and Darmstadt. Asked about his masters, the spiritually and intellectually independent composer lists names from the Central and Eastern European canon: György Kurtág, György Ligeti, Alfred Schnittke, and Tadeusz Wielicki. He is an outsider from Kraków, one who remains entirely detached from the world of modern trends and fashions. While not a conservative, he does appreciate the idea of the traditional work of art and the seriousness that is so despised in our times.

In his Concerto for Bass Clarinet and Orchestra the solo instrument, traditionally placed at the front of the stage, is in essence a voice from afar; it is a discreet whisper in the leading discourse of the orchestra. And yet it is the rustling and murmuring bass clarinet motifs that leave the most indelible mark on the memory. They are likes motifs of fate, mementos, leitmotifs.

Wojciech Ziemowit Zych (born 1976) studied at the Academy of Music in Kraków under Prof. Marek Stachowski, and under Prof. Peter-Jan Wagemans at the Rotterdam Conservatory. The piece Friends of Kaspar Hauser, commissioned by Deutschlandfunk and the Warsaw Autumn International Contemporary Music Festival, represented Polish Radio at the listening sessions of the 2005 UNESCO International Rostrum of Composers in Vienna. His pieces have been performed at many prestigious festivals in Poland and abroad. He primarily writes instrumental music. Major works: Symphony No. 1 (2001–2002), Concerto for Bass Clarinet and Orchestra (2003), Hommage à Tadeusz Kantor for orchestra (2003), Friends of Kaspar Hauser for chamber orchestra (2004), Symphony No. 2 (2004–2005), Constantly Present Longing for bass clarinet, percussion, piano, and violin (2005), Hommage à György Kurtág for violin and bass clarinet (2005–2006), Rozedrganie for two pianos (2005), Stirrings of the Will for orchestra (2005–2006), Poetyka niedo-…/Niedo…-poetyka for harpsichord solo (2007), Retoryka niedo-…/ Niedo-…retoryka for string quartet (2007), Act of Getting Old in the Form of a Rondo and Letter Unfinished…, Letter Found… for percussion duo (2008).

In his piano piece Rozedrganie, two pianists obsessively revolve around a handful of sounds: a narrow range, a few notes, ostinatos. These sounds have also been composed to ensure a lasting place in our memories. A series of six miniatures for the flute, saxophone, bass clarinet, harpsichord, and a string quartet, titled Friends of Kaspar Hauser, feature recurring figures, juxtaposed timbres, and harmonies. This is music with meaning; it’s not just about the experience of the moment, but the message. It’s about “speaking through sounds, not playing with them aimlessly” (Zych).

Zych’s musical language has a complicated grammar and requires concentration. Clichés and unambiguity are not enough to comprehend it. The same is true of the titles and the extra-musical references contained therein. The best example is Kaspar Hauser (1812–1833), a person who managed to elude science, logic, and all rationality. He was a mystery and he carried a mystery within. Although he provoked the interest of onlookers and aristocrats, no one was able to fathom his nature, emotions, and fate.

Wojciech Ziemowit Zych revels in ambiguities. The neurotic drive to impose order and to pigeonhole has no power over him. His music always deals with memory, in the broadest sense: memory as a memento, as nostalgia, and as an openness to what lies in the future. For him, the future begins in the past and in the arduous and profound experience of the present.

He studied in Western Europe, but finds the multicultural cities of the West inherently foreign. He is more attracted to Moscow than to Paris or London, and is unimpressed by the laid-back vibe and opulence of Berlin. He has taught himself the astounding skill of filtering information: he’s only interested in that which applies to the human condition. In an age of unrestricted access to all information and any number of cultural codes, audio recordings, and the ubiquity of electronic technology, he opts for classical instruments. “I have a certain distrust of machines. What happens if they cut the power?”

Zych is fascinated by the human condition in the most basic sense of the word: life and death, community and the fate of the individual, being and solitude. But instead of religious references, Zych offers purely musical images/symbols contained in an individual’s fate (Hauser in Friends of Kaspar Hauser, Tadeusz Kantor in Hommage à Tadeusz Kantor for orchestra). No words are sung, no commentary is offered – there is only the title; Hauser and Kantor as musical figures, there for pure musical contemplation. Instead of the solemn brooding of 19th century moralists such as Kierkegaard and Schopenhauer, he seeks inspiration in the writing of Jacques Derrida and Emmanuel Levinas.

Différance, an epic, two-hour-long series of pieces for two pianos and percussion, which took several years to compose and premiered at Warsaw Autumn 2010, is a dialog with Derrida. Derrida’s “différance” is refracted: it signifies the effort that is necessary to co-play, to co-harmonize, to interact. Zych achieves a characteristic fusion of lyricism and drama in both the individual gestures and at a grander scale. There is a surrealist tension about Différance: interaction, harmony, and then divergence, a Derridian “différance”. Although the composer mentions a farewell in the commentary to the piece, Différance is also a beginning. It is one of the most mysterious (unfathomed) pieces I’ve heard in recent years!

The composition Zych is currently working on for voice and chamber orchestra, featuring two pianos – the composer’s favorite instrument – in the center (written specifically with Emilia Sitarz and Bartłomiej Wąski of the Lutosławski Piano Duo in mind), includes fragments of the essay Totality and Infinity by Emmanuel Levinas. What fascinates Zych about the work of Levinas is his “poetically saturated language and his philosophy of ethics, in which there still remains a place for the affirmation of man”. It remains to be seen what the final overtones of the piece will be. The composition premiers in September at the Wratislavia Cantans Festival.

Between East and West

Witold Lutosławski once described himself as a lone wolf, while Paweł Szymański locks himself up in his solitude, and yet our culture has never truly embraced the outsider as a character. Polish composers, from Chopin to Lutosławski, have always sought inspiration in the West. Zych is an exception in this regard. “The composer is more of a spiritual stance than a career”, he says, entirely as if he was brought up in the Eastern tradition of the icon. Nevertheless, the repetition and duplication of age-old models is foreign to him: “One must constantly make the effort to step beyond the forms that have already been annexed.” He is particularly interested in the category of space, in the simplest sense (the spatial arrangement of instruments) and the acoustic sense (space as a natural phonosphere that interacts with the composed sounds). He often hammers away at a single note in search of its force and its power to affect us, employing microtones, multiphonics, sound, and sounds to let his musical language achieve a fusion of construction and expression. He is a proponent of musical idiolects, which he contrasts with schools and musical esperanto.

Eastern spirituality, Western progressiveness, and a strong longing for isolation all come together in Zych, forming a characteristic mix. Interestingly, there is not a trace in his music of the Western inferiority complex that is so devastating to Polish artists. Tall, brooding, and focused, Zych is serious and confident, even though his music poses more questions than it answers. He borrows from the achievements of 20th century Western modernism while emphasizing the need to redefine our artistic form, yet he is a pure-blooded Eastern European.

Retoryka niedo-…/ Niedo-…retoryka for string quartet, Constantly Present Longing for four instruments, Stirrings of the Will for orchestra. Microintervals and old-fashioned counterpoint broken with falling glissandos; subconsciously catchy ostinatos interrupted with sudden bright surges; clashes, silence, and sudden sonic meditations – all of this joined by an invisible thread, a logic of a higher order that steps outside the straightforward dialectic of cause and effect. In this uncanny synthesis and simultaneity, this combination of opposites, there is a tension: a contemporary ritual.

Zych does not employ ancient rhetoric, but his music is a “language” that is heavily saturated, emotional, rife with references, and finely honed, yet neither sentimental nor avant-garde; it is natural.