Amerykanka (American woman) is a modest and complete book that entices us with all of its editorial might. The readers are spared the effort of wading through all the dense imagery of the past, extracting meaning, and seeking out photographic pearls. We are given a series of modern, attractive, and fun pictures. The authors of the collection, photographer Kuba Dąbrowski and curator Kuba Śwircz, have discovered a theme that allows them to present the frivolous side of the work of pre-war documentary photographer Zofia Chomętowska, best known for her portraiture and landscape photos of her home region, Polesie. 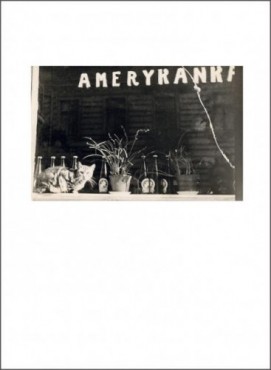 “On the road” is the common theme of the photographs. The conquest of land combined with compulsive documentation has its roots, of course, in 1920s America. The classics of the genre: Walker Evans, Robert Frank, and Stephen Shore roamed the endless country, finding members of all social classes to serve as subjects for portraits. They helped establish the myth of the photographer-traveller, exploring the boundless land, reaching remote villages, conquering the frontier and bearing witnesses to the cruel hardship of life, mixing brutalism with lyricism. As Susan Sontag writes in her essay On Photography, it is a myth about “the Whitmanesque mandate to record in its entirety the extravagant candors of actual American experience.” The American school was worlds away from the European tradition of stylised and over-aestheticised photography, staged for the needs of a narcissistic bourgeoisie.

But the authors aren’t guided by a desire to force Chomętowska into any specific interpretational context, or to compare her with her New World counterparts. The title Amerykanka merely hints at the atmosphere of the photographs; it is a reference to the myth, as if to share an in-joke with the reader. As Kuba Śwircz points out, the United States was as distant a land to Zofia Chomętowska as the Second Polish Republic is to us. The result is a parallel cognitive distance, one that no one is about to question. 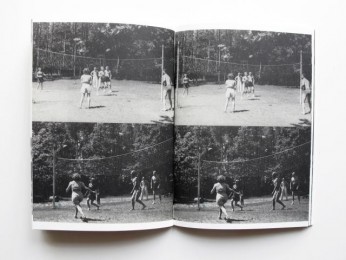 Amerykanka is also a direct quote from one of the artist’s images. The photograph depicts a window. On the narrow windowsill stand withered potted plants, a row of capped bottles, and a fluffy cat with rays of sun dancing in its fur. The cracked pane of glass in the window reads “Amerkyanka”, scrawled in a sloppy, printed hand. The script is so unskilful, or perhaps careless, that the letters barely form a cohesive word, and the paint is peeling off the lettering. What sort of place does it advertise? Is it some small-town bar? Our curiosity must remain unsatisfied. The homely image and nonchalant sign certainly touch upon every popular notion of the American spirit. There’s none of the glamor of America’s industrial cities, no Wild West pioneer heroism.

It was no coincidence that Zofia Chomętowska set out “on the road”: as a distinguished photographer, she was commissioned by the Ministry of Communication. Her work was not the fruit of a pre-beatnik rebellious streak, but a respectable job for a government institution. Her colleagues across the ocean worked on similar terms: Evans was sent out by the Farm Security Administration, while Frank received a Guggenheim grant. The contract obliged Chomętowska to produce a series of photographs showcasing the beauty of Poland’s natural landscape and culture. The series was to decorate the rolling stock of the national railway company. Her use of the small-format Leica camera earned her the respect of other progressive photojournalists. 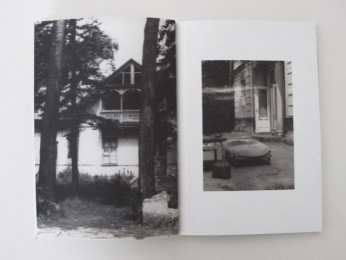 Not all the pictures selected from the six hundred prints provided by the Archeology of Photography Foundation are the result of Chomętowska’s project for the ministry. The selection presented in Amerykanka doesn’t fit into any rigid academic convention. The editing is rather liberal: the images are not captioned, and it isn’t until we reach the end of the book that we get a chance to locate the photos in place and time. “You don’t have to read this, but you should know that…” the editors explain, continuing their game with the reader and fulfilling their concept of avoiding any excess. Can we still consider the end result completely neutral?

Although Śwircz and Dąbrowski avoid the word itself in their terse editorial exposé, the images together form what could be described as a series of lifestyle photographs. The pictures reveal the customs of the pre-war Polish elite: leisure, party games, recreation, and aspirations. They encompass the entire area of homo ludens’ behaviour: trivial activities, devoid of pathos and institutional control. Nice activities, ones that offer us a pleasant image of ourselves. To paraphrase Dorothea Lange’s claim that every photograph is in a sense a self-portrait of the photographer, Amerykanka is like a collective portrait of Chomętowska, Śwircz, Dąbrowski, and ourselves, as we are drawn into the story of an affluent country where the style of one’s suit and such occupations as chatting at cafés are no less important than a patriotic uprising.

Pańczuk and Freyson resolved to do away with the irritating myth of Iceland as a land of elves. Agnieszka Rayss was in search of Iceland’s ‘natural treasures’