Uwaga, expats: the performances of Chór Kobiet have proved to be accessible for any audience, even if you don’t speak Polish. Warsaw’s homegrown Greek theatrical chorus has found a wide reception outside of Poland, touring countries from Japan to France to Ukraine this fall. The group’s second project, Magnificat, has just been awarded Best Alternative Theatre and Best Theatrical Music for the 2010-2011 season by Teatr magazine. The chorus returns to Warsaw this November and December to perform at their home base, the Zbigniew Raszewski Theatre Institute. 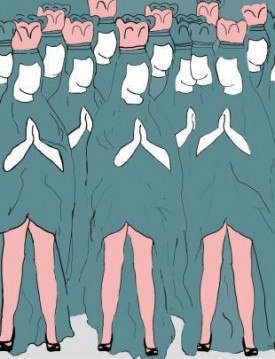 I’ve been studying Chór Kobiet’s work since this summer, when I was able to observe tour rehearsals for their first project, Tu mówi chór…: tylko 6 do 8 godzin, tylko 6 do 8 godzin... (“This is the chorus speaking: only six to eight hours, only six to eight hours...”). The ensemble has been working together for almost two years. Chór Kobiet (“chorus of women”) was cast from an open call in December 2009. 130 people showed up to audition; twenty-eight of them formed the chorus. The women have a wide range of ages and musical backgrounds. They speak, sing, chant, whisper, sigh, and shout. Górnicka chooses and arranges the collage of text. She quotes texts, many with stereotypically female associations — opera plots, cake recipes, liturgy, women’s magazines, and skews them in the funhouse mirror of her choir. (As noted in a Facebook discussion on another English-language article I wrote about the group, “chór” can be translated as “choir” or “chorus” — but “chorus” emphasizes the connection to the ancient Greek theatre.) Their first project premiered in June 2010, their second in June 2011. The group shows no signs of slowing down.

In Polish theatre, forms and elements resembling Greek choruses are not unheard of. Grotowski and Kantor both experimented with choruses; Polish companies inspired, in part, by one or the other of those directors, such as Wrocław’s Teatr Pieśń Kozła, Łódź’s Chorea, Michałowice’s Teatr Cinema, and others, follow suit. However, even in this chorus-conscious context, it is still a remarkable feat that Górnicka was able to sustain an hour-long chorus of almost thirty performers, speaking comprehensible text, as the central element of a theatrical performance. I wanted to find out more about her methods. 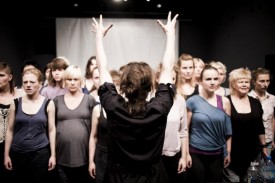 photo: Krzysiek Krzysztofiak, courtesy of
Instytut TeatralnyIn the rehearsals, I found that Chór Kobiet’s sound is achieved through painstaking attention to detail. Górnicka, who has a background in vocal music as well as theatre, conducts every performance. (Shades of Kantor conducting his actors, yes — but this conducting is more measured, more precise.) She began each 5-hour rehearsal day with a vocal and physical warmup, and then meticulously worked through the show. She was attentive to the tone of the chords, to the placement of consonants. Every note that Chór Kobiet sang was timed and tuned; even the moments of seeming spontaneity, of babbling or cacophony, had boundaries.

The chorus performs a cappella. The new pitches they need to begin again after a vocal rest are gently hummed for the group by one of the singers (Kaja Stępowska, who has absolute pitch). They tune to her, as to a first violin. Their sound is self-contained. With no set, props, recorded sound, or amplification, the only restriction on Chór Kobiet's touring is finding housing for thirty performers. 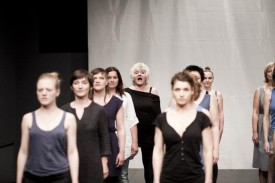 photo: Krzysiek Krzysztofiak, courtesy of
Instytut TeatralnyOutside the rehearsals, the actors and their families were close. They carpooled, they shared snacks, they sang a heartfelt Sto lat for each other’s birthdays. I began to learn names. There was Ewa Chomicka, with a punk-rock haircut and a flowered dress; there was Ewa Kossak, the singing teacher, whose centered soprano anchored the group; there were the Karolinas; the Kasias; the Annas; and Justyna Chaberek, with a megaphonic belt to make Lea Michele’s hair turn grey.

Justyna has one memorably timed solo in Tu mówi chór...: an ironic version of “Teach Me, Tiger” that comes right after a depressing section about sex workers. This sort of humorous, twisted juxtaposition prevented Tu mówi chór...’s politics from becoming too one-note. The script released tension with jokes. A sense of anger at the historic restrictions on women was present, but restrained. The emotion under Tu mówi chór…’s surface erupts in the second project, Magnificat — an exploration of the role of Mary in Catholic religious worship and in the lives of Polish women.

I saw Magnificat when it was last in Warsaw, on 27 September. I arrived at the Instytut Teatralny on a rainy fall night. The lobby and café were packed; there were nervous-looking men with flowers, groups of women, talkative families, children and grandparents. Chór Kobiet’s fans were as various as the group itself. We impatiently thronged at the closed doors of the performance space, past the scheduled start time.

photo: Krzysiek Krzysztofiak, courtesy of
Instytut TeatralnyWhen the doors opened, the audience burst through — to find the chorus already massed on stage, in silent stillness. There was something intimidating about this group of thirty women staring at us. I thought of statues, icons, figures placed on pedestals – in judgment? We scurried to our seats, and Górnicka raised her hands for the downbeat.

Magnificat is a blisteringly unrestrained piece of theatrical music. Górnicka frequently beckoned for more and more volume from her singers. If Tu mówi chór… was a fugue or a madrigal, then Magnificat is the loudest movement of a symphony, when all the instruments in the orchestra are playing at once.

To give one example of the intensification in the chorus’s second project, early on in Tu mówi chór…, the theme to “When You Wish Upon A Star” was briefly sung and then distorted into a scream. The melody, which plays under the logo at the beginning of every Disney home video, was not permitted to reach its expected resolution. Dreams of Disney Princesses, it was implied, do not come true in real life.

Magnificat performs at the Instytut Teatralny on 13, 14, and 15 November and 2, 3, and 4 December. Tickets: www.chorkobiet.ezapisy.pl

Tu mówi chór... will also perform in Berlin, at Hebbel Teatr, 22-25 November, and in the North Rhine-Westphalia region in the spring of 2012.  Magnificat will perform during the 2012 Warsaw Theatre Meetings. www.facebook.com/chorkobiet www.chorkobiet.pl

Magnificat had a matching melody-into-scream move early on. However, the interruption motif continued to recur, much more frequently than it did in Tu mówi chór... The usurping voices were inventive; they cooed, as if over a crib (birth of Christ?), oohed and aahed, or smothered a rising shriek with a loud exhalation. Interruptions were often accompanied with an aggressively fake-looking smile, as if to underline how women often have to put a good face on problematic situations. I began to expect every line to be interrupted. The constant interruptions became a commentary on the suppression of women's voices.

In one arresting interruption in Magnificat, the chorus began to sing the familiar notes of “Ave Maria”, but stopped before finishing Mary’s name. The silence reflects on the societal restrictions on conversation about certain topics, such as the roles of Polish women in the Catholic Church. The truncated “Ave Ma—” implied that women — including Mary herself — do not have sufficient opportunities to speak for themselves. (In Tu mówi chór…, the chorus cries out Mów! Mów! (“Talk! Talk!”) as a command to the audience.)

The traditional Magnificat hymn, in the liturgy, takes its text from Luke 1:46. A pregnant Mary is speaking to her cousin Elizabeth (herself pregnant, with the infant who will grow up to become John the Baptist.) These are Mary’s first words:
Greek: Μεγαλύνει ἡ ψυχή μου τὸν Κύριον.
Latin: Magnificat anima mea Dominum.
English (King James version): My soul doth magnify the Lord.

“Magnify” is exactly the right word for Chór Kobiet — every note is magnified across thirty bodies and thirty voices. The figure of Mary, in Górnicka's vision, is one of tremendous power, both spiritually within Catholicism and culturally within Poland. A chorus of Polish women reflecting on Mary is a formidable one. Their Magnificat works through extreme amplification — but their intention is to amplify the voices of Polish women.

At the end of a rehearsal this August, Górnicka was gathering up her scripts and notes and heading towards the lobby as we discussed the project. “I want to create a new kind of chorus theatre”, she said. If Tu mówi chór… was the birth of that new kind of theatre, then Magnificat is its adolescent rebellion. It has all the emotional intensity of a teenager who is simultaneously captivated by and ambivalent about the ritual of her First Communion.