I saw a few dead bodies in the mud in the river
when I went fishing
It was spring, the snow was thawing
I had never connected the two actions before
but I wouldn’t pull out a dead fish from the water
just as I didn’t pull out these people

little brother brought me mother’s hair stained with blood
with shreds of brain
and said: but hares also dig holes in the ground
then why should we be worse than hares? 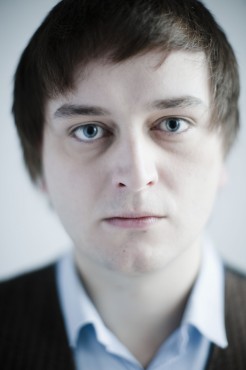 photo Michał SzlagaGrzegorz Kwiatkowski, born 1984, lives in Gdańsk, poet and musician; he has published three books of poetry: Przeprawa (2008), Eine Kleine Todesmusik (2009) and Osłabić (2010); a member of the band Trupa Trupa, who released their debut album, LP, in June 2011; listed twice for the Paszporty Polityki award (2009, 2010); winner of numerous awards: the Splendor Gedanensis (2011, also nominated in 2009), the Artistic Award of Gdańskie Towarzystwo Przyjaciół Sztuki [The Gdańsk Art Lovers’ Society] (2010), the City of Gdańsk Award for Young Artists (2009), as well as the Władysław Broniewski, Witold Gombrowicz and Złoty Środek Poezji awards for poetry; holder of numerous scholarships (such as: the Grazella Foundation Scholarship, the City of Gdańsk Scholarship); Nominated three times for the Gazeta Wyborcza’s Storm of the Year award (2008, 2009, 2010); He has published in many newspapers and magazines, including: Tygodnik Powszechny, Gazeta Wyborcza, Midrasz, Dziennik, Lampa, Dwutygodnik, Kwartalnik Artystyczny and Odra. 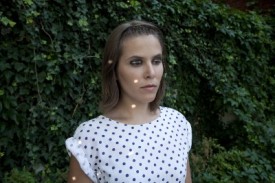 Ola Bilińska, photo Magdalena KmiecikOla Bilińska, born 1986, singer, songwriter and translator, student at the English Literature Department of Warsaw University. She is currently writing her MA thesis on the influence of music, sound and performance on the poetry of G.M. Hopkins, T.S. Eliot and Dylan Thomas. In an attempt to put theory into practice, she writes song lyrics and translates for other bands, most recently for Pustki. Ola sings in Płyny, an urban-folk band from Warsaw, and Muzyka Końca Lata, a group of nostalgic neo-bigbeaters. Her own stage project involving poetry, music and image has started off recently under the name Babadag.