“Art is not about performing visual gymnastics, but about changing the meanings,” Mirosław Bałka said during a meeting in Oxford where he appeared in connection with his two recent solo exhibitions in the UK. London’s How It Is and Oxford’s Topography have proved a genuine acrobatics of meanings, and the British public reacted enthusiastically.

Bałka is well known in Great Britain. His work was first shown at Tate Gallery fifteen years ago, in the exhibitions Rites of Passage and Art Now: Dawn. In fact, Bałka is an artist who likes to present his work abroad. As he himself has admitted, there his work is likely to be perceived in the universal context, unlike many interpretations at home that, often in a shallow manner, read it from the narrow angle of Polish history. 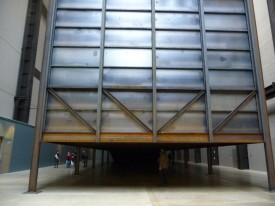 Both the Topography show in Oxford, which consisted of a series of video pieces, and the London installation How It Is stirred up a strong response and a wave of highly varied comments. It has to be said, though, that the coincidence of the exhibition of Bałka’s concentration camp videos with his ambiguous, sense-provoking space of darkness at London’s Turbine Hall was somewhat unfortunate. Some critics, perhaps unfamiliar with the sculptor’s work, interpreted How It Is, more or less consciously, as a reflection on World War II, especially in the context of the extermination of the Jews. An Arts Desk reviewer went as far as to call Bałka a “Holocaust artist”.

Yet in both exhibitions Bałka showed something far more complex, confronting themes important and close to his heart: in How It Is, the mysticism of darkness and light, the idea of a state of transition, and in Topography, the role of memory and the fading away of the traces of history. In both cases, he treated the form itself as an additional challenge. 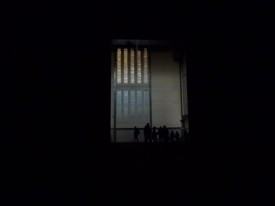 The darkness that was attracting crowds to Tate Modern until the beginning of April was, in the artist’s view, a sort of recapitulation of his work so far. The container-like installation proved exceptional for several reasons. In the most literal sense, it was Bałka’s single largest piece to date, occupying, with its 30 metres of length and 13 metres of height, half of the giant Turbine Hall, harmonising in scale with the museum’s character. For the viewer, in turn, it was a multidimensional experience. When I walked up the ramp and entered the darkness of the velour-lined ‘chamber,’ my senses were disoriented, to say the least, and the space so new and overwhelming that you simply had to surrender to it completely. I found myself in a different state of being and the trip was like an initiation. An initiation to darkness, to something I hadn’t known before, where my previous sensual experiences were of no use at all.

How It Is was inspired by Samuel Beckett’s avant-garde novel of the same title, in which the narrator moves through mud and darkness on all fours, not knowing the answers to the most fundamental questions: where from and where to he is going, and above all – why. Just like Beckett’s text – stripped of the rational cause-and-effect dependence, of the possibility of understanding the sense of human existence – speaks of the state of transition, of the purgatory of religious and literary tradition, so Bałka’s work heads towards creating a new, transgressive space whose elements are darkness and uncertainty. 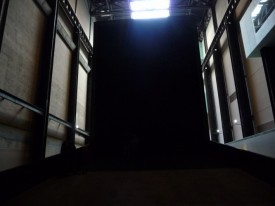 Both works, though so different in their form and character, share a sense of metaphysical anxiety and ambiguity that invites broad interpretations. In How It Is, Bałka confronted not only the ambiguity of the cultural associations connected with the notion of darkness and transiting between one world and another, but also the scale of the work itself. The huge black container had been made to Tate Modern’s measure. No wonder, therefore, that How It Is has been hailed as the best realisation in the Turbine Hall’s decade-long existence.

For his fortieth birthday, Bałka presented himself with a miniature digital camcorder. cameraThus, from a sculptor, he turned into a film artist. His interest in the video medium is predominantly documentary, connected with searching for the disappearing traces of the past. Bałka assumes the role of a witness, a contemporary discoverer of a painful history. In Topography, he showed several videos documenting his personal pilgrimages to extermination sites.

The first piece, Carrousel, screened on the gallery’s four walls, presents the same image spinning around: a winter landscape, the barracks and trees of a concentration camp. A natural reaction to this vertigo-inducing film would be to flee. I found it hard to stay in the room for longer than a minute without experiencing a growing sense of discomfort or sickness. Although the camp is part of our collective memory, its representation, even without any detailed literalness, still horrifies us. Bałka conveys the historical horrors in a subtle, almost poetic manner, by no means depriving them of their power to shock.

Two other videos, Pond, showing a frozen pond into which the human ashes from the crematorium were thrown, and Bambi, documenting a group of roe deer behind a concentration camp’s barbed-wire fence, make a different impression altogether. The viewer receives only black-and-white winter landscapes, disorienting and mute. History and the details of the place appear only later – in the catalogue descriptions.

The viewer’s sense of semantic confusion is overcome by other works (e.g. Flagellare A, B, C): the sound of repeated blows, suggesting we are witnessing some kind of horror. But what exactly? The one that happened seventy years ago and continues to haunt in the recesses of memory? Or history itself that doesn’t stop tormenting us?