Krzysztof Varga’s latest novel commits the sin of extreme resentment. It’s journalistic, literal, written in a rather unsophisticated language – and that’s precisely why it’s worth reading.

Varga doesn’t try to make anyone happy with his writing here: neither the literary critic expecting beautiful phrases, nor the reader waiting for a gripping plot. Some things haven’t changed, though: the author remains faithful to his typical protagonist, a middle-aged neurotic man living in Warsaw’s Mokotów borough and plagued by Polish obsessions. 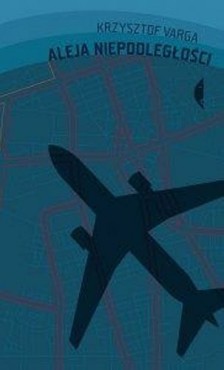 Krzysztof Varga, Aleja Niepodległości,
Czarne Publishing House,
Wołowiec 2010So it has been at least Terrazzo Tombstone, but in Aleja Niepodległości (Independence Avenue) there’s less metaphor and parable and more everyday dullness. Varga’s journalistic background manifests itself here: like in his weekly columns, he wants to summarise for us everything that he doesn’t like about the last couple of years in Poland, all that torments him, all that he hates.

This time the neurotic main character is plagued mainly by the fact of him being a loser: Krystian Apostata’s life has been a failure, he has achieved no success whatsoever; in fact, we can refer to him in the past tense from the very beginning, since he dies in a plane crash in the book’s very first chapter. Varga tackles all the subjects we know from newspaper headlines: a record of collaboration with the communists, lustration of communist agents, media hype, TV pulp.

“Poles know how to lose everything,” we read at one point. Krystian has indeed failed at simply everything and it’s probably the consciousness of his own failure, in an old-school, existential style, that is his only consolation. Krystian’s ineptitude is all the more painful given that  all his life he has had his opposite near him: his childhood pal who succeeds in everything: always getting the best girlfriends (including, of course, the girls Krystian has a crush on), breezing through all the schools, and then making a fantastic career as a celebrity dancer. Varga takesthe easy way out here, though, presenting the protagonist’s opposite as a disgusting mental troglodyte who is only great at making pretty faces for the newspapers. Actually, this is a projection of everything that Krystian hates.

The two main characters of Aleja are flip sides of the coin of success, the success that you can achieve in the not-yet-very-modern Poland: Apostata is an unfulfilled visual artist, his artistic practice combining all the possible caricatures of contemporary art (unfortunately, in his zeal to expose art’s idiocies, Varga falls into somewhat of a frenzy), while his school buddy is a lowlife, nothing but walking proof of the bankruptcy of all the ideas we believed in at the beginning of free Poland. Both serve as an embodiment of our unfulfilled hopes.

What hurts here is Varga’s rather biased description of women: from the absent mother who abandoned our protagonist in his infancy (like in The Elementary Particles), through a bigot and mythomaniac aunt, a secretary who snitched to the communist secret police and “did” Krystian’s father, a caricatural Kasia Kabotyn, to the perfect primary-school girl friend, Andzia Konopek – all of them are co-responsible for Apostata’s failures.

What wins here is nostalgia. Krystian Apostata may be pathetic, he may have failed at everything, he may have found himself aboard a plane bound for America by accident – but he’s still an heir to the intelligentsia tradition and in his childhood, under the covers, he read “Dumas and Doyle, Defoe and Dickens, Lem and London, Scott and Szklarski” – there’s plenty of sentimentalism in evoking this past.

Varga is actually very conservative – that’s the nature of nostalgia. A Polish man can be a flop but the author can’t deny him nobleness. All this sounds very Polish. Which is why, although we could maliciously call this novel a product of mid-life crisis, we don’t laugh at the protagonist but, for some reason, empathise with him and understand the inevitability of his fate.