Mariusz Szczygieł’s new book crosses some borders. Once again he takes us to the Czech Republic, but this time he also crosses the boundaries of reportage. Rather than classic reportage of the kind Szczygieł has produced before now, this is more like a cross between sociology and reportage. This book testifies to the author’s ten-year obsession with Czech culture. It was during this period that he wrote Gottland, a  historical reportage-mosaic portrait of the Czechs and Czechoslovakia in the twentieth century. That book was about the past, and this one is about the present day. 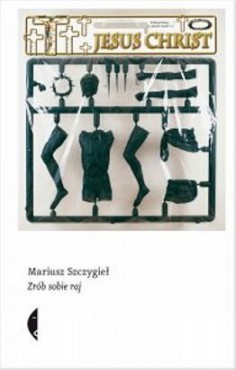 Make your own paradise,
Mariusz Szczygieł,
Czarne Publishing House, Wołowiec 2011Szczygieł watches Czech television and reads popular books, such as a  novel by a young Vietnamese woman about Czech racism. The critics are thrilled, but the novel turns out to be hoax. He goes to cinemas and theatres. He goes to public toilets. At the one on Republic Square he is delighted by the following message on the wall: CHERISH CASUAL KINDNESS AND BEAUTIFUL BUT MEANINGLESS ACTS.
He goes to crematoria. At Ústí nad Labem he finds out that 300 families haven’t collected the urns containing their loved ones, and that the oldest one has been there for nineteen years now, also that more mothers don’t get collected than fathers.

He asks the Czechs, who regard themselves as the most atheist nation in Europe, how they live without God, and whether it’s worth being good if there’s no punishment or reward after death.
He is surprised. He was once described as the most surprised reporter in Poland.
He tries to understand, and he doesn’t judge or condemn.
He starts with his delight at the message by the urinal, and ends by exposing the hidden face of Czech culture – a culture that eliminates everything unpleasant, nasty or painful from public debate. It’s a  culture that refuses to accept anything that’s not peaceful (there are two key concepts in the Czech language: klíd and pohoda, both meaning “peace”; the Czechs are affectionate to these words and lovingly give them diminutive forms). And it’s a culture that turns whatever it can into a joke, that distorts everything. Czech culture, suggests Szczygieł, is the culture of distortion, of avoidance and of bursting into laughter. And the Czechs are a nation that doesn’t like to suffer.
Perhaps they have created a culture that works like an anti-depressant? wonders Szczygieł. But an anti-depressant is a way of running away from the truth, replies the writer Jan Balabán.

This review was originaly published on the Book Institute's website.