The latest film by Łukasz Barczyk combines elements of a conceptual project with the energy of improvisation. The mixture comes as no surprise, considering the cast and creators of the project. On the one hand, there’s the bold, form-conscious director, and on the other — Krzysztof Warlikowski himself, along with actors commonly associated with his plays: Jacek Poniedziałek and Renate Jett. Not only did Warlikowski help write the screenplay, he performs one of the film’s main roles. This list of names, with all the artistic projects they represent, should be enough to make Italiani a film worth waiting for. They might also make one wonder whether the project is destined to preach to the choir of Barczyk and Warlikowski’s admirers. 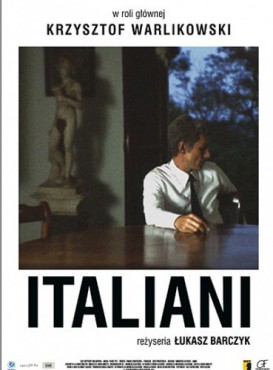 Italiani, dir. Łukasz Barczyk.
Poland 2010, in cinemas 11 MarchThe plot of the film is a variation on a well-known story. A woman has a jealous husband and a determined lover. A confrontation ensues and ends with the death of the husband. The son comes home to attend his father’s funeral. The dead father’s ghost leads the young man to seek revenge against the lover and form a strong bond with his mother.

Why the title Italiani? The film takes place in Italy (a pole apart from Denmark.) The lover is a fascist officer; arias and speeches by Mussolini feature prominently in the soundtrack. There are also numerous shots of the Italian landscape, enhancing the atmosphere of stuffiness and decadence. The location speaks volumes about the concept of the film: the idea behind the project is rather untypical for Polish cinema, a story set in quotation marks, but with the ambition to touch the audience with its intense stylistic measures. We are thus given two answers to the question, “Why Italy?” The first is, “Why not?” and the second is that the film could not take place anywhere else.

Retelling the story proves Barczyk’s courage in dealing with monuments of culture, but it is also relevant because it allows the explanation of the story to be reduced to a minimum and immediately warns the audience not to expect conventional realism. Only the basic, crucial points of the story have been left intact, such the opening scene, where the husband learns of his wife’s unfaithfulness and begins to plot his revenge; or later, when the mother’s lover attempts to placate the son. Everything happens through the language of allusion, part of a game where every word means something other than it seems. The characters know what has happened — it is painfully obvious — and yet nothing is said outright. Two very interesting scenes at the courthouse are an exception. In the first, the son accuses his mother of killing his father, and in the second, the mother accuses her son of violent revenge. The mother testifies in both scenes, and in both her testimony is spoken through tears, as the story of the conflict cannot be told without melodramatic embellishment. But this exaggeration seems not to contain anything but itself, which is precisely what makes Italiani so interesting.

The result is a story focused on form, where the audience recognizes the convention almost from the start, and can thus await subsequent events with the appropriate detachment. This approach helps us notice the transition between refined aesthetics and pastiche, the film’s experimental ambitions (as in the scene with the father’s ghost), and the structure of the narrative, the end of which takes us back to the film’s opening images. The purely cinematic qualities of the artistic solutions mingle with an atmosphere of elite play — an attempt that doesn’t appear quite serious. Barczyk stays within the comfort zone of Warlikowski’s audience: viewers of avant-garde theater who are willing to bear with an experiment and appreciate the charm of a self-referential film in which Barczyk, Warlikowski, and the remaining cast play the roles appointed to them while playing themselves playing the role. The director of the film is thus the experimental director, while his previous projects provide an important introduction to the film at hand. The actors, meanwhile, are the charismatic characters who serve as a pretext for Italiana and are — in a certain sense — its subject. Everything in Italiana is reflected in several mirrors at once.

For an openly niche director like Barczyk, Italiani is an important step — one that might lead to him finding a small but symbolically significant audience, or to finding the right formula, where extreme measures are sufficiently supported by his auto-ironic style of narration.

Krzysztof Świrek has been writing about film since 2007. He has published in Kino, Filmweb, and Stopklatka. He is a student of sociology at the University of Warsaw and a winner of the 1st Krzysztof Mętrak Award (2009).