The focus of their attention was that mysterious place: an island of fire and ice, a land of weird, hypnotic music, a country associated until recently with prosperity and now struggling with fallout of the financial crisis, an island with a menacing volcano (the volcanic ash fiasco, having paralysed air traffic over much of Europe, will probably go down in history as one of the country’s greatest public image disasters). 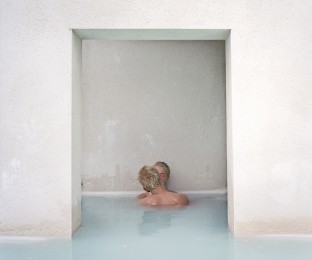 The idea behind the project was simple: each of the five photographers in Sputnik (a photojournalist collective from East and Central Europe) would travel for a month in the company of one of five Icelandic writers. The two person teams were paired at random, explains “IS (not)“ coordinator Marzena Michałek. Both sides were given an opportunity to get acquainted online (the photographers and writers had been equally unfamiliar with each other’s names), after which the journalists packed up their equipment, the writers grabbed their pens/laptops, and set off in pairs in search of hidden people, as they describe them.

photo: Adam PańczukPańczuk and Freyson resolved to do away with the irritating myth of Iceland as a land of elves. It turned out to be a greater challenge than they had bargained for. Talking to members of the island’s modern, pragmatic population, the pair met people who not only professed a belief in elves, but claimed to communicate with them, or at least knew people who maintained close ties to these mythical beings. They found buildings, long abandoned by elves, that still seemed alive with their chuckles. One young Icelandic author recently described her sexual experiences with elves, claiming that the beings knew just the right way to please a woman. She even posited that the world would be a better place if humans had sex with elves. Another Icelandic writer has published a piece on the clothing of elves, in which she describes the textures, colours, and trends of the elven world. What does the photographer Adam Pańczuk think of this? It won’t be too great of an exaggeration to propose that if Pańczuk were to become the official photographer of the elven community, the tiny beings would bear a close resemblance to smurfs. His pictures all employ a number of different shades of blue. The blues bordering on green are particularly seductive. His fascinating pictures of people have a depth to them, conveying the cold and wind lashing the cheeks of his subjects. Among the photos is a fog-shrouded portrait of water – Icelandic gold. 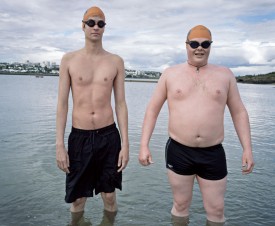 photo: Agnieszka Rayss“We are not water, but water is with us”, writes Sigurbjorg Þrastardóttir, who set off with Agnieszka Rayss in search of Iceland’s “natural treasures”. Water does more than just nourish and facilitate the rhythm of life on the island, it’s a boon for the country’s luxury tourism industry. The pair’s report presents an interesting phenomenon: just as saunas become confessionals of sorts to the Finns, encouraging them to bear their souls by baring their bodies (as witnessed in the recent film Steam of Life), thermal springs in Iceland serve as a space of confession, revelation, and discussion. “There’s no way to explain the phenomenon, aside from saying that when men and women are naked (or almost naked), everyone can talk on an equal footing. No one wears a tie to a thermal spring. No one has higher heels than the next woman,” says Þrastardóttir. 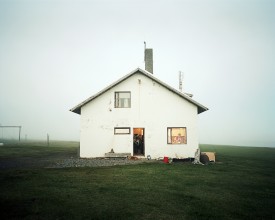 photo: Jan BrykczyńskiA similar equality is evident in the relationship between people and animals in the photo-essay by Jan Brykczyński. “I find it exceptionally appropriate that the shape of Iceland resembles a sheep, lying on the ground peacefully like a lamb, bothering no one,” writes his travel companion Kristín Heida Kristinsdóttir, adding, “It is said that the Icelandic mentality isn’t too different from that of our sheep. The Icelandic sheep, a hardy creature, can survive the harshest cold and long periods of hunger; it is blessed with a good dose of resilience and stubbornness.” Resilience, stubbornness, and fortitude can be seen in photographs of people tending their flocks of sheep in steep mountain valleys, cut off from the jostle and flurry of city life. This aspect of island life is explored by Michał Łuczak and Hermann Stefánsson. The pictures illustrating this chapter of the Icelandic story are black and white, often blurry, every one of them permeated with an unspeakable sadness and loneliness. The accompanying text reveals the key to Łuczak’s poetics: “To live on an island is to be lonely.” Although, “it does not always involve a feeling of sadness, it does not bring happiness, either.” 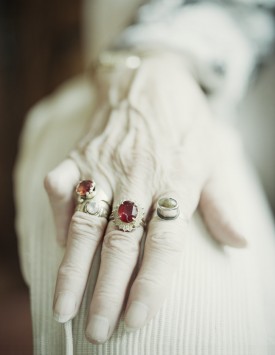 photo: Rafał MilachIt’s not just the people who are isolated. It seems that the objects described in the English-only piece “In the car with R” have nothing but each other, too.
Joined by Huldar Breiðfjörð, who compared traveling with him to “shopping with a girl who wants to try everything on,” Rafał Milach’s collection of photographs reveal his obsessive urge to document everything that crosses his path. Next to small portraits of contemporary and historic inhabitants of the island, he presents such surprising images as that of a wrecked car resting atop a shipping container abandoned in the middle of an empty field. If inanimate objects can be described as mischievous, why can’t they be sad, as well? A thousand things vie for our attention, demanding legitimization of their presence, and achieving astounding success through Milach’s photographs.

The fruit of the “IS (not)” project has little in common with the photographs found in travel bureau brochures, but that might turn out to be the country’s greatest draw. These literary and photographic essays enter into dialog with the non-universal word (in English, Icelandic, and Polish), producing a surprising examination of Icelandic clichés: the belief in elves, the cult of water, isolation, and pastoral life. The excellent concept and phenomenal photography come together into a fascinating album, one just as fascinating as its subject. The “IS (not)” project most certainly is (worth seeing). 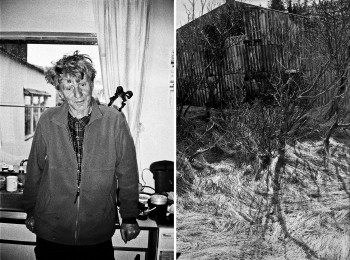