In the musical sense, this release hardly sheds any new light on reality. All the commentary is confined to familiar territory. It will thus hardly come as an attraction to anyone who enjoys confronting that which they do not understand, that which is new and challenging, and which surprises us with its structure or strange sound. But finding new qualities in music does not appear to be the purpose of this album.

The point of GORE – 16th–20th Century Songs of Rebellion and Misery is rather to uncover something new in old cultural material: in the otherwise obscure “songs of peasants rising up against the oppression of the feudal system”, in the fundamental similarity in two cultures of politically-involved screaming. The ambitions end there. 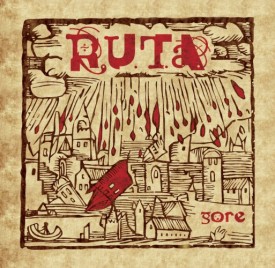 As should be expected of a punk rock crew and their associates, the music is involved. The liner notes feature engravings and the history behind the lyrics: descriptions of relations between the Polish peasantry and the gentry, the serfs and the Church. The analysis is backed up with names such as Tischner, Marks, and Hegel. The artists in R.U.T.A. describe themselves as a “Movement for Utopia, Transcendence, and Anarchy” or a “Reactive Terrorist-Artist Union”, both of which are acronyms that make sense in Polish. Their musical struggle offers a “response to what’s happening in Poland and throughout the world”.

Taking the band’s explanation at face value, we see that the music is in fact written for the words and the context. The bloody lyrics correspond directly to the arrangements. The words, chanted rhythmically and without excessive melody, set the mood for the music, which in turn amplifies the lyrics. It leaves no doubt as to the source of these words: they are either peasant leaders calling for rebellion, or chanting rebels (like at a political or military march). It is they who set the pulse. By submitting to this pulse, we too can feel the zeitgeist of the peasant rebellion. It’s a simple, emotional message, one constantly emphasized by a quick tempo. The rhythm is the backbone.

The ideal audience at a R.U.T.A. concert would consist of people with the capacity to switch their thoughts off and not think about whether the music is “good”. The audience should submit to the trance and the sound, assuming a dance-driven, rather than intellectual, approach. It is only then that they will feel the meaning of the lyrics, the emotions that give rise to the rebellious content. They will feel it in the voice of Spięty (heard reading on the track “Lament Chłopski”), who has accustomed us to the piercing solemnity of his voice. The rest of the songs might not be as memorable by themselves. There are a few interesting melodies, honest energy, and some punk rock spirit in folky, acoustic arrangements (apparently in keeping with the idea that they not use the guitar wherever it would have been most appropriate to do so).

The album could be described as a musical treatise on anthropology (which is precisely what makes it unique), updated with punk rock themes and modern production value. It uncovers an ever-attractive form of energy and emotion, strengthened by the harmony of strings and vocal chords along with trans-folky drumming.

Levity was founded in 2005 as a result of a meeting between two composers – pianist Jacek Kita and percussionist Jerzy Rogiewicz – and jazz contrabassist Piotr Domagalski. Experience Levity in a three part drama