Following a series of crude, clunky, embarrassing but audience-pleasing comedies such as God’s Little Garden and God’s Little Village, Jacek Bromski has opted for an entirely different genre: the crime film, in its dark and political variety. His latest picture, Entanglement, is based on the 2007 novel by Zygmunt Miłoszewski, which garnered enthusiastic reviews from literary critics and connoisseurs of the genre. Bromski and screenplay co-author Juliusz Machulski have deviated significantly from the letter of the original, moving the location of the events from Warsaw to Kraków and modifying the main characters and the relationships between them. They did retain, however, the novel’s dramatic structure and the characteristic world depicted within it. The result is a piece of truly decent genre filmmaking that can be viewed with genuine pleasure and no embarrassment. 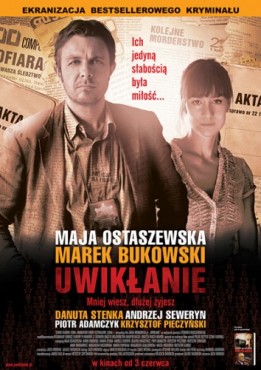 Entanglement, dir. Jacek BromskiThe film starts like a classic Agatha Christie whodunit: a remote mansion in the suburbs of Kraków is the scene of the murder of a wealthy, middle-aged man taking part in closed Family Constellations therapy sessions. There was no one in the mansion at the time of the murder besides the therapist and the three other participants of the workshop, making them the main, and practically sole, suspects.

A young, ambitious female prosecutor and a somewhat bitter, weary policeman are put on the case. Although she is married and has a family, there is a palpable tension between the pair, who once dated in their first year of law school. The tension gives way to a passionate affair (the romantic subplot is definitely the weakest part of the film). The investigation itself takes an unexpected turn: the victim is discovered to have been a former Security Service officer with business and personal ties to buddies in the defunct communist secret police — friends who have made a fine living for themselves in the new capitalist reality.

Following the lead, the character enter a world of former secret police officers, their big (and not always clean) financial dealings, historians from the Institute of National Remembrance and crackpots too radical even for that office, who spend their entire lives tracking the shady dealings of former “comrades from the secret police”. The film makes a smooth transition from a classic murder mystery to a conspiracy thriller.

Despite all its front-page props, Entanglement is no “right-wing” film; it ultimately does not succumb to the political narrative that blames all the evils of contemporary Poland on a cabal of former security officers. Not just because right-wing parties have abandoned that narrative in recent years: an aspiring middle class living in a seemingly “normal, European country” suddenly encounters a grim, downright criminal coterie with roots in the ancien régime.

The fundamental challenge in any right-wing politicisation of Entanglement is that in Bromski’s picture, the secret police, the “cabal”, and the historians from the INR are all purely formal, tame, recognizable elements of the genre — merely a part of the cinematic convention. The film could just as well take place in the US or Italy, replacing the former secret police officers with corrupt policemen in cahoots with the mafia, or members of the Propaganda Due lodge. This point is particularly emphasized by Andrzej Seweryn’s role as the “capo di tutti capi” of the former secret police (at least in Kraków). Seweryn’s character is a textbook example of the of a cold, ruthless, diabolically intelligent villain whose witty cynicism is just as revolting as it is secretly admired; roles like these are cinematic favorites. The end result is more a play on the genre than an example of right-wing historical politics.

The play doesn’t always work out right. Which is what makes Entanglement a less than outstanding picture, one that fails to broaden the horizons of Polish cinema but nevertheless provides us with a proper dose of entertainment. Jacek Bromski has taken the contemporary Polish crime film and directed it in a manner that displays an awareness of convention, and he can be proud of the results. The least his film deserves is our good will.