“They want me to die on stage. To masturbate, to vomit. And finally, at the end, to slit my own throat,” said German artist Joseph Beuys about audiences. Doesn’t it seem strange to you that this is not what the audience expects from a poet during a poetry reading? The poet usually leaves the stage embarrassed because they know how little has just happened, how little chemistry there was – none at all. Grim stories about “blown”, misrecited or downright murdered poems have always circulated in bars and editorial rooms. Memories of poetry readings that became events, going down in history as unforgettable, exceptional, are rare. The tone in which they are recounted suggests that the listeners (viewers) took part in a genuine ritual. Comments like “he read standing for three hours” or “suddenly the room went quiet” or “it was as if everybody was hypnotised” clearly show that we are dealing with the sphere of the sacred. 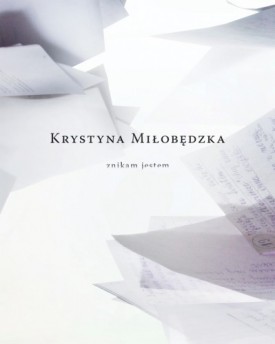 Krystyna Miłobędzka, znikam jestem
Editor: Jarosław Borowiec,
Biuro Literackie, Wrocław 2010The phenomenon of the public poetry reading as well as – more broadly – of text functioning outside the written page has in fact been poorly described in the academic discourse. It’s also virgin territory in editorial writing. We seldom get reviews from such events. The reason is the poetry reading’s unclear constitution. What is it supposed to be: a mini-theatre show? Or rather a performance? Despite the usual props – the proverbial candle and potted fern on a table, readings and series of questions – this theatre has no proper rules and everyone understands it a bit differently. The audience in this case are readers, uncertain of what they can expect there. The miracle-makers themselves usually know little more and are almost certainly doomed to fail, if only because they are usually poorer (as an actor) than their text (as text). And yet there are several poets in Poland who have turned poetry evenings into an (artistic) genre in its own right. Whose public readings are always charged with emotions and invariably attract crowds of faithful followers. Among those poets are, for instance, Eugeniusz Tkaczyszyn-Dycki, Andrzej Sosnowski and Krystyna Miłobędzka.

Those who have admired the conciseness, purposefulness and cohesiveness of Miłobędzka’s poems won’t be disappointed by her presentation, which is equally well thought-out and intelligently structured. Rather, they will seriously wonder whence the brilliant composition, the fine pace, the great architecture of the stories, anecdotes, reflections? Well, the author of “all-poems” scripts her readings like dramas, scripts, and speeches, without losing warmth and naturalness and using the text only as a frame, a prop. There is respect for the reader, the listener, in this, a desire for perfection, an affection for the word. But also the fear that she may say something clumsily, accidentally. And, as she said in an interview, words can’t be simply taken back.

So those who, as Beuys said, would like the artist to waver, to slip, to show that they are human, damn it,and can be weak, tired, not up to par — they may feel disappointed at a Miłobędzka reading. And, another question, what to do with the text – written down, ready to be read – that is left after such an evening and lies dormant in some legendary folder? Jarosław Borowiec came up with the smart idea of publishing those “evenings” – with the poems woven into them – in the book znikam jestem [I disappear I am]. This allows us to examine the composition of the public poetry reading from up close. There was once a dispute in the world of the visual arts whether documenting performance art didn’t contradict its definition (the only definition of performance art is precisely its ephemerality, its duration in real time). Some even believed that performance documentation was an autotelic work of art in itself. How do we interpret Miłobędzka’s “evenings” collected in this volume in this context? The sense of discovering a mystery that accompanies these unique meetings dispels all doubts. What is left is the pleasure of reading.

“Good evening, ladies and gentlemen!” Miłobędzka writes/says in the opening “evening”. “Good evening! I will be talking about poetry. Poetry. When my mother made a good cake, she would say, ‘This isn’t a cake, this is poetry.’ And then she would add, ‘Tastes heavenly.’ What can you talk about during a poetry reading? You have no choice. You have to talk about life and about writing.” And that’s precisely what happens. We, for our part, can watch how Miłobędzka’s life filters into her poems, how it connects, intertwines and finally merges with them. After just a couple of pages we notice reversed proportions:less and less life, more and more writing. “Always the same unnarratability.” And a persistent effort to break the deadlock.

Surrealism in itself has something lightweight about it, like playing, dreaming. Here, it’s sometimes simply a metaphor of evil, fear, quite real pain