The tensions in Justyna Bargielska’s new poems stem not only from a distorted, fractured syntax that goes against our linguistic habits. It’s also the dissonance between a fairytale world, a unique (childish? surreal?) perception of the world, and gloomy images – a bald stubble-field, a coarse hand, a grave, all streaked with an undertone of death. The very association of these worlds, their surprising cooperation, appears horrible, unacceptable, confusing. A poem in the style of a Grimm fairy tale? In the style of a child’s utterance? (“Mummy, we’ll be lying together like this until we die! Together!”). 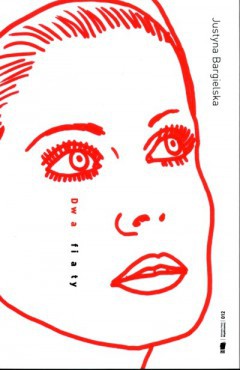 Justyna Bargielska, Dwa fiaty,
Wojewódzka Biblioteka Publiczna
i Centrum Animacji Kultury,
40 pages, Poznań 2009Contrary to the stereotype, childhood is a world full of death, darkness, uncertainty, and anxiety. Dariusz Suska tried to disenchant the falsified land of the meek in Cała w piachu (All in sand) but he adopted a different perspective and form. The rhythmicity of those texts, encrusted with bleak humor, was a mix between lamentation, playground rhymes, dark lullabies, and a prayer. Bargielska takes a different path: childishness is not inseparable from the child. Rather, it is a way of viewing the world, one of free imagination, budding wild fantasy, lively surprising surrealism (a rainbow-colored cat, cats in prams, a bus with an iris tree). In Bargielska’s poems, death is also less direct (although it happens that we watch the funeral of a mouse from a frog’s eye view, corpses, and dead bodies). We read it from traces, broken sentences, afterimages, allusions, tensions. And even though sometimes it remains in a state of dormancy, suspension, it smolders between the lines, patronizing the whole volume, holding all the threads, tying them. A man carrying footballer figurines heads-down, a miller woman resurrecting meat – such are the images that flow from this world. “Appearing out of nothing butterflies or rainbows / you take for what they really are – harbingers of sudden death / yours and of your own for many generations in all possible directions.” “Poem, tell me something, tell me how many children I have, which one casts the longer shadow and how long I will live with this.”

Justyna Bargielska's poem in English soon in the Fiction section.

Surrealism in itself has something lightweight about it, like playing, dreaming. Here, it’s sometimes simply a metaphor of evil, fear, quite real pain. We can easily find a gaping breach under these heartening images. Hence Bargielska provides us with a “neverending feeling of disaster” already on the level of syntax. But this won’t be a spectacular catastrophe, rather a human-scale failure, an almost invisible flaw, a barely perceptible rockburst, a millimeter shift. The greater the protagonist’s loneliness – only she knows what is under the pile of glass that is like snow. Horror is thus low-key here, almost intimate. Which allows us to suppose that the threat is not external: rather, this kind of perception, reading the signs, has entered the protagonist like a disease, infected her. Some affliction has made her world view distorted, filtering the picture through smoky glass. “Fear like from an old book,” the first poem begins. And yet these are not explicitly “black” poems – there is too much love here (though usually in onerous, past-related contexts), too much sensuality (bellies, eyelashes, infants). Bargielska is too intelligent to be unambiguous. Her protagonists’ stance towards the world is complex – she likes this world painfully. She’s also mischievous, amusing, all the time remaining far from enthusiasm or over-optimism. And we can’t accuse these poems of being malcontent or decadent. The protagonist is far from apathetic. There is amazing energy dormant in these texts.

Then there iscredo (à rebour), one of the most emotionally moving ones in contemporary Polish poetry. After Świetlicki’s “I have little God in me / cultivating the shred / the clot,” comes the protagonist’s confession as she doesn’t know what to think about God when instead of a blue river or an eon of bubbles he prefers to appear as a bald stubble-field, an endless edge, a plea in a mirror crèche: “Unstoppable divisor, with the coarse hand of yours / For infant post-mortems, I don’t know if I want / You to touch me. I’m telling you, really.” The acuteness of these poems is enhanced by the fact that these are images, thoughts, distilled, combed from overtones. Self-focused, closed. Their power also stems from their conciseness, their quick metaphor, a firmness that implies a ruthless certainty, perhaps even lack of hope, of alternative, an impossibility of changing the perspective, the options. No need to argue, ladies and gentlemen. We all know perfectly well that this can’t have a happy ending. Because in counterpoint to the surrealistic imagery and childish syntax adulthood appears as an attitude marked by disillusionment, irony, and scepticism. This impression is strengthened by phrases such as “and I can’t help this,” “I couldn’t promise you,” “anything can happen.” There is a gloomy determinism in this. Passivity. No need to be running around in circles when the key moments of our lives have already been written for us. Faith is shaky, weak. It remains a form of enchanting reality rather than a conviction, hope. This grown-up acceptance of any other (bleak) scenario is moving (and frightening at the same time). In this context, the only sensible reactions are those from another paradigm (fairytale?), another narrative: such as pasting bird images from a calendar on your walls. Since only they protect “from vermin and humans”.

Those who have admired the conciseness, purposefulness and cohesiveness of Miłobędzka’s poems won’t be disappointed by her presentation, which is equally well thought-out and intelligently structured