Kuba Borysiak: “The Kalevala tells the story of the first kantele, which Väinämöinen built out of fishbone. It is also said that a kantele was once found with a bow – is this the jouhikko?” Pekko Käppi: “Yes, in a way…. There was a serious debate between ethnomusicologists in Finland whether Väinämöinen originally played the jouhikko or the kantele. Well, for me this is a bit funny because if Väinämöinen was the greatest and most powerful man in the world, he surely played both!”

This fragment of a conversation with one of the special guests of the 13th edition of the New Tradition festival – a virtuoso of the ancient Karelian lyre, the jouhikko – aptly reflects its spirit. The event brings together musicians from various milieus (from academics, through country musicians and urban enthusiasts, to high school students), every one of them a “fanatic” of a narrow field – a particular instrument (be it the hurdy-gurdy, the Biłgoraj suka, the Płock fiddle, the Sieradz bass, the gajda or the gęśle), a specific vocal style (from imitating the performance of country babushkas to sophisticated actor etudes) or region (such as Mazowsze, a region nowadays generally considered devoid of any musical mysteries).

At this festival, even the master of ceremonies, Krzysztof Trebunia-Tutka, is a master of several charmingly named archaic instruments and his announcements, delivered in highlander dialect, encrusted with canonical little songs, are truly gems of the Podhale style. 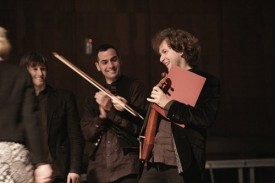 Krzysztof Lasoń - The Golden Gęśle Award
(Grzegorz Śledź)In the Roots Music section, the main theme of this year’s New Tradition was precisely Podhale. The festival program quoted a nostalgic text by Józef Tischner (Nuta o Ślebodzie [Note on freedom], 1993) about a special relationship between folk culture and folk artists’ experience of participation in the “stream of life”. Tischner attributed the crisis of folk culture to the decline of certain modes of man’s participation in life, which necessarily leads to a “decomposition of some important truth about man”. He also wrote, “It is in culture that freedom manifests its creative potential. Folk culture was and still is a living testimony to the freedom of the people…. Art makes you free. When [folk] culture speaks about the demon, it means man is no longer in the demon’s power.” Though these observations seem obvious, they still raise topical questions: what kind of art would be able to tame the contemporary rural demons that are no longer disarmed by traditional songs that refer to the pre-mass-media and pre-Radio-Maryja reality? Does the inhabitant of a present-day “global” village in Podhale have a chance to maintain the autonomy of creative thinking in the face of the concentrated scale of global disasters that pour on him daily from the TV screen? What should his stance be towards a reality in which the everyday points of reference of his small, familiar world are situated in virtual space, thousands of kilometers away?

A partial answer to these questions is offered by the work of the winners of this year’s main prize and of the audience award. Wołosi & Lasoniowie are two classic and three folk musicians (two violins, viola, cello, double bass) who oppose “segregation of their respective musical worlds” on principle and eagerly use open doors to various musical spaces while avoiding excessive, meaning-diluting eclecticism. It’s not without reason that they refer in this to Bach’s gavottes, Chopin’s mazurkas, and Wieniawski’s oberkas and kujawiaks. Though not rooted in any single locality, their music is cohesive, very energetic and, as a result, hypnotizing. Folk motifs are sublimated into sophisticated constructions and the scenic expression of the musicians, who remain in special state of mutual tension, accounts for the intensity of this musical entity. Freeing this kind of energy is usually the domain of Balkan musicians and yet Wołosi & Lasoniowie prove that similar energies can also be released north of the Danube.

The strength of the creators of New Tradition resides in the fact that they have consistently pursued two separate approaches to folk music. In the Roots Music section, they demonstrate the power of traditional, rootsy, archaic performances, whereas in the competition section they welcome far-reaching artistic experiments and searching for new meanings.

They neither impose their own preferences nor any “correct” approach to the art. As a result, the Polish Radio’s Lutosławski Studio becomes a meeting place for worlds normally incompatible, and the excited listener, traveling in the course of the several evenings through the remote parts of this musical cosmos, experiences a wide range of extreme emotions. Let’s hope that the Radio Centre for Folk Culture survives the current political turbulence, since one can hardly think of a better or more modern fulfillment of the public media’s cultural mission.

The creator of ‘Prolog’ explores the possibilities offered by social choreography, provoking in the audience a more conscious perception of the web of connections comprising our social identity