Although formally Stanisław Dróżdż (1939-2009) had a degree in Polish language studies, he was also a member of the artists association (a fact eagerly emphasized by all those associated with the visual arts), as the writers’ union did not accept him. In the beginning of his artistic work, he was more interested in derivatives of words, but over time his principal creations, the “Concept-Shapes” and “Concrete Poetry”, shifted to completely inconcrete works and totally shapeless shapes. 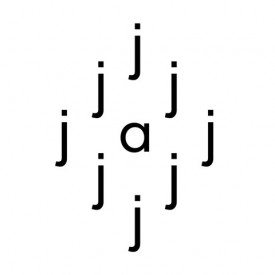 Stanisław Dróżdż,
Untitled, (me) part 1, 1998His thoroughly indiscernible, unrecordable and unpresentable experiments climaxed with the installation “Concrete Poetry” (Foksal Gallery, 2002). It was arranged within the same small space which had hosted his most famous project “Between” in 1977, and in some way it was its antithesis.

The essence of the installation “Between” which was made with letters, but not words, was to take possession of the entire space of the Foksal Gallery. The “between” from the installation’s title filled up every space and became a metaphor with an infinite interpretative potential, although the word “between” as a whole was not written anywhere in that space. The installation leaned more towards poetry and the word, thus favoring concrete reality.

“Concrete Poetry” of 2002 filled the same gallery space with something completely inconcrete, unknowable, unrecognizable, and yet something much more, it seems, poetic: a tangle of lines. Lines stretched between all the walls of the gallery physically filled its space, making it impossible to enter. The white diffused light seemingly made it easier to look at, while in fact making the space even more inaccessible. 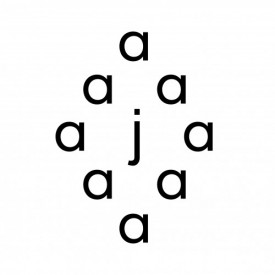 Stanisław Dróżdż,
Untitled (me) part 2, 1998The exhibition “Beginningend” at the Warsaw Centre for Contemporary Art (21 December 2009 – 21 February 2010, curator: Elżbieta Łubowicz) reconstructed these projects, offering real and literal contact with the entire artistic output of Stanisław Dróżdż, an artist so concrete and so elusive at the same time. Dróżdż, a thoroughly religious man, recognised himself as a tool in the hands of the Almighty, leaving the executive power to him. His artistic work, or so the artist felt, was the fulfillment of divine ideas, a kind of divine concrete reality. If we accept that “in the beginning was the Word,” it is easy to imagine a hegemony of concrete words written in any language.

Dróżdż also used some other concrete things derived from the world of objects. His projects, besides letters and numbers, included watches, doorknobs, checkers, chess and dice. There were also geometric figures, peculiar charts and logic games that mixed up textual and mathematical orders. The artist's works evoke associations with the work of Arman, yet remain in such a great and subtle distance from his concrete reality that such juxtapositions seem to be too belittling to Dróżdż. 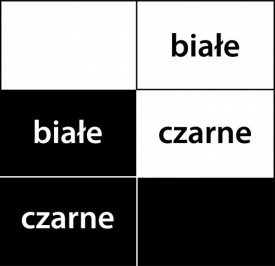 Stanisław Dróżdż,
Untitled (black&white), 1970The whole exhibition employs black and white. We may actually miss this fact, as the aesthetics of words are largely a consequence of print (and print clearly puts us in the world of opposition between black and white), but if we do, the basic chromatic and aesthetic characteristic of this work will escape our notice. Dróżdż had a very deep understanding of the verbal-linguistic structure of our world. He said in an interview: “Words don't lie, but sentences do. A word cannot lie. But put three words together and distortion begins.”

To Dróżdż the word is an image, an extremely complex image. If we quote one of his most famous verbal concrete works, we will find all of his uncovering and constructing intellectual strategies:

A unique figure. Analyzing it evokes a mental draft with a great refreshing power. Concepts like these opens one’s head. Before Dróżdż came up with this type of graphic, verbal, and intellectual game, he wrote poetry that still deserves to be promoted. In fact, it lies at the beginning of his road and is certainly less known to both writers and artists. But one example:

So, speaking extremely briefly: give everyone what they want least.

Dróżdż once said in an interview, very categorically: “An art historian might make a mistake. Please indicate clearly in your text that Dróżdż says he has nothing to do with art, but rather with poetry.” But it is impossible to agree with this self-commentary. Dróżdż combined the experiments of many fields and in this sense he remains a patron of many phenomena in the art of the second half of the 20th and early 21st century. The exhibition prepared as a retrospective has become posthumous.

[1] The word “forgetting” written a number of times one below the other. In each consecutive line the word is reduced by a single letter [translator’s note].