Kazimierz Kutz is a man of many talents and interests. Until now he has been most acclaimed for his film-making, but lately he has been making a name for himself as an extremely interesting writer. His first novel is set in Silesia, which is no surprise, as he was born in that region and its problems have always been close to his heart. Without much of a stretch, the book can be regarded as a disguised autobiography, because the narrator – one of the Basista brothers – and the main characters are, like the author, people born at the end of the 1920s in Szopienice. 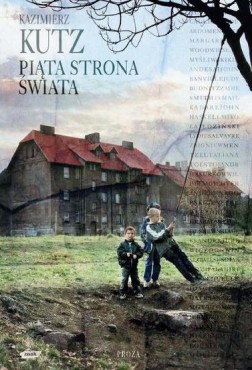 The Fifth Point of the Compass,
Kazimierz Kutz, Znak Publishing House,
Kraków 2010As the result of a serious accident, Basista suffers paralysis and comes home to his mother in Silesia. He also finds out that two of his close friends have committed suicide. These events prompt him to make a journey into the past. He painstakingly recreates the story of his own life, and of the friends and acquaintances who during the war jointly created something like a self-education group, as he tries to investigate why their fortunes have turned out one way rather than another, and to understand the meaning of the choices they have made. In the novel’s meandering narrative full of digressions three main themes stand out: stories about the lives of the narrator and his close friends, anecdotal tales full of local colour about life in Silesia that go way back into the nineteenth century, and thoughts about the history of Silesia and what it is to be a Silesian. Kutz moves elegantly from biographical details that show the multitude of types and life strategies among his compatriots to generalisations that encapsulate their experiences. And he comes to some sad conclusions. In Kutz’s view Silesia is the “fifth point of the compass” of the title, a place that both exists, and at the same time does not. During the past hundred plus years this region has functioned within the sphere of all sorts of state bodies, without ever being fully colonised, but without ever gaining any sort of autonomy either. Time and time again, Silesia’s terrain has been ploughed up by “history unleashed”, complicating the fates of the Silesians. The Fifth Point of the Compass is inter alia about how difficult it is to be a Silesian. However, it is not just a veritable mine of knowledge on Silesia, but a universal story about struggling to cope with being different.

Kazimierz Kutz (born 1929) is a well-known film director, screenwriter, essayist, publicist and politician. The Fifth Point of the Compass is his literary debut.

Szczygieł’s idea involves showing the past twenty years in Poland mainly through the stories of individuals struggling with the better or worse consequences of the country’s changing social, economic and cultural situation