In recent years reportage has been without doubt one of the most interesting features of Polish prose, as confirmed by the success, abroad as well as at home, of a series of books by the reportage writers of the middle generation. Further confirmation comes from this anthology, conceived and edited by Mariusz Szczygieł, presenting reportage written in the past two decades since the fall of the communist regime in 1989. 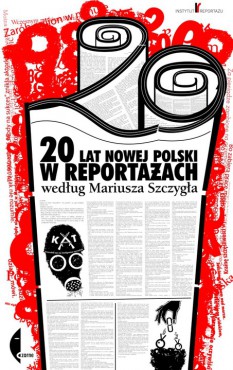 Czarne Publishing House
Wołowiec 2009, 472 pages paperback
Translation rights:
www.polishrights.comThe collection includes twenty-six articles by more than twenty leading reporters. In most cases they have been or are journalists working for Gazeta Wyborcza, which is no surprise, as that newspaper has developed what is definitely the best reportage department in the country. Szczygieł has used the formula of the topical anthology, juxtaposing articles that describe “where the new Poland began and where it has got to” (Instead of a Foreword). He specifies what sort of Poland most interests him: “Not the one we see in the Sejm, or on the front pages of the newspapers.”

Szczygieł’s idea involves showing the past twenty years in Poland mainly through the stories of individuals struggling with the better or worse consequences of the country’s changing social, economic and cultural situation. Most of these reports tell the stories of entirely anonymous people, for example a woman whose passion in life is watching television serials (Dr House: You Can Live Without Love by Joanna Sokolińska), but the anthology also includes stories that were famous in their day, such as the one about the businessmen who were dragged by a criminal into a spiral of fictional debts, and when driven to extremity decided to murder their persecutors (The Widow Luiza Goes To See “Debt”, by Irena Morawska). Each of the reports contains a separate story, but put together they form a sort of collective portrait of both the Poles and contemporary Poland. Szczygieł’s anthology also reveals how diversified and different in form the reports can be, and what an interesting and effective tool for describing the world they can be in the hands of these seasoned reporters.

The review was originally published on the Book Institute’s website.