In his work Marian Pankowski very often returns to the idea that the Second World War was the turning point of the twentieth century. It was a moment of compromise for all faiths, beliefs and ideologies. And only the body emerged from this oppression whole.

For the body was the ultimate, though not always the overt aim of military, concentration camp or totalitarian activities. Everything that people tried to do in the first half of the twentieth century can be explained as an attempt to place the collective body of society within the order prescribed by an ideology. 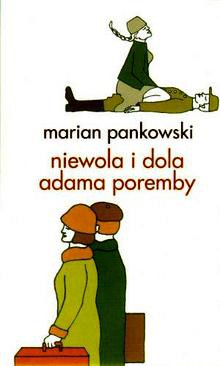 Niewola i dola Adama Poremby,
Korporacja Ha!art Publishing House,
Cracow 2009, Translation rights:
Marian Pankowski
In his latest book Pankowski remains loyal to his instinct, but this time he goes back to the days of the First World War. The novel is set in the Galicia region, in the Small Town, which is a typical rather than a specific place. Just before the First World War, the capable carpenter, Adam Poremba, marries the daughter of the local assessor. Their marital bliss is cut short by mobilisation; before he has even seen battle, Adam ends up in Russian captivity where, partly forced and partly of his own accord, he becomes the lover of the prison camp’s female administrator. Meanwhile his wife, Katarzyna, has an affair with Iwaszko, an apprentice carpenter. Some time later, for lack of any news from her husband, she gets a divorce and marries her lover. Several years after the war, when Adam finally shows a sign of life, Katarzyna decides to leave for America with her new husband. Adam goes back to the Small Town and sinks into depression; he does have a short romance with Zosia, who comes to help him at the farm, but gradually the life in him is fading. One day he dies, sitting in an armchair by the fire, as he hears his Russian lover summoning him to join her.

Born in 1919. A poet, novelist, dramatist, literary critic, literary historian, translator and emeritus professor at the Université Libre in Brussels.

What exactly is this story about? It is definitely not a revision of history. In this book the events of the early twentieth century are treated irreverently, like an object. Pankowski’s main interest can perhaps be defined as a view of collective history through the adventures of the body. So maybe the novel is about the fact that the body wants more. It wants not just pleasure and the warmth of another body, but also the simultaneous experiences of controlling and submitting, seriousness and fun, struggle and ritual. A body like that changes the concepts of “nation”, “state”, “Pole”, and “Ukrainian” into blissful experiences. Man, as Pankowski’s tale suggests, is just a body seized by desires, and national identity is just an element of our erotic dreams.

The review was originally published on the Book Institute’s website.

The novel is not carried by chronology but by the rules of a saga. Characters, however, appear not because they belong to the family but because of fortuitous meetings