I have to start by saying that two years ago I voted for Barak Obama for president. So, Wednesday 3 November was a sad morning for me. The Democrats lost the House, the Republicans and the Tea Party candidates triumphantly announced the beginning of a new era. The concession speeches of those who lost were full threats and tirades. Even Jon Stewart’s satirical program capping the electoral results was not fun. Its emendation of Obama’s presidential election slogan was the funniest and also saddest part of it — the program was called “Maybe we can’t”.

So, I did what a Brooklynite can do — I went for a morning jog to the Prospect Park. It was very reassuring. The park is a younger version of Central Park in Manhattan, built by the same architect who, we the Brooklynites like to think, learned from his Manhattan mistakes and created perfection. The very idea of providing the people with a large green space in which to freely congregate was truly democratic. And indeed, the park is an image of democracy. In the morning all Brooklyn dogs run free here, barking in all their languages. They are of a hundred races, from serious giants to toy-like puffs, and their owners call to them with the most incredible names. The owners’ voices always make me laugh: they range from cajoling and sweet to very authoritarian. And, I assure you, to see a beautiful English meadow full of frolicking dogs does assuage political anxieties of the morning after a lost election. 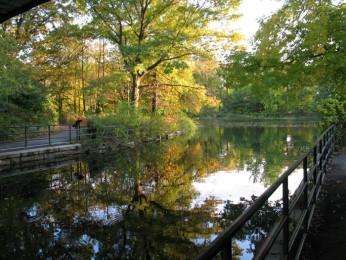 But the dogs are a tiny minority of the Prospect Park habitués. The park is in constant use by people who exercise their bodies and their minds. The road circling the main meadows is a terrain of peaceful though tense co-habitation between bikers (looking like butterflies in their beautiful outfits), roller-skaters, parents with exercise strollers, runners, joggers and simple walkers. The degree of devotion to movement is varying: I have three categories I place joggers in – lazy, nonchalant, determined. They represent all the kinds of people that inhabit Brooklyn, from grave Orthodox Jews and charming Caribbean beauties to entire classes of kids mixing all races and languages. People’s colors, clothes, hairdos are a thing to marvel at. And their shapes! Their shapes! To quote from Miron Białoszewski’s The Ballad of Going Down to the Store:

that you did not see

Since I am jogging/walking against the current, I also catch snippets of conversations among all these people — and there are so many who talk running or walking in groups.  Even bikers converse — not only those who are lazily circling the park, but also those who are participating in races. Today there were few opportunities to hear people talk, and only a few commented on elections, while most spoke of the usual things (“…by the time she dies somebody else will take her job…”). The main discussions were, as always, about relations. Life goes on, I thought, a bit astonished at the lack of interest in politics. Only the man whom I am calling The Mayor of Prospect Park was loudly expressing his enthusiasm for the new Governor of New York, Andrew Cuomo. The Mayor of Prospect Park is there every morning, walking backwards (yes), and talking to his many acquaintances. He especially likes the evoke giggles from groups of women.

The park recently went through a great turmoil: a twister, passing through Brooklyn and Queens, uprooted more than three thousand trees. The morning after that hurricane the park looked devastated, with gigantic trees stretched on the ground, with their roots sticking up like broken arms. It is now less dense and has an air of a person who tries to look very dignified. The surface of the little lake I pass by on my walks peacefully reflected a clear sky. Like in an Indian carpet, the leaves of the trees displayed all shades of brown, yellow and red. The green of the meadows was attenuated by morning frost.  It was all very calming.

The moment I left the park, a helicopter appeared over the adjoining plaza. And my eyes focused on the great arch with martial sculptures celebrating the victory of the North over the South. I quickly trotted to my apartment. To savor for a while longer the image of the democracy of leaves.

I try to take a close look at the world which is seemingly unattractive. After all, what can be attractive about people being confined to their beds and undergoing chemotherapy? But to me, that’s interesting. I don’t look for outward attractiveness

The word ‘liberature’ is a kind of an umbrella term that merges the meaning of the Latin ‘liber’ as ‘free’ with that of a book: it thus connotes both creative freedom and the sense of the book as a material object in the artistic message. The book does not contain the work – the book IS the work

Fan creativity began with short stories, but already in the 1980s montage films, created on the basis of official, professional productions, played an important role in fandom output

Touching is what is needed. Memory doesn’t hold the map

It is the centenary of Czesław Miłosz’s birth, and I am trying to understand the origin of my attachment to this poet

Actresses or not, we all struggled with difficulties, perhaps greater perhaps lesser, but most certainly somewhat similar to those faced by our contemporaries who did not emigrate

In his native language, the tone, the gesture, the emotion is fully controlled; in English, it is the effort of sounding the words that predominates. The difference in self assurance is striking