Perhaps I should start by saying that Today We’re Going to Draw Death by Wojciech Tochman is a book about the Rwandan Genocide, and that it’s an attempt to find out what the lives of the perpetrators and their victims are like sixteen years later. Perhaps I should say that Tochman, like many journalists before him, tries to answer several painful yet necessary questions. For example: how did this happen? Who was behind the genocide? Radio Télévision Libre des Mille Collines? Psychopaths? Boys and girls from the neighborhood? Why didn’t anyone stop them? Who (or what) made these people kill about one million Tutsis within one hundred days?

And also: will we every find answers to any of these problems? And who could help us find the “right” answers? As well as: why are we “forced” to confront a massacre that even the sick imaginations of the most perverse horror novelists could not produce? 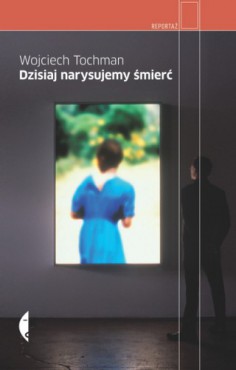 Today We're Going to Draw Death,
Wojciech Tochman,
Czarne Publishing House, Wołowiec 2010Perhaps the introductory sentence of this review should be different. Perhaps I should write that Tochman’s book is like a sudden slap in the face, one that knocks us off balance and effectively delays our return to reality. The candid option ― “I really don’t know what to say” ― seems most appropriate. Survivors could choose to answer the same way when prompted by reporters, but they wouldn’t be dodging the question; they bear the unimaginable weight of the memories of April 1994 and the subsequent months (an interviewee named Leonard says, “It’s not a tragic memory. It’s not a memory at all. It’s now, this is happening.”)

Then there’s the lack of words experienced by a journalist who has returned to Rwanda several times for us (in both senses) to talk to judges, psychiatrists, monks, and soldiers, and gathers the testimonies of perpetrators serving prison sentences, raped women, and children who have, by some miracle, survived. Having spent two hours at the Kigali Memorial Center, Wojciech Tochman writes: “Is what I have found out enough for me? Can I go home now? A Brussels Airlines flight could take me back to Brussels in just a few hours. What else do I want to learn here? Aurore Kirezi, two years old, wearing a dress ― I’ve got that written down. What else is keeping me here? Françoise Murengezi Ingabire, twelve years old, enjoys chips and Tropical Fanta ― I’ve got that, too. What else do I want to examine here, what taboo do I wish to touch? What fear do I wish to experience? What border do I wish to cross? And why?”

There are survivors who are still unable to talk about “it” after all these years and prefer to stay quiet or simply point: “Our house was here,” “I hid in these bushes,” “That’s where they got my parents.” There is a reporter who has to listen to those who survived and then find the right words to tell the story of the unimaginable and at once inexpressible. No one in their right mind would want to listen to it; no normal person enjoys traumatic stories such as these, no one gets a kick out of them. Tochman is often asked about the personal toll his writing takes on him, but he considers the response neither relevant, nor particularly interesting. “I’d rather have my readers ask themselves, ‘Why am I reading about this? Why am I facing these issues?’”

Tochman showed his empathetic side in his debut collection, Staircases Don’t Burn, which also showed him to be a subtle and reserved author, one who keeps the most terrible and frightening stories to himself, not a peddler of cheap thrills and emotions. On the other hand, Tochman’s books touch to the quick, leaving the reader helpless and stifled. Maximum emotion with a minimum of words. Does The Rabid Dog leave anyone unmoved? Is reading Like Eating a Stone (a book about the Srebrenica massacre) any different from emotional rape perpetrated against the reader?

In the case of Today We’re Going to Draw Death, has Tochman not perfected the art of throwing us off guard, and most importantly, the art of leaving us completely helpless? We ask ourselves (yet again!): what can we do now, sixteen years after the genocide? What could we have done then? Are we in some way responsible for those tragic events? And if not us, then who should bear the unbearable weight of guilt, the weight of suffering?

Tochman’s books are never easy reading. Today We’re Going to Draw Death is not to be taken lightly. As the author writes at one point, “I sit and think. I’m certain never to hear about anything more cruel than this; mankind could never come up with anything more cruel. But no. What I am about to hear today is nothing compared to what I’m going to hear tomorrow. What I’m writing about now is nothing compared to what I’m going to write about later.”

If the words above were written on the back cover of the latest Stephen King novel, they might provoke excitement. Unfortunately, Today We’re Going to Draw Death is non-fiction writing that leaves us with no illusions. Yet another book to confirm the fact that man is not a beautiful creature, a book that ― for the well-being of us all ― should never have been written.

The essays’ authors not only encourage Polish filmmakers to stand at the gates and start a revolution, but also often put them against the wall with the aim of executing them