Did you know that Franz Maurer and Olo, the main characters in Pasikowski’s Pigs, are probably secret homosexuals and Silny from Polish-Russky War is a new, expanded version of Shrek? Did you, watching Karol: A Man Who Became Pope, notice how the authors sexualised Wojtyła? And, above all, do you realise that movies like Hi, Tereska or The Debt are in fact productions bogged down in the “shallows of the right-wing narrative”?

Well, if you do not, you should find useful the recently published critical history of the last twenty years of Polish cinema written by the authors and collaborators of the periodical Krytyka Polityczna. The different essays have not been written by film critics or film scholars but by authors that usually work in other fields: writers (Bożena Keff, Łukasz Orbitowski, Michał Zygmunt), literature scholars (Eliza Szybowicz, Krzysztof Tomasik, Kazimiera Szczuka), philosophers (Julian Kutyła, Paweł Mościcki), sociologists, a theologian, a political scientist, a psychologist or a visual artist. The volume’s editors, Agnieszka Wiśniewska and Piotr Marecki, do not directly tell us why they did not commission the essays with “professional” film critics but Wiśniewska gives an indirect answer in the short introduction. She says the book was conceived as a synthetic but also critical “towards the entrenched recognitions and interpretations” view on the Polish cinematography (“We reverse orders, mix sequences, decompose the picture and compose it again”), which de facto means doing away with erroneous, stereotypical and popular – according to the essay authors – opinions about movies well known to the audience (e.g. Pigs, The Debt, Day of the Wacko, Katyn or Testimony: The Untold Story of John Paul II) and therefore, it might seem, critically exhausted down to the last bit. 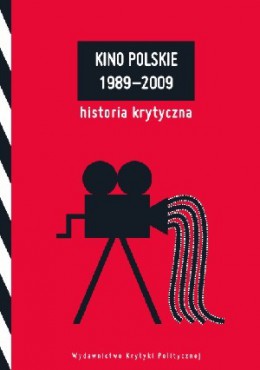 Polish Cinema 1989-2009. A Critical History,
Agnieszka Wiśniewska and Piotr Marecki
(eds.), Krytyka Polityczna Publishing,
Warsaw, 272 pages, March 2010One of the main goals set by the volume’s originators is to review and invalidate interpretational labels stuck on popular motion pictures, and the accused, of course, are professional critics guilty of simplifying meanings and promoting the “dominant ideology”. As Eliza Szybowicz writes in her review of Polish-Russky War, “The interpretational forces, of course, work in the opposite direction – mainstream reviews in paper dailies and weeklies were full of projections. Most of the notices in the culture sections are produced by the automatons of hegemonic discourses, which on this occasion can be caught in the act of appropriating a book, film, spectacle, record or painting”.

As can be easily guessed, the authors of Polish Cinema 1989-2009 decided to take those automatons apart. Their task is all the easier since they are not only polemicising with a brief, several hundred words long, review featured in a popular periodical but also do not have to worry about the “statistical” viewer/reader who – before deciding whether to go to cinema or not – hardly cares about the “Real of hyper-reality”, “Oedipal ‘diad’ or “neoconservative penal rationality”. Of course, we can regret this lack of awareness on the part of the ordinary moviegoer but it is not with him in mind that this volume has been published. It seems that the target here, besides, of course, the fans and supporters of Krytyka Polityczna, is the mainstream critic producing quick, shallow and dominant doctrine-conforming reviews and interpretations of new movie releases. The texts featured here, the inconvenient and/or surprising questions they ask, the new or seldom presented interpretations they propose should wake him up for his “ideological sleep” and cause him to next time “read” films in a less stereotypical manner, that is, to put it maliciously, more in line with Krytyka’s philosophy.

Following Artur Żmijewski’s Trembling Bodies, Paweł Mościcki’s The Politics of Theatre or the collective volume The Politics of Literature, Polish Cinema 1989-2009 is another title by Krytyka Polityczna Publishing that inscribes itself into their project of committed art/culture and, as such, appears as an obvious consequence of their activities in this field to date. Perhaps the authors had been provoked to explore the failures and the (few) successes of committed Polish cinema of the last two decades by V. I. Lenin himself, quoted by the editors in the volume’s motto (“Cinema is the most important of all the arts for us”), but I suspect that not without significance was also Łukasz Maciejewski’s conversation with Artur Żmijewski in Kwartalnik Filmowy (“Filmmakers at the Gates”) where the artist speaks of a cinematic language that “will be able to effectively criticise the reality of late capitalism and support the revolutionary longings appearing in opposition to neoliberalism”).

The essays published in the volume form a rather cohesive narrative critical towards the dominant “capitalistic-national-Catholic’ ideology (which Bożena Keff discusses in her review of Reverse). From the cinematography of the breakthrough era (early 1990s), which failed to cope with the freshly regained independence, the wild capitalism of the transformation era and the new social playing rules (vide the analyses of Three Colours: White or Szamanka), through the position of the woman in society (Pasikowski’s films, massacred by Keff, or Szczuka’s review of Plac Zbawiciela), minority rights and poverty, to more recent religious-propagandistic movies (The Primate, Testimony or the Karol diptych) and various versions of a critical interpretation of reality (Wiśniewska’s essay about 33 Scenes from Life or Szybowicz’s about Polish-Russky War). Standing in a kind of opposition to the postulate of committed cinema and the volume’s guiding idea are the texts by Piotr Marecki and Kuba Mikurda who analyse the still unappreciated works of Andrzej Barański and Grzegorz Królikiewicz: separate and “escapist”, completely incompatible with what is being talked about in the other essays, but it is really great that the volume’s editors did not ignore this kind of independent artistic statements either.

The essays’ authors not only encourage Polish filmmakers to stand at the gates and start a revolution but also often put them against the wall with the aim of executing them, which assumes the shape of trashing individual movies, reprimanding the directors for their neoliberal and conservative leanings, criticising the image of Poland, the countryside or manhood represented in their films, and, finally, of specific reactions of selected fictional characters. In several cases, these analyses are at least unfair (Keff murdering Pasikowski with the key of “political correctness” but failing to take The Cop, a completely new chapter in the filmmaker’s oeuvre, into account), sometimes banal and self-contradictory (Zbigniew Masternak’s essay on the image of the countryside in Polish cinema) or outright absurd (Stokfiszewski criticising The Debt for being right-wing and quasi-religious, or Jarosław Pietrzak who must have watched Hi, Tereska with his eyes closed, a big knife in his hand and insults on his lips, and who even suggests that Gliński has made a fascist movie), but it needs to be admitted that most of he essays featured in the volume make up for very satisfying reading. Regardless of how they exploit the films they talk about, of how the authors use them for their own purposes and how strong emotions and polemical emotions they inspire in us – or precisely because of that. A powerful volume provoking the reader to rethink and heatedly discuss not only the political and ideological aspects of cinema, the Polish film criticism and the art of interpretation/overinterpretation but also the reality of post-transformation Poland.