The man has gone, but the work remains. An uncanny body of work; at once single and singular. Despite many learned attempts at exegesis, it remains partially opaque and thought-provoking; a body of work that eludes easy classification and straightforward pigeonholing; work from another order, beside time, beside the present; anachronistic and mysterious.

An inextricable web of theology and painting, Jerzy Nowosielski’s work has been analysed in numerous ways. I don’t wish to return to these seminal works and studies, nor do I intend to hastily add yet more glosses, nor conduct an analytical splitting of hairs. I don’t want to recall facts, well-known or obscure. Commentary on the philosophy and paintings of Nowosielski has followed well-worn trajectories for some time now: Orthodox Christianity, icons, symbolism, church, liturgy, infernal order, angels, the fall, redemption…

Undoubtedly, we will soon have to pose new questions about this art and attempt to use new lexicons to describe it. Undoubtedly. But now that the Professor’s work has reached completion, I wonder how (if at all!) it will be interpreted today. What will seep into today’s one-dimensional, temporary, fleeting consciousness?

Let’s be honest: this isn’t a good time for icon-inspired painting, or for contemplating canvases that are so openly and ostentatiously religious. Had Nowosielski at least dabbled in politically involved art, feminist art, or quoted Rancière on occasion, things would be different. But there is no flirting with contemporariness, no political manifest, no help for a man downtrodden by life. All Nowosielski offers us is theurgy, magic, alchemy, subtle beings and a world hidden behind the ridge of the sky. What happened to the rawness of life? 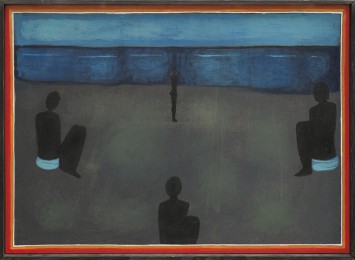 I’m looking at a reproduction of the 1983 painting Tibetan Beach. I once saw the original painting, and I couldn’t get enough of it. It depicts four brown-colored female figures, two of which, resting on white seats, flank the image on the left and right. One of the figures, cut in half by the frame, is portrayed from behind, while another stands at in profile at a distance, but her gaze falls upon the depths of the sea. The sand on this beach is alarmingly dark (as beaches in Tibet often are), while the dark blue strip of sea is topped off with lightened sky at the top. The scene is static: a calm evening, and a motionless quartet of dark, almost black figures.

I don’t know what’s really going on here, what events are taking place. I can barely sense anything. I spin a casual and quickly disintegrating narrative. I’m at a loss for words to describe what I see, and the words I do have at my disposal can’t get their story straight. I don’t exactly know what it is I’m looking at, but I know that my gaze is captivated by the dark whirlpool; a whirlpool that says something to me and about me, albeit unclearly, per speculum in aenigmate. It is a religious painting in the deepest sense of the word. But in order to grasp the adjective’s deep semantics in the slightest, we must abandon its most traditional (confessional) and one-dimensional (ideological) interpretations. “The religious meaning of things,” wrote Eduard Spranger, “is a meaning that can hide no further or deeper meaning. It is the meaning of the whole. It is the final word. But this meaning will never be understood, and the word will never be uttered. They will always remain something that surpasses us. The final meaning is a mystery that is constantly revealed, only to remain forever concealed.”

So will Nowosielki’s art — at its highest points — remain to me. It is art that touches man’s eschatological experience. It places us in a liminal situation. It reaches out to the opposite shore, with a strong conviction in the realness of that uncertain land, barely visible upon the horizon. This art shows precisely why the carnal, sensual, perceptible world is part of a reality greater and richer than its sensual manifestations. There is little we can say about it, but our intuitive sense of this state of affairs and our longing to depart from our senses are no mirages.

The work left by Jerzy Nowosielski is a true Villa dei Misteri. A house of initiation, a palace of mysteries. His paintings certainly aren’t a lesson in a dead language. Those who have been in the house, or at least stood upon its threshold, know this.