Radek Szlaga (born in 1980) – painter and installation artist, member of the Penerstwo group. Driven by the idea that painting has lost its hold on the art world, he exploits the canvas to draw out the demons of pop culture. Phased out by the allure of conceptualism and alternative media, traditional forms die out, while pop culture and its messages become the most powerful feed for our collective consciousness. 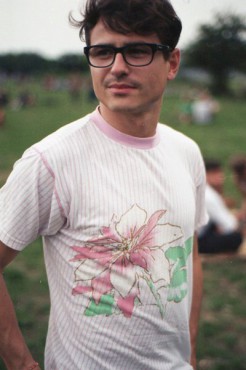 Szlaga’s skull and crossbones tribute to the masters of the genre – Kiefer, Holbein, Bacon, Rothko, Basquiat, Nikifor – looks like something you’d find spray-painted on an alley wall, using a font associated with heavy metal band Metallica. He goes further – marrying historical and religious symbols to apes, cavemen, pigs and glazed donuts in garish Technicolor compositions that can only be described as “bad art”. There are no rules, no logic in these works, only vulgarity, kitsch, political incorrectness, prejudice and violence – and yet the presentation is intriguing, familiar as it incorporates so many identifiable elements that our brains are so eager to pick up on.

And here we have it – a trash aesthetic that seems set on grating our every nerve, barreling against the very threshold of good taste. Still, Szlaga provides ample credit to the viewer, confident that he or she has the tools to look beyond the surface to absorb the message spelled out in the equation of symbols and myths. Those who don't get the irony only set themselves up for ridicule.

WHO'S WHO AND WHY?

In this section we introduce Polish artists, places, and new phenomena. We always ask the person or the place’s representative the following question: WHY ARE YOU HERE? How they answer it is completely up to them. Time for Radek Szlaga

Szlaga creates a universal folklore that goes beyond the boundaries of time, nationality, culture and intelligence. He kills our idols time and time again, in the process only proving, perhaps, that they were already dead. It is an anthropological study of today's man, caught up in a swamp of symbols that reach back to the beginnings of recorded history, an evolving reel of iconography and consumerism that rides straight through to the very dregs of our subconscious.

In his latest show, Dreams / Icons at the Arsenał Gallery in Białystok (on through 10 April), Szlaga explores his own psyche and the monsters that inhabit it. Smeared, smoky canvases are populated by troglodytes, pigs, freaks and geeks are both naive and threatening. His “anarcho-primitivism” takes recognisable symbols – a man milking a cow, a van driving down the street – and taints them with scribbles, smears and even fire. Symbols that our minds absorb and then spit back as a grotesque, barely recognisable form. These mental landscapes are a product of the post-modernist chaos of the hi-tech, globalised world. It's either that or the artist's own overactive imagination.

QUOTES:
“Painting is already such a mummified thing, in my opinion, that for the time being one must focus on its limitations.”

“My work is based on the documentation of a certain process, recording of a state of consciousness, a reflection of a mythology that I create and update continuously. It's an endemic, complex world. I'm talking about a small section of reality. And yet I describe it not by looking out the window onto the playing field, I'm talking about a reality perceived through the prism of culture, its bits and pieces, both the high and the pop, drawn from literature, films, music and even art itself in all its manifestations. Cultural models traveling from distant cities to the periphery often end up slightly drab, deformed, wrinkled. As they make their way from the source to my studio they curve or flatten, they are imperfect, crippled, weak. And here they are subjected to a process. It is a process of degradation, simultaneously a source of inspiration and the subject of my work.”

“That ‘discreet charm of imperfection’ is exceptionally alluring for me. I aim to make errors, remnants and failures the heroes of my paintings in the nearest future.”

“There are individuals who prove in their art that it's worth believing that painting as a medium, in spite of the barriers of two dimensions – in other words a certain handicap in comparison with other, newer media – can still keep up. There's no other power than that of the vast union of television audiences or pop music fans, but because of this (painting) is freed of the rules that govern showbiz. This is its strength – its freedom and a certain elitism.”

“My interviews are no longer valid after a month.”

WHY ARE YOU HERE?
My dreams have always driven me towards auto-expression and its promise of splendour. I once hoped to become a rock star like Axel Rose, later a film director, but in the first instance I was terrified by the idea of standing up in front of hundreds of people – completely unnatural for me. In the second instance, it was all those names in the credits. A disdain for compromise and for sharing responsibility in the creative process pushed me to work on my own, leading me to where I am now – a painter.