This home wasn’t built according to an approved plan, but the constructors thought of everything. First of all: the environment. The home was built out of 100% post-consumer waste. Local dumpsters were a copious source of construction material, offering kitchen cupboards (repainted), wooden blinds, cardboard, stripped linoleum flooring, plastic crates, and sheets of styrofoam. The furnishings were procured in a similar fashion and consisted of blankets, duvets, and pillows discarded by others. To decrease energy consumption, a diverse selection of insulation material was used, from styrofoam to old carpeting. Practical concerns were addressed as well, with common areas alongside modest private spaces. The home has cozy, miniature bedrooms and sunny terraces. The entrances are accessible to the handicapped. New improvements are constantly being added; the building is a “work in progress”. The entire property is fenced off, but not guarded, and access is not restricted. Food is catered. The home is located 5 minutes from the Marymont subway station, next to a guarded parking lot, between a newspaper stand, a vegetable shop, a deli, and a hair salon. There is a veterinarian nearby; a definite plus, considering the home is built for stray cats. 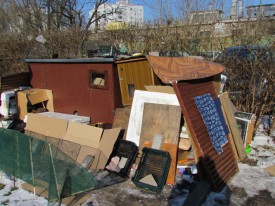 archives of Maria PoprzęckaNo-name architecture — meager and insignificant yet ingenious buildings made from just about anything and by just about anyone — first became a subject of interest in the 1960s. In 1964, New York’s Museum of Modern Art hosted a famous exhibition by Bernard Rudofsky, “Architecture Without Architects: A Short Introduction to Non-pedigreed Architecture”, which presented a variety of non-professional techniques of constructing shelters and dwellings. Built from the detritus of civilization — used shipping containers, old camping trailers, tires, boxes, and packaging — the abodes were firmly rooted in the ideology and style of hippy communes and the myth of the American road.

Architectural counterculture is by no means on the way out. Like most counterculture, it is undergoing institutionalization and employing new media. Among the themes at the recent Architecture Biennale in Venice were habitats designed by architects and artists, including houses for the homeless made of recycled materials, such as capsules built out of refrigerators, complete with bedding for their inhabitants. Virtual habitats are being created as well, such as the ones designed in Photoshop by David Trautrimas, built from recycled material but resembling an architectural whim rather than an inhabitable shelter. 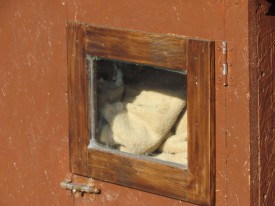 archives of Maria PoprzęckaYou could say that the stray cat shelter (by no means the only one in Warsaw) is located in what Pascal Nicolas-Le Strat describes as “the crevices of big cities”: “Crevices are what is left of resistance in big cities — resistance against normativeness and control, homogenization and appropriation (…) crevices open the space of freedom, weakening the limits imposed by the system.” It would of course be ridiculous to inscribe feline habitats into the critical urban discourse as “a space of resistance against official urban life and the rigid urban structure.” Probably because cats usually seek refuge in places that lack any clear architecture and urban structure. They are always “in between” — squeezed between kiosks, parking lots, and fences, in places marked with the temporariness that is characteristic of Warsaw’s urban tissue. But there would be no place for them in a gated community and its system of restrictions. Their role in such a place would be to fight the system.

Paradoxically, the habitat itself, constructed out of used, degraded, and destroyed material salvaged from the junk heap, is not an example of degradation. Conversely, it is directed against entropy, destruction, and collapse at the lowest level possible. Not just because everything that is temporary and makeshift in Warsaw acquires permanent qualities. Through arduous and disorderly accumulation, this modest urban architectural form reveals an attempt to give form to the shapeless, usefulness to the useless, and new meaning to that which has been stripped of all meaning.

The elderly women who build the shelter continue to look after and augment it, oblivious to all of the above. “You want to have fun, but we want to exist,” they might say, were they to recall Krasicki’s fables from their school years. All they know is that the bowls need refilling every day, and the milk must be served warm — the nights can be chilly.

The author wishes to thank Professor Marta Leśniakowska for her consultation on this article.