The ominous roar of rushing water greets you at the doors of the western wing of the Four Domes Pavilion. The liquid pours into a metal reservoir that occupies much of the space inside. The thick, polluted water is circulated through a closed loop, pumping out of the reservoir only to pour back in a moment later.

The installation Wege zur Behandlung von Schmerzen by Mirosław Bałka was one of the projects presented as a part of the Trickster 2011 series at the European Culture Congress in Wrocław. The titular trickster, a character that appears in myths and folklore, is a kind of playful spirit that rebels against conventional norms. The series, which featured contemporary art alongside theatrical productions, was one of the most interesting projects presented at the ECC. While Trickster 2011 could have ended up as just another side show tacked onto the program of the congress, it turned out to be an event of great critical potential. 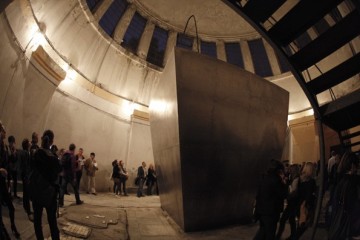 Bałka’s piece, which some described as an “anti-fountain” and others as a “poisoned well”, has a sensual effect. The roar of the water evokes a feeling of unease, reminding you of your childhood and your fears of stormy, muddy water, or of falling into a well and drowning. The artists also makes references to collective memory as well as the historical memory tied to the location itself. The ominous circulation of polluted liquid expresses our inability to forget. Water plays certain roles in culture and tradition. It can be a gate leading to the afterlife. It is a symbol of cleansing, but it also represents doom and destruction. In the Romantic tradition, water is associated with mystery and an unfathomable abyss; within it lie temptation and evil. The pouring water is reminiscent of films by Andrei Tarkovsky, where dripping water ticks away the time and is yet another element of the melancholy landscape. Poisoning wells was once a military tactic used against enemies. In the Jacek Kaczmarski song Zatruta studnia (The Poisoned Well, 1980), drinking water from a poisoned well leads to insanity.

Bałka’s piece is the fruit of “the experience of pain”. The artist was struck by the contrast between the historic wings of the building and its contemporary extensions, like the monumental, electronically controlled fountain. Bałka focuses on the relationship we enjoy with memory, on how public spaces are shaped nowadays: as places of tension and exclusion, rather than genuine celebration.

The Four Domes Pavilion is currently in a state of complete disrepair. Future plans for the building include its use as a venue for contemporary art. The pavilion, with its grimy walls and streaked windows, bears the signs of a rich history. It was built the fairgrounds located on the east side of Wrocław according to plans created by the German architect Hans Poelzig at the turn of the 20th century. The pavilion is located near the People’s Hall, not far from the picturesque Pergola and Japanese Garden. It is said that the faded remains of swastikas can still be seen on the walls of the People’s Hall. In 1948, following World War II, the building was used as a venue for a series of propaganda events and exhibitions collectively known as the Regained Territories Exhibition. The Four Domes Pavilion opened with the so-called Vestibule of Victory. Opposite the entrance, enormous Grunwald Swords were arranged, while the broken and rusted remains of German weapons and military banners were placed on the ground.

The functions served by the building complex in the past evoke critical reflection on the place’s modern-day role. How do contemporary narratives differ from those of the past? The title Wege zur Behandlung von Schmerzen is German for “Ways to Treat Pain”. As the artist himself emphasises, in order to treat pain, one must first be able to perceive it.