After all, it seldom happens for selected stories from an author’s two relatively recently published non-fiction collections (Schodów się nie pali [You Don’t Burn the Stairs], the 2000 debut, already reissued in 2006, and Wściekły pies [Mad Dog] from three years ago) to be published in a separate volume. Wydawnictwo Czarne decided to go through with the ‘experiment’ and in effect, although we receive stories we already know, they seem even more powerful now, even more moving. Writing about Tochman’s fiction, one can hardly avoid big words and emotional epithets. Thus we say these ‘powerful’ and ‘moving’ texts, but also ‘shocking,’ ‘extreme’ or ‘painful.’ Tochman himself doesn’t use such expressions, yet he tells stories that are really hard to believe sometimes. 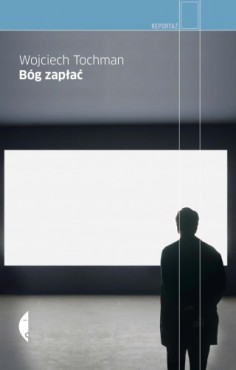 Wojciech Tochman, Bóg zapłać,
Czarne Publishing House, Wołowiec 2010The tragedy, described in Mojżeszowy krzak (The Moses Bush), of a group of secondary school graduates going on a pilgrimage to Częstochowa (following a collision with a lorry, a fire breaks out in the bus and nine students, the driver, his substitute and the lorry driver are killed) and the tragedy of their parents (in Amen, Tochman writes about their suffering but also their passion to expose and accuse, their obsessive search for those responsible for the tragedy and their desire to bring them to justice). The tragedy of a single woman molested in her childhood by a priest and today, after the truth has come to light, hated by the vast majority of her community (Atmosfera miłości [Atmosphere of Love]) and the tragedy of another woman, also left to her own fate, disabled, raising five children, haunted and oppressed by her husband obsessed by a sick belief in God (Bóg zapłać [God Bless You], the title both of the collection and of the only previously unpublished story in it). The tragedy of a ‘man who has risen from the [railway] tracks’ without any memory of his past, the tragedy of Maria Rutkiewicz who has waited and believed for years that her daughter, the mountain climber Wanda Rutkiewicz, didn’t die during her last expedition (Siedem razy siedem [Seven Times Seven]), the tragedy of a young HIV-carrying homosexual priest who loves Jesus Christ ‘like his mom and dad’ (Wściekły pies). Stories full of tragedy, pain, suffering, trauma, failure and loneliness. And yet – although this is really hard to believe – these are stories about faith: in God, in a fellow human being, in elementary justice, in truth, in that life makes (must make, should make) sense after all. Stories about searching and a need for faith, about strong faith and imaginary faith, about healing and joyful faith but also a sick, perverted and virtually pathological one, faith full of internal contradictions but also consistent and cohesive (at least in the believer’s own opinion).

I can’t find words high enough to praise Wojciech Tochman’s reporting skills, his overawing empathy, his ability to talk with clarity about the most difficult issues. The author of Wściekły pies never forgets who really matters in non-fiction writing and doesn’t entertain the reader with self-referential digressions about his adventures as a reporter or difficulties finding the right word.

It’s a cliché to say that Tochman’s non-fiction is also belles-lettres literature. Yet I must use this cliché here, encouraged by the stylistic clarity or the construction of the texts collected in Bóg zapłać as well as the following – sure, quite crazy with regard to non-fiction writing – thought: ‘if these stories weren’t true, would they defend themselves as fiction?’ The answer to this – again, not very reasonable – question is affirmative. Reading Schodów się nie pali, I was thinking of Doris Lessing’s The Fifth Child, my rereading of Człowiek, który powstał z torów [The Man Who Has Risen from the Tracks] reminded me of Tadeusz Konwicki’s Ascension into Heaven, and the dense, full of venom, hatred and insults, Atmosfera miłości brought to mind the prose of Elfriede Jelinek. All these literary associations confirm my belief about how mature and well-written this non-fiction actually is.

The essays’ authors not only encourage Polish filmmakers to stand at the gates and start a revolution, but also often put them against the wall with the aim of executing them