Art becoming a target of a political interpellation is a rather unique situation, and this is what happened in case of the this exhibition. I say: great! Since homosexual exclusion is present in Poland in every aspect of our public life: on the street, at home, workplace, and in the museum, the modern temple (for those who don’t believe in art itself), not to mention the real sanctuaries. 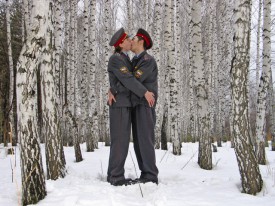 Blue Noses, Kissing policemen (An epoch of
clemency), 2005; photography;
courtesy of the artist and M&J Guelman GalleryThe Ars Homo Erotica exhibition was put together by the new director of the National Museum in Warsaw, Piotr Piotrowski, and the curator invited by him, Paweł Leszkowicz, who is openly gay. Some will be shocked, especially the hetero-normative, others — the homo-orientated — will be disappointed, and inquisitive souls will remain unsatisfied.

One swallow doesn’t make a summer, but it is a good start. Hopefully it won’t be like in Chekhov, where the wise man already knows, and the thick one isn’t even curious. The exhibition is at the same time a manifesto of the new management, taking all the excluded, omitted, hidden and forgotten and restoring its position in the art world. The first and most obvious association was the homoerotic art, nearly omnipresent in the past, present and everyday life of the high arts, yet absent in people’s minds, eyes, or just labelled differently.

Stanisław Pięta, member of the parliament on behalf of the Law and Justice party, criticised the exhibition in a letter to the Minister of Culture and the National Heritage. In the letter he compared homosexuality to necrophilia and pedophilia and also called on priests from Wrocław, the Minister’s home city, to express their disapproval of the exhibition during Sunday masses.

It’s no eye opener to say that European art was always a vent for homoerotic emotions. At some stage art didn’t have to vent anything, because ancient Greece and Rome did not condemn homoerotic relations, but were rather permissive towards them. It was Christianity that redefined the whole erotica, including the homosexual one, as a sin, taboo, curse, shoving it into the dark side. Homoeroticism became the biggest taboo of all. And to think that tribal art, nowadays referred to as primitive art, presents homoerotic scenes; the issue concerned cave people, too. The so called third gender was, and often still is amongst the tribal people, a respected alternative to the male and female world.

Homosexual emotions are one of the most powerful drives in the art world. It’s obvious. It shows.

The main character in Leszkowicz’s exhibit is ...democracy. The curator recalled the story of the ancient democracy of Athens initiated by the homoerotic story of two Athenian lovers Harmodius and Aristogeiton. As 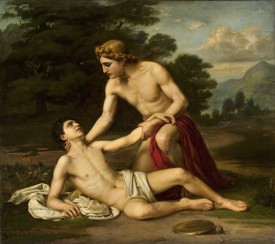 Alexander Kiselev, Hyacinthus' Death, copy,
2nd half of 19th cent.; oil on canvas;
150x115 cm; National Museum in Warsaw
Leszkowicz puts it: “In 514 AD Harmodius and Aristogeiton decided to resist the tyrant leader of the times. Hipparchus was going to separate two lovers to take one, Harmodius, to himself. The couple opposed and carried on a successful coup d'état. The revolutionaries were captured, though, and died as martyrs. Their sacrifice began a revolution.” A bronze statue from 477 AD that commemorates the events hasn’t lasted, but is well known thanks to its many copies. One of the duplicates belongs to the National Museum (seated in the Old Orangery located in the Royal Baths Park [Łazienki Królewskie] in Warsaw), but somehow didn’t make it to the exhibition. Nevertheless, it is the lovers who welcome us from the imposing banner hung in the Museum’s vestibule. Harmodius and Aristogeiton were made patrons of the whole exposition, reminding us that somewhere in the beginning of European civilisation, homoeroticism and democracy were in proximity. Such is the anecdotal commencement of Athenian democracy which we like to relate to today, and of which we are the supposed followers.

In 1994, the same rooms of the museum hosted the Ars Erotica exhibition prepared by curators Elżbieta Dzikowska and Wiesława Wierzchowska. Inevitably, the present exhibition refers to the previous one, which back then was supposed to disenchant gloomy and rough years of communism, demonstrating joy and vitality. Not everything went right, but eroticism was “bookmarked” as an important element of any art.

Ars Homo Erotica comes with a quite obvious, commonly known and not strikingly new statement: homoerotic art exists, as do homosexuals. 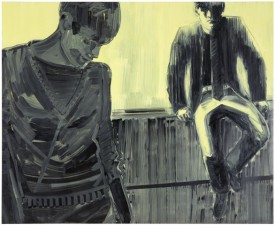 Adam Adach, For Such Thing As Love, 2009;
oil on canvas; 140x170 cm; courtesy Galerie
nächst St. Stephan Rosemarie Schwarzwälder,
Vienna; photo Markus WörgötterThe exhibition was done in a rush. Based practically completely on the Warsaw Museum collection, which is highly insufficient to properly show homoerotic themes in art. Many issues have been omitted. What’s more, the exhibition maintains a strongly Polish character stemming from our experience, our art resources. The curators barely venture beyond our borders. Such was the aim, but it is nevertheless a shame.

A few facts. The exhibition was divided into sections according to merit: some are more general (The struggle, Homoerotic classicism), other more particular, iconographic (Ganymede, Saint Sebastian). They were supplied with the Warsaw Museum’s collection and with newer works, created in recent years, as well as pieces prepared especially for the occasion. As it usually happens with acts of manifestation, which is what the organisers of Ars Homo Erotica aimed at, the quality of artwork varies considerably, either artistically or technically. Since the exhibition itself seems to be a transgression, the efforts to be correct within that context is another problematic aspect here. If someone is gay it’s his or her business; it's nobody’s concern but their own, and there’s nothing to come out and brag about. That’s exactly what previous generations of Polish gays used to think. It’s changing now, and the Warsaw exhibition is the best example of the process. There is no transgression nor excess. Surely for a common visitor of the Museum’s space the over-presence of male genitalia, even if idle, might be enough. Needless to say that female genitalia were exposed with a lot of boldness in few cases. And while we’re at it, there’s just few works of a lesbian provenience, but asking about the gender parity index would just be nasty. 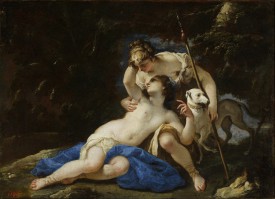 Federico Cervelli (?), Diana and Callisto,
2nd half of 17th cent.; oil on canvas;
49x64,5 cm; National Museum in Warsaw
There’s one principal question which cannot be avoided: when does a simple male art nude become homoerotic? It’s not putting too fine a point on it, but just asking about the nature of interpretation: is it justified or is it a usurpation? Male nudes were once one of the obligatory basics in the art academies. How about Anna Bilińska, the painter, author of intriguing studies of male bodies? Or Jan Matejko for that matter, the author of two pencil artworks of nudes shown at the exhibition? It’s hard to suspect them of being homoerotic.

On the other hand: not every unknown portrait of two anonymous girls from the 19th century is an image of two lesbians. They might have been cousins, sisters, or perhaps lovers. Still we don’t know that, so we might be dealing with misinterpretation or usurpation. Indeed, Marcel Duchamp would be right in saying that beauty is in the eye of the beholder. Leszkowicz’s vision seems slightly impaired. One-track mindedness is arbitrary, and unjustified.

Putting on show all the Saint Sebastains that belong to the Museum wouldn’t be arbitrary. 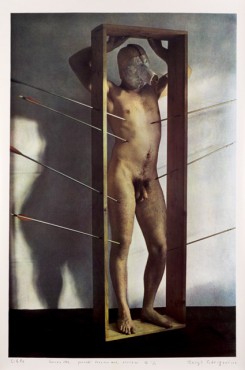 Stasys Eidrigevicius, Arrows, 2003;
photography from the Fresson series;
private collectionThe room dedicated to this very figure is without a doubt most apt. Francesco Guarino’s early  17th century painting is a true masterpiece, where one wonders which element is more impressive: the martyr’s body or the grey and white cloth covering his organs. It’s one of the most beautiful paintings in the Museum’s collection. The room also contains what is probably the strongest contemporary instance of the theme: the video piece by Karol Radziszewski. Sebastian is a present day man, and the soldiers tormenting him are wearing white and red badges on their arms. It’s an important comment on us, the Poles, a lot of whom do not tolerate the otherness. This is Poland – one of the first countries to guarantee minority rights; a country with a complete lack of tolerance on the street.

If I were malicious, I would review the exhibition with the following words: the outcome doesn’t matter, it’s important that it’s there at all. Not everything went right, but it would be a sign of narrow-mindedness to raise trivial objections. Nevertheless, I cannot but point out areas where common sense, verifiable historical, or art facts were disregarded. All of these occurred in case of the exhibition. Completely unnecessarily.