A tall, slender figure, dressed in a tight-fitting black lace costume covering the legs and torso like a body painting, enters a huge, almost empty stage. The space itself appears familiar – alluding to Krzysztof Warlikowski’s previous shows, it automatically evokes them – but it is also particularly alien, distant and distancing that which will soon start taking place on it, which will be taken up as a subject within it: the end, approaching it. Is it because the end is always a distancing factor despite the sense that we are approaching it? That it is impossible to arrive at it, or transgress it? That it will always be a bit farther, not here, where the narrative about it can reach? A sense of the end is by no means identical with the end itself and says nothing definite about it. What matters is approaching it, covering the impossible distance that seems to ultimately separate the ‘self’ from itself. Does the end mean a promise of fulfilment? Or is it just its illusion, a delusive prospect of understanding, in reality catching the subject in a trap of eternal expectation?

In Krzysztof Warlikowski’s most recent show, these questions are combined with questions about guilt, which, like the sacrifice in Apollonia, becomes the central issue. A sense of guilt, of undeserved guilt in particular, is inextricably connected with a sense of the end, entangling the subject in a game with itself, separating it from itself. This entanglement means that the end appears not so much as a promise or illusion of fulfilment as much as an effect of unfulfilment. So is guilt a kind of unfulfilment? An unfulfilment of a desire that can never be fully satisfied? Apart from being, sometimes at least, an unfulfilment of an interiorised sense of duty or self-imposed vocation. Or a rejection of something that awaited fulfillment. As such, guilt is immanent. 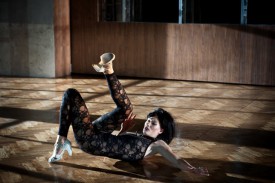 photo: Magda HueckelThe black lace-clad figure, whose face is covered by long black hair, begins her dance in the empty space. She sweeps it up, brings it closer, marking it with the signs of an initially incomprehensible but distinct alphabet. The litheness, the virtually animal fluidity of movement means that the dancing figure eludes strict categorisations. She seems to exist beyond gender and beyond age – like a hermaphrodite, like a deity. Her name is Babylon. When she stops dancing, she puts on a long, greyish-back coat that almost completely covers her beautiful body. She shrinks, contracts, looking like a hunted animal. Magdalena Popławska perfectly expresses the figure’s ambivalence and strange duality.

Babylon is a dancer from Bernard-Marie Koltés’s unproduced screenplay titled Nickel Stuff. Babylon wins a dance contest at Nickel Bar where for two years Tony Allen (Jacek Poniedziałek) reigned supreme, but he does not feel the sweet taste of victory, a sense of fulfilment not being given to him. Before exiting the stage, he hears Tony’s caustic remark, “Quite good but he has no legs.” The words, seemingly insignificant in the face of victory, somehow stigmatise Babylon with an inalienable, impossible to overcome sense of deficiency, emptiness, and impossibility. Babylon – the city of blooming gardens, the “gate of heaven” –  contains Nothing while, at the same time, becoming a foretaste of hell in which unfulfilment is the sin. 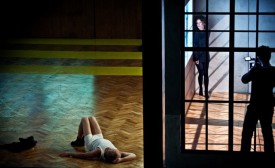 photo: Magda HueckelIt is in front of this gate, whether metaphorical or literary – the gate of law, the gate of death, a gate at which we arrive led by a perhaps unconscious sense of guilt, a vague fear – that all the protagonists of The End stand: Joseph K. (or, actually, Joseph and K.) and the Hunter Gracchus from Franz Kafka’s stories, Tony Allen from Koltés’s Nickel Stuff, Elizabeth Costello from J. M. Coetzee’s novel. The gate appears as an end from which one cannot turn back and, at the same time, as an obstacle that cannot be overcome. You cannot simply pass through it but, at the same time, you can only pass through this particular gate, different for every one – like in the parable in Kafka’s Trial – in front of which you are put by your own life, work, your own guilt or alleged innocence. For this reason, the characters in The End remain in a strange state of suspension, in an ambivalent space right in front of a threshold – a threshold that it is both impossible and necessary to pass. At the same time, each of them faces in this sphere of ambiguity the necessity to square accounts with themselves, while being internally divided.

The impossible gate through which one cannot pass without paying a price turns out to be an inner thing, something that separates the “self” from itself. It is the homosexual identity that Tony discovers and his characteristic swinging between tenderness, aggression, and aversion in his relations with women (great scenes with Tony’s mother, played by Stanisława Celińska, providing flashbacks to similar scenes from Hamlet and, most importantly, Krum). It is a deepening chasm between a sense of innocence and hidden layers of guilt, expressed in Józef K.’s (Maciej Stuhr) schizophrenic monologue on the hospital bed. It is, finally, the impossibility of a purely intellectual reconciliation or alignment of the strive towards objectivism with the individual and personal and, in the case of Elizabeth Costello (a superb performance by Ewa Dałkowska), with questions about faith, the latter being something else and something more than just a sum total of one’s views and opinions. 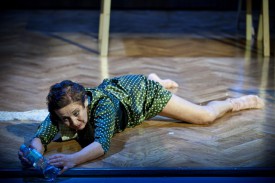 photo: Magda HueckelWarlikowski’s The End, which, like (A)pollonia, is a montage of texts, turns out to be another story about identity: identity that is divided, subjectivity that is fractured and marked by a vague sense of guilt. This time the director draws clearly and directly from his own anxieties, obsessions, fears, processing them into a four-and-a-half-hour long spectacle that unfolds at a rhythm that is slow and wearisome but also seductive and engrossing like a dream, fascinating and nightmarish at the same time. He quotes questions that have already been voiced in his shows and raises them as his own. He offers no answer. He searches for it by multiplying questions – in repetitions, loops, wanderings. Does he reveal any mystery? No – as one of the figures, a speaker, judge, guide, carrier (and none of them), played by Marek Kalita, says – mystery is not something that can be revealed. You can wander around labyrinths and find nothing because there is nothing to discover. Mystery is always here – right on the surface. Underneath, on the other side, inside, “there is nothing like that,” as Elizabeth Costello says after she has succeeded in looking behind the gate.

Or there is precisely only Nothing – an illusion of returning to the state of innocence and wholeness. In Warlikowski’s show, the mystery is in the disintegration of subjectivity, the non-identity experienced nowhere else but in front of the gate. 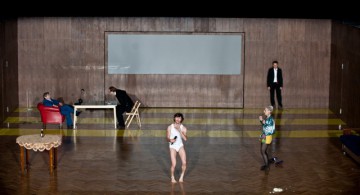