Gerda Taro. Robert Capa. Two non-existent people. Two non-existent photographers. But exist they did: their true names were Gerta Pohorylle and Andre Friedmann. He became famous as Robert Capa – war photographer, one of the best the world has ever seen. She became famous...for what? At first for being Friedmann’s lover. Then, somewhat later, as a war photographer in her own right except that she was killed in action shortly before her 27th birthday during the Spanish Civil War. She had never intended to be a photographer. She caught that bug from the young Hungarian Jew, Andre Friedmann whom she met in Paris during the 30’s. He had escaped from Budapest, while she had escaped to Paris from Germany, where, as a young Polish/German Jew, she got into serious trouble distributing anti-fascist leaflets.

Both Taro and Capa are the subject of an intriguing book, Waiting for Robert Capa (Czekając na Roberta Capę) by the Spanish writer Susana Fortes.

Gerta and Andre were refugees in Paris; as such, they had to put up with all the negative meanings of the word. Foreign, poor, young, thirsty for life, but with the ugly face of fascism steadily growing across the border in Germany. Paris was full of such refugees, mingling fascist supporters with socialists and communists, crowding the cafes where endless discussions and arguments took place late into the night – every night.

What a wonderful backdrop for a love affair! An earnest, but struggling young photographer who realises he is a nobody when his photographs are published – but without his name next to them. She, proud, attractive - but with the stigma of a refugee, takes on odd jobs and then lands work in a photo agency as a seller. Hence the clever idea of inventing a supposedly rich, famous American photographer called Robert Capa. She, selling his work could negotiate much higher rates than normal by arguing that Capa, being so rich and famous, would be insulted by standard rates. In this way, Robert Capa, ace photographer was born. Born too was Gerda Taro, as Gerta Pohorylle had always been a fan of actress Greta Garbo. A clever ruse that was believed for a while, but by the time publishers found out, Friedmann/Capa had indeed started producing first class work.

United in part by their hatred of fascism, they both went to Spain at the start of the Civil War in 1936, where they were slowly but steadily sucked into the whirlwind of war and war photography. This is where Robert Capa shot his most famous photograph – if not the most famous war photograph of all time, of the Spanish soldier falling at the moment of his death. This was where Gerda started defining herself as a photographer, not just as a war photographer. Her style was being formed by the extreme – but also normal – moments and events she witnessed and that were to shape her short life. Yet the more she became a photographer, the more she moved away from Capa, even resisting his offer of marriage. Theirs was, in the end, a tragic love affair. In Gerda, Capa had found his one and only true love; in Capa, she had found love too, but more so a sense of purpose and direction in her life – cut short when a Republican tank sideswiped her while she was perched on the running board of a car carrying wounded soldiers after the battle of Brunete.

Somebody rather cheekily called her “The Blonde of Brunete”, but the title belittles her. She was, after all, the first woman war photographer and as such, the first to die in battle. We should know more about her, but she always lived in the shadow of the great Capa. This book does a superior job in bringing her back to life – helped, in no small part, by the sensational find of the “Mexican Suitcase” several years ago. The “suitcase” was actually a few cardboard boxes found, by chance, in Mexico for some difficult to explain reason. Inside: neatly rolled up, thousands of previously unknown negatives – mainly of the Spanish Civil War – shot by Capa himself, by another great photographer, David “Chim” Seymour (a Polish Jew from Warsaw) – and by Gerda Taro. Now, after several years of painstaking work preserving, scanning and cataloguing these negatives, we have a greater perception of the work of this bright star in the history of photography. 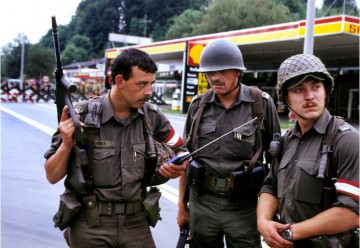 Not being a war photographer as such, I am proud to say that this is a war photograph. Not that these guys are fighting anybody – they are Austrian soldiers on alert on their border (at Spielfeld) with Slovenia. They look worried, and rightly so. Fighting is indeed going on, but on the other side of the border – it's the Slovenians fighting the Serbs. It is summer 1991, and the first shots of the brutal Balkan War that is about to start have been recently fired. Luckily, I photographed this scene on the last day of the Slovenian-Serbian war, won by the Slovenians. They could keep the independence they had only recently gained. A couple of hundred yards away the antagonists are still happily firing potshots at each other, hence the worried look on the faces of these Austrian soldiers.

The 63 days in question is the time it took for the Warsaw Uprising to start and stop. The year it started was 1944

3D has been around now for almost a hundred and sixty years. Introduced to the public at London’s 1851 World Exhibition, Queen Victoria loved it