The eye of the camera observes young men as they scale a scaffolding. Their tanned skin glistens in the sun, sweating profusely. The workers/painters don’t realize that they are being watched… The film, screened at the entrance to the Karol Radziszewski exhibition, foreshadows the nature of the entire show. The main role is played by gaze itself, entwined in a network of relations and dependence. Dissected, deconstructed, and classified, the entire presentation is transformed into a room of funhouse mirrors. Its complicated system of internal reflections allows the viewer to revel in the ecstasy that has been stripped away from the “normal” world. It gives us an opportunity to align ourselves with a tender, homosexual gaze (filtered through the camera lens), directed at a heterosexual body. The exhibition itself is a photographic and cinematic counterpart to the pink tape on the walls at the artist’s Zachęta show, titled Siusiu w Torcik (To Pee in a Bun). Furthermore, he poses questions about the presence of the male body in the public sphere and the uninhibited affirmation of the (homo)erotic gaze. 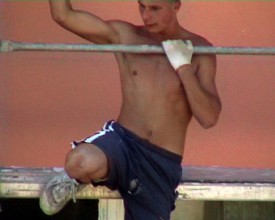 Karol Radziszewski, Painters, 2007Backstage displays a multi-layered structure. It includes work such as: Study, images from the Studio series, stills from the film Sebastian, a recording of the casting for Backstage, Study for a Wounded Insurgent, and a recording of the video-performance Ready 2 Die. The titles themselves suggest that the work remains suspended in its early stages, in a random and casual form. As if meticulous preparations were under way for some potential work of art that is not on display. Radziszewski goes behind the scenes, showing us the dirty, greasy workings of the observation machine as elements through which power is exerted. He reveals to the viewer that which is rejected, suppressed, and hidden. But is the titular measure of taking us backstage anything more than an alibi, an excuse to show us bodies? In this context, Backstage is a pretext to wrap the body in art; an art laboratory in which the unsteerable law of desire is researched; it is a game whose rules have been clearly set out by the history of art, where the mythological or literary costume was notoriously employed to protect the artist, sponsor, or owner from accusations of sin or lewdness. 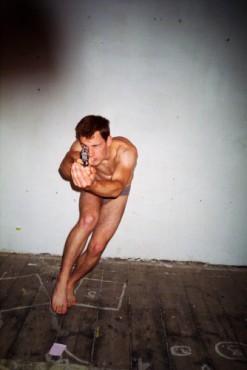 Karol Radziszewski,
Janek from the Studio cycle, 2007As Maria Poprzęcka writes: “Of all the senses, sight has the greatest power to lead us to sin. Of all the body’s organs — whether in the Bible, or in its everyday translations — none have been as praised and condemned as the eye […] Of all our sensory organs, none have been subjected to such restrictions and control as the eye. The long and complex history of the eye’s sins are thus a story of prevention, rather than transgression.” Artworks about looking have always been troublesome. In a portrait by Manet, the Parisian prostitute Olympia challenges the confidence of the viewer by brazenly returning the gaze, as if to ask: “What are you looking at?” There appears to be no defiance in the gaze of Radziszewski’s models. There is anticipation and submissiveness. The models, obedient to the artist’s subtle requests, disrobe, pose, and look bored. They are a bit tense, somewhat troubled. They look down. The active one is the one we don’t see.

The tensed body of the martyr, suspended halfway between suffering and ecstasy, soon came to symbolize alternative forms of desire. Numerous representations of the martyr contemplated his immobile body, pierced with arrows. Radziszewski’s modern take on the saint is realistic, raw, devoid of camp tropes. More time is devoted to St. Sebastian’s murderers, the violent young soldiers. Radziszewski thus emphasizes the sadomasochistic ritual that is usually omitted in homoerotic representations of the saint. 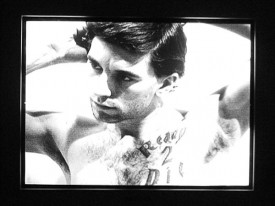 The artist himself can be seen on stills taken on set. He touches up the makeup on the faces of the solders and smears blood on the victim. These pieces reveal another of the exhibition’s motifs: a realization of the fantasy about the studio as a place marked by a phantasmatic creator, a space splattered with blood, turpentine, and semen. The workshop, where ideas and experiments with unshaped matter are born, strikes one as a privileged, inaccessible space — Bluebeard’s room. Radziszewski takes us behind the scenes of his art, as if to show us all the work behind the command “Take your clothes off,” spinning a tale about the man of his dreams. He suspends time when the characters in his films stretch their limbs, shave off their hair, remove their shirts, and unzip their pants. He protracts this moment, allowing it to replay ad infinitum on a looped projection. Subsequent films serve to prolong the gratification demanded by the unsatiated gaze. They are a Proustian ritual of seeing in slow-motion. As with Warhol’s eight hour film Sleep, there is a certain tension to these observations of passive models, although nothing (or almost nothing) actually happens. They simply give us the pleasure of admiring them. As Katarzyna Kozyra would put it, Radziszewski’s art makes dreams become reality.