Constance is inherent in the fruit of conceptual strategies that involve the quotidian documentation of reality. Whatever minor changes occur are predictable, take place gradually, between subsequent snaps of the shutter of the camera, and are immediately classified and subject to analysis. While staying true to this formula, Cecylia Malik evoked lively reactions from passers-by with her hyperactive behaviour in a recent project, which involved climbing trees every day for 365 days. Neither technical challenges nor changes in season or weather proved to be a sufficient deterrent. As the pictures show, some of her ascents were low, just high enough to make them count. Other times, Malik assumes contorted poses among the boughs, letting the trees embrace her and take her as their own, sucking her into a convoluted system of narrow and twisting bridges, knots, and grooves in the bark of more or less climber-friendly species. 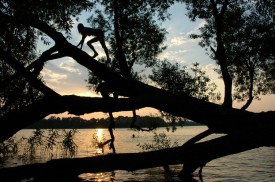 Cecylia Malik, 365 trees, a series of
performaces and photo album
Fundacja Nowej Kultury Bęc Zmiana,
Warsaw 2011Most of the photographs depict her in victorious poses. She surveys the area like a brave seaman perched atop a ship’s mast, scanning the horizon for land. Her dexterous movements resemble those of a forest animal, which, even when standing still, looks as if it were about to tear off into the woods and disappear. Regardless of her choice of pose, she has to climb the tree every day, overcoming the torpor of her own body, relying on nothing but her muscles and her sense of balance; grabbing the lowest branch and pulling her weight up. She always carries a camera, a set of colorful pantyhose, and a pair of thin-soled flats that help her brace herself against the bark. Thus equipped, Malik can become a delicious object of visual consumption in the space of a few minutes, making herself visible among the leaves, acting out her femininity, and communicating her non-threatening attitude despite her prime position for launching an aerial attack. 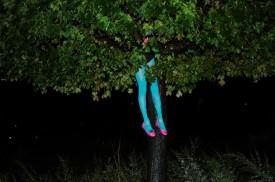 A performance demands courage, a departure from the beaten path, a good yet simple idea, like the joyful defenestration of old furniture onto the street, as the Malik sisters did in “Smoleńsk 22/8”, when their parents were moving out of the apartment in which the girls had spent their entire childhood. For Cecylia Malik, this strong, physical bond with a place and its conscious abandonment began earlier with a series of realistic paintings depicting sewer drains, gates, gas meter covers, rusting commercial signs, and peeling walls. Attached was a map of their locations, enabling viewers to recreate the artist’s daily route, chopping the city up into priceless, familiar snippets. Her yearlong arboreal project is an analogous attempt to exert temporary control over an area.

Malik’s decision to embark on the project was influenced by Italo Calvino’s novel The Baron in the Trees, in which a 12 year old Cosimo, following an argument with his father that ends in him saying “no, no, no”, decides to climb a tree and never descend again. He spends the rest of his life in the dense canopy, leaping among the crowns of trees. He reorganises his former reality into a new one, built in a suspended asylum of rustling and murmurs. The brother of the tree-climbing baron describes the boy’s adventures thusly: “While down below our world lay flattened, and our bodies looked quite disproportionate and we certainly understood nothing of what he knew up there — he who spent his nights listening to the sap running through its cells; the circles marking the years inside the trunks; the patches of mold growing ever larger helped by the north wind; the birds sleeping and quivering in their nests, then resettling their heads in the softest down of their wings…” 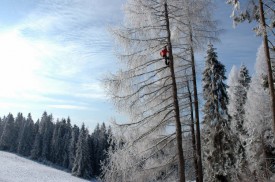 The concentrated experience of her ancestors shines through. Trees stimulate the imagination. Spending time in the sparser reality above rooftops, a forgotten level suspended over our heads, facilitates shifts in perspective and helps reset our senses. By climbing trees, Malik repeats a childhood ritual in perfected form. She performs an act of self-exclusion, infringing upon the order of left, right, and forward. She navigates a different, “inappropriate”, axis. Occupying tree after tree, she cuts herself off from order and an established position in culture. Her exotic clothing stands out in the landscape, signaling a vertical orientation. She turns the concept of hide and seek on its head: the child waits on the ground, camera directed upwards, while the mother climbs yet another tree in a daring feat of dexterity. An heir to the Romantic notion of the possessed woman and its Modernist equivalent — the hysterical female — Malik becomes a medium for supernatural forces, a temporary hermit, a superheroine. The unsettling foreignness of the feral act of tree climbing is a conscious transgression on her part, an encroachment of an unnatural element into our everyday lives. Many of the photographs show the artist in a pose resembling the figure in Delacroix’s Liberty Leading the People — a living allegory in the form of an active female body. With a few deft movements, she directs excess, wantonness, and unbridled energy back onto the beaten path.

In opposition to Angelika Fojtuch, Joanna Rajkowska, and Anna Janczyszyn-Jaros, artists who drag themselves along streets and sidewalks, often to the displeasure and disgust of passers-by, Malik bothers no one. She does not disturb the rhythm of city life. She assumes a vertical position with no outside assistance, often surpassing our concept of the vertical. Her position is higher than that of other pedestrians. When she finally slips silently back onto the ground, she is no longer noticeable, blending back into her assigned place. 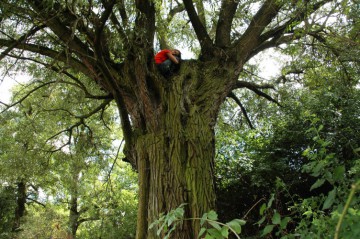