In the eighth movie of his career, Marek Koterski takes a creative approach to reviving the genre of the road trip film. He draws heavily on the gender model of Thelma and Louise, in which Ridley Scott demonstrated that the only escape route from gender leads straight into a canyon. And while the eponymous pair took a more radical path to fulfilling their freedom in a world of oppressive norms, the two men in Women are Somehow Different (played by Adam Woronowicz and Robert Więckiewicz) fall victim to the liquid reality of gender as well as their own frustration and prejudice. 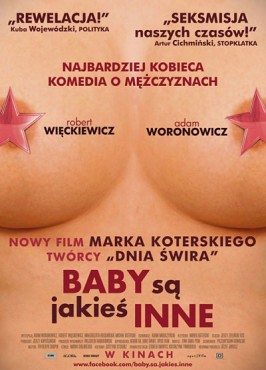 Women are Somehow Different, dir. Marek
Koterski, Poland 2011,
premiered 14 October 2011Nearly ever minute of the film is filled with “guy talk”: the familiar social phenomenon of men choosing their words carefully in an attempt to boost their image. Meanwhile, the structure of the film, including the narrative, relies on the painfully consistent use of mirror images. “I go right, she goes right. My right, that is”, Wieckiewicz says. That way they always run into each other. The men are portrayed as misogynists, sensitive to the differences between the sexes, or perhaps oversensitive about the topic (“Women are somehow different”), but ones who truly love women, differences and all (“Nowadays you can’t even tell if it’s a woman”). In effect, they become the pitiful victims of the opposite sex (“Mothers, man, mothers”).

The mirror isn’t just placed between the men and women, especially given that the latter usually come up in dialogue, making only a few appearances in scenes featuring the Woman (Małgorzata Bogdańska) and the Girlfriend (Patrycja Marciniak). Both men seem to function like two hemispheres of the same masculine brain — likely an ironic comment about their inability to communicate. They contradict each other in words and gestures (in an over-used technique, one man’s behaviour illustrates the grievances of the other), yet they remain united in their masculinity, locked inside their tin can of a car.

This solipsism is both a product and a reflection of the director’s signature style. One of the men calls himself Miauczyński, the other speaks in the all-too-familiar Miauczyński tone of voice, and the script is signed (you guessed it) “Adam Miauczyński”. Koterski’s world has always been detached and closed-off, and only serves as a context in which to place his frustrated characters. And while the director’s recognition of an important Polish neurosis is commendable, the story of this film doesn’t take place on the road as much as it does in a car — a plot with no characters, but instead with roles that just sit there and recite their lines. The result is not a portrayal of reality, but an illustration of the means of its portrayal. The language of the characters has been worn thin; the attempted poetic yet laughably clumsy use of Polish — a signature trait of Koterski’s characters — has become little more than a mannerism, a monotonous embellishment. While the technique may have given us the uniquely epic Day of the Wacko, in Women are Somehow Different, it’s little more than a series of shibboleths.

The director’s social diagnosis remains accurate in places, and his critique is not unfounded. He mixes a peculiar view of everyday life (in which leaving the cap off a tube of toothpaste justifies murder, regardless of the perpetrator’s sex) with media discourse (women in the news, women in sports), academic jargon (gender mainstreaming), and such bodily functions as farting and defecating. The Catholic Church and the sacred Matka Polka aren’t spared, either. The diagnosis itself would be poignant were it not so familiar. All that is left is a resentful lament by the never-changing figure of the “male”, i.e. the frustrated, educated, castrated alpha-male who resents Poland and the Polishness to which he is doomed. Everything intertwines cohesively, and while Koterski’s diagnosis isn’t subversive, everyone agrees that it’s not an easy situation to be in. But as the ancient proverb goes, there’s no point in pitying those who pity themselves. Particularly when the only thing the film has to offer is the age-old game of differences: “women are different, and they can sometimes be terrible, but how could we live without them?” I appreciate the peace offering and the declaration of love, but the game is a bit boring.

This game and this frustrated character continue to appeal to Polish movie-goers. On its opening weekend, the film drew twice the audience of Battle of Warsaw, despite having only half the number of copies. One could see that as a measure of success, although force of habit and the power of marketing might also have had something to do with it. But this anachronistic juxtaposition of struggles strikes me as relevant. The two films seem rather similar, and it would appear that the men are truly from another world. How about we call it quits, guys?