The novel is just right for a trip from Warsaw to Poznań with a break for a walk to the dining car. And there’s nothing wrong with that, considering the sheer number of hopelessly clumsy books being published and how hard it is to find something light to kill the boredom of train travel, even if it is soon forgotten. Yet I miss the old, belligerent Gretkowska. Examples of her funny witticisms, such as “a penis is a quote from a man”, are relatively few; instead, there’s plenty of genre-appropriate kitsch, including one scene in which, following some extraordinarily satisfying sex, a man sits his lover down in front of piano and asks her to play Pachelbel’s Canon. He then turns the fan to blow through her long blond hair, enjoying the view and the music, and gazing at his lover’s erect, dark pink nipple. Or another gem: “a silver platter of grapes of semiprecious stones and amber”. The taste of grapes of semiprecious stones and amber must be unforgettable. With all our fondness for the author, let’s just call it camp. 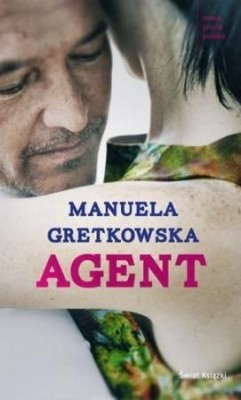 Manuela Gretkowska, Agent, Świat
Książki, Warszawa 2012, 224 pagesUnfortunately, I have no choice but to apologise to those reader who do not enjoy having the details of a novel, particularly its ending, spoiled. It’s hard to avoid, because there isn’t any complex depth to analyse in Agent; more than anything else, it’s the story of a love triangle and the most satisfying possible resolution thereof. And a handful of other trivia.

The three characters are a Polish-born Jew, handsome as a Hollywood heartthrob and uncommonly good-looking for a sixty year old, his Israeli wife, and his Polish lover, with whom he has a child – a boy named David, obviously. To keep his wife secret from his mistress, the character pretends to be an Israeli intelligence agent, which explains his prolonged absences, gives him an excuse for not picking up the phone, and keeps him from having to explain what it is he does during his trips. He gives his mistress sex and a child, while his wife receives diamonds and affection. Each of these relationships are hackneyed and deadly boring, as is the triangle itself. But the latter offers numerous opportunities to complicate the plot before the wife discovers the truth. An additional attraction is the issue of Polish-Jewish relations, a topic that always tugs at our heartstrings; the shadow of the Holocaust, the circumstances of life in Israel, and the prejudices that divide our nations. The main character, as a Polish Jew, facilitates not only the love triangle, but also the novel’s mission of achieving reconciliation between Poles and Jews.

It’s not enough that two tour groups of Polish and Israeli teenagers meet and get mixed up, leading to a rather complex and amusing intrigue, or that the wife, wary of Polish antisemitism, visits the country anyway and has her prejudices challenged. There’s still something missing.

Sadly, this is where I must spoil the ending. The main character’s daughter, a Hasidic Jew who is incapable of lying, forces her father to face the truth about his infidelity. This is yet another preachy moment in which the reader learns that religious fundamentalism doesn’t always end well. And that’s exactly how it ends here: the main character is so distressed by events that he dies of a heart attack. All what’s left is a sad – yet happy – ending. The old wife gives her younger rival an apartment, and the boy is sent to a Jewish school. His young life becomes an ultimate symbol of reconciliation. The rival wins another consolation prize: a good husband who has escaped the grip of a perverted mistress (there are a few racy moments in this book). The old woman, naturally, gets nothing. After all, she didn’t have much of a choice: suffering caused by infidelity or the death of her husband. The ending avoids having to deal with complicated relationships, resolving all the dilemmas caused by the triangle in one fell swoop.

In the end, Agent is a pleasant yet somewhat sad fairy tale. Youth and procreation come out victorious, along with a Polish-Jewish “why don’t we all just get along” moral, just as the train pulls into the Poznań station.

‘Should Not Have Been Born’ explores styles that contrast with those found in most of the poetry currently being published by young authors, and it warrants a reading if only for that reason.