Comics don’t have it easy. In fact, they never have. The fate of the comic book as a pop-cultural genre (is that still the case?) mirrors, to a certain degree, the story of jazz: once perceived as the most pedestrian of all artistic forms, relegated to the lowliest of shelves, to which no classy consumer would dare stoop, it gradually transformed into an increasingly niche and inaccessible medium. Once a musical style derided by upstanding citizens, jazz grew to become an expensive hobby for audiophiles. The path of the comic was similar: from pulp comic books to exclusive collector’s items. As recently as the 1970s, Janusz Dunin (literati, bibliophile – ed.) wrote about comics thusly: “All around the world, popular or pulp magazines are most commonly associated nowadays with the comic.” Yet the days of the comic book’s mass popularity are a thing of the past; in Poland, at least, it is now an object of reverence for loyal fandom, and, on the other hand, a genre that has the misfortune of being stuck somewhere between literature and art, with neither the former nor the latter recognising this “less than respectable” art form as their own. This alienation comes with other consequences: the habitual underfinancing of comic book projects, insufficient promotion for worthwhile releases, low print runs and equally lackluster sales, and, finally, the comic book’s degradation to the level of a commemorative publication, as is often the case with historically-themed titles. 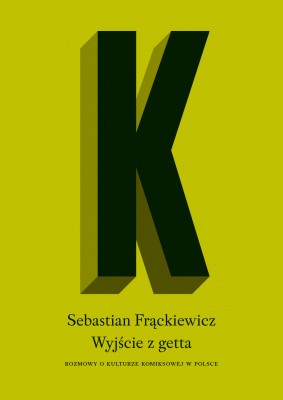 Sebastian Frąckiewicz, Wyjście z getta,
40 000 malarzy, Warszawa, 432 pages, 2012Sebiastian Frąckiewicz, an expert in the field of the graphic novel, has decided to examine the reasons for this unfortunate predicament. He has brought together thirteen names associated, in one manner or another, with Polish comic culture: the group includes the most acclaimed illustrators of recent years (Krzysztof Ostrowski, Agata “Endo” Nowicka, Michał “Śledziu” Śledziński), historians and theoreticians (Adam Rusek, Jerzy Szyłak), screenwriter Monika Powalisz, original art collector Krzysztof Masiewicz, and others. Together, they consider the reasons why comics – a medium that enjoyed such great popularity just 20–25 years ago – has now withdrawn into a niche from which it seems unable to escape. With all the foreign titles being published in translation, and the many interesting local releases, why have the media and the readers expressed less interest than publishers expected to see back in the late 90s, when they launched an attempt to revive the Polish comic market?

Wyjście z getta (Emerging from the Ghetto) is a pioneer attempt to diagnose Polish comic culture, and there’s no lack of topics to discuss. The only thing that would perhaps have made the discussion more complete would have been a voice from the manga/anime scene; while somewhat of a separate phenomenon, it does have plenty of overlap with the comic world, and thanks to such houses as JPF and Hanami, Poland has seen a few good titles from outside the Western publishing scene. But the book makes up for this omission with an absolutely priceless overview of the archeology of Polish comics in a discussion with Adam Rusek (in the interview he mentions an “anthology of his dreams”, which, if it were ever to see the light of day, could be among the most interesting titles on the margins of contemporary folklore studies). A touchy but unavoidable subject is mentioned several times: the commemorative historical comic books often commissioned by various institutions. The critique of the historical comic isn’t entirely one-sided: Witold Tkaczyk, publisher of such titles as Solidarity – 25 Years, claims, with the convincing frankness of a true enthusiast, that these titles document a certain process which, he hopes, will one day lead to the creation of historical comics that are interesting both as works of visual art and as historical statements. His opinion is juxtaposed with the views of Monika Powalisz, who has consistently followed an anti-textbook approach in her historical comics, opting instead for non-literalness and metaphor, avoiding monumental clichés, and collaborating with a different breed of illustrators (among the authors of Golden Bees, Olga Wróbel is the sole member of the comic book world as such).

Monika Powalisz, Zosia Dzierżawska, Golden BeesIn this collection of interviews, the relationship between comics and other art genres is a recurring topic, one that casts light on a certain troublesome aspect of the comic book, mainly stemming, as mentioned above, from its vague position vis-à-vis other artistic fields. Where exactly are we supposed to put it: closer to literature? On the visual arts shelf? Or perhaps we should just view it as another form of graphic design? The opinions are as numerous as the interviewees expressing them. The illustrators, animators, collectors, and publishers featured in the book share a certain hesitation and skepticism toward any attempts to pigeonhole comics. It’s striking how often they choose to follow their own paths, without placing themselves too close to the geeky comic world on the one hand, nor the hermetic art gallery scene on the other – even if that path is strewn with obstacles, as Maciej Sieńczyk, a self-proclaimed outsider in a world of outsiders, explains with disarming candor. Then there are those who skilfully sidestep any questions regarding their affiliation with “literature/art/comics (select one)“ and instead seek yet another name for what it is they do. Agata “Endo” Nowicka describes herself as an illustrator above all else; the author of the critically acclaimed Hikikomori, Jakub Woynarowski, proffers the distinct and new term “story art”, which he claims would take some of the weight off “comics”, which has accumulated enough baggage of its own. Others suggest that the marginalisation of comics isn’t that bad after all, as it allows artists freedom of expression to a degree that would never fly in the world of sponsored arts.

Frąckiewicz’s book poses a certain question, and in turn seeks to find a way to – as the title states – emerge from the ghetto. The author does not hide his support for warmer relations between comic culture and the art gallery world, as well as the greater inclusion of “story art” in the spectrum of visual arts. This notion has evoked great interest, particularly in light of the existing correspondence between painting and comics (see Wilhelm Sasnal, or the peculiar case of Maciej Sieńczyk, a regular feature in art galleries, who also considers himself a comic artist; interestingly, the field of his art he’s most fond of is just the one he’s been the least successful in, commercially). 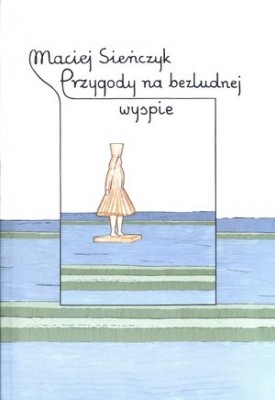 Maciej Sieńczyk, Przygody na bezludnej wyspieIn an interesting rebuttal, Jerzy Szyłak asserts that if there’s any ghetto at all, it’s the art galleries that have trapped themselves inside with their hermetic, institutionalised character and their propensity to pass arbitrary judgment on exhibited pieces. It is Szyłak’s conviction that viewers are capable of independent, informed appreciation of works of art.

His observation is valid, to a certain extent. It is not true, as some would have us believe, that comics have not gained a foothold in Poland. The Wilq series by Bartosz Minkiewicz, Śledź’s Osiedle Swoboda, and Marek Raczkowski’s drawings, which employ the comic strip format, after all (and were displayed at the arguably groundbreaking exhibition Black and White at Warsaw’s Museum of Modern Art), have all become permanent features of daily life in Poland. Yet all of this happened independently of the sheltering umbrella of comic culture. As Minkiewicz points out in his interview, the popularity of the comics in Produkt magazine stemmed from the fact that it had coincided with just the right zeitgeist and, more importantly, spoke to its reads in their own language, a rare occurrence in popular culture at the time. We can therefore surmise that there exists a certain (modest) margin of open space, which a select few comics with a universal message can burst into. But should we be satisfied with that state of affairs? The debate is just beginning.

The importance of Frąckiewicz’s book lies not only in the fact that it is the first such diverse, detailed and dynamic record of Polish comic culture and its environs. It is outside the “diagnostic” axis of the interviews, in between the lines and as an afterthought, that the true relevance of this title becomes apparent: the convergence of so many interesting and individual artists, each with their own, independent proximity to comic cultures, and each with something astute and important to say.

One upon a time John Wray lead a Twitter workshop in Wrocław. It was a part of The Reading Lab at the European Culture Congress. See the video

Who would have thought such dedication to art was still possible? – a comic strip report from the closing night