ZOFIA ZALESKA: Would you agree with someone calling you a street artist?

KRYSTIAN TRUTH CZAPLICKI: No, I’m more of an urban artist. I neither like nor use the term street art. I tend to be more sympathetic only when it’s translated from English into Polish, the latter doesn’t have such negative connotations for me than the former, but frankly speaking, both stem from a rather naive aesthetic. It doesn’t really matter whether we’re talking about a certain object or mural, for me the entire movement reeks of excessive decoration and interventions aimed at a mass audience. From my perspective, the beauty of creating in the public space lies in the fact that your works can be very personal, have strong intellectual undercurrents, and yet still look like a natural part of the local environment. Of all the art I encounter on the streets each day, I think I like letter-based graffiti the most.

I recently spoke to the American artist JURNE and he said something similar: for him, graffiti is primarily letters.

Czaplicki was born in 1984 in Wrocław, graduated from the Faculty of Interior Design and Designing at the Academy of Fine Arts in Wrocław. He creates sculptures and installations in public spaces. Czaplicki participated in multiple group exhibitions and festivals, his first solo exhibition, The Changeling, was organised recently by BWA Warszawa.

Oh, I agree. Even today, despite the fact the street art has developed tremendously, the best thing about it are the simplest chromes, done in black and silver, less elaborate but still retaining the form of a simple graphic mark. Because they’re working illegally, graffiti artists don’t have time to smooth out all the kinks. That results in their work being much clearer, and for me – much more energising. A few simple moves, then the filler, and it’s done – legal pieces are often too flashy.

To defend themselves accusations of destroying city property, graffiti artists are often dead set against simple tagging, claiming that their work is time-consuming and carefully thought out from an artistic perspective.

Yes, but that’s when they’re defending the worst part of their output. It seems to me that spontaneity and risk that accompany graffiti work are a crucial part of the movement, very unique, although quite unpleasant for property owners. The best time to do graffiti in Poland was in the late 1990s, when the right people were involved.

Who do you mean by “the right people”?

The WTK crew in Warsaw, for example, of Wrocław’s Roite. Their work has no needless additions, it’s letters only. You could see that they live for this, together, that they work for each other, want to bomb as many trains and city spots as they can, and that they’re having fun with it.

Have you done any graffiti work?

I experimented with spraying stuff on walls at the end of my senior year in high school. I did a few letter-based pieces, they were rather lame but my TRUTH moniker was born back then. Later on, when I was studying at the Academy of Fine Arts in Wrocław, I got really into my current interests, that is sculpture and spatial forms. 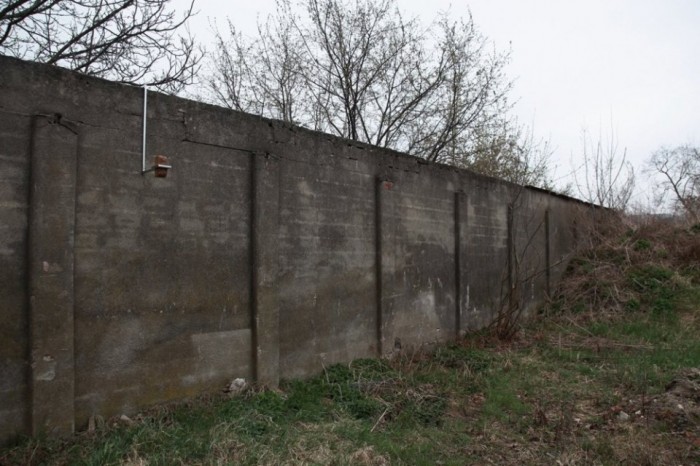 The graffiti episode was really important to me because back then I discovered the possibilities hidden in urban spaces. Fairly quickly I understood that working on the street means cramming more than just one dimension into a piece, that there’s fun to be had with the context of a given place. And I felt that graffiti doesn’t really take advantage of the opportunities present in the public space. I noticed that the cant of the streets, meaning everything that surrounds us – from lamps and sidewalks to buildings and the nature weaving its way into the things we made – is a complete set of tools. There’s no need for me to add any artificial objects because everything I need is right next to me. That’s why my sculpture interventions are based primarily on the contents of urban landscapes and the addition of any superfluous elements is a process involving much caution and restraint.

Are your sculptures and interventions created legally or illegally?

It depends. The bigger projects, requiring significant funding and advanced technology I do legally, because there’s no other way. I can’t just convince a bunch of pros to take a huge block of concrete and put it down somewhere illegally. But whenever I can, I try to get by without proper permits. If I always went for the legal route, I would’ve done maybe 10% of what I have up until now.

Your pieces are similar to paintings – they’re elegant and rather non-invasive, while graffiti is often bursting with colour and flash. Do you feel any connection with rebellious urban art nowadays?

Maybe it’s not obvious at first glance, but I believe that my pieces still contain some of that energy and unpretentiousness characterising graffiti work. My attitude towards public space was shaped by the work of multiple artists, including Gordon Matty-Clark’s specific interventions and cuts, Andy Goldsworthy’s ways of using the language of nature, Beuys’ social involvement, and Donald Judd’s practice of linking pieces to particular locations. I’ve been a long-time fan of Rachel Whiteread. Phyllida Barlow is also spectacular, she draws inspiration for her sculpture from the city itself. I feel like a loner, prowling the fringes of the art world and the street art community. I try to look at my work as I would on paintings an not just ethereal sculptures. I keep searching for an interesting frame in the public sphere and add my piece to it, as if it’s the last stroke of a brush. Along with my girlfriend Edyta, who’s documenting my output, I’m trying to capture that painterliness using photography. 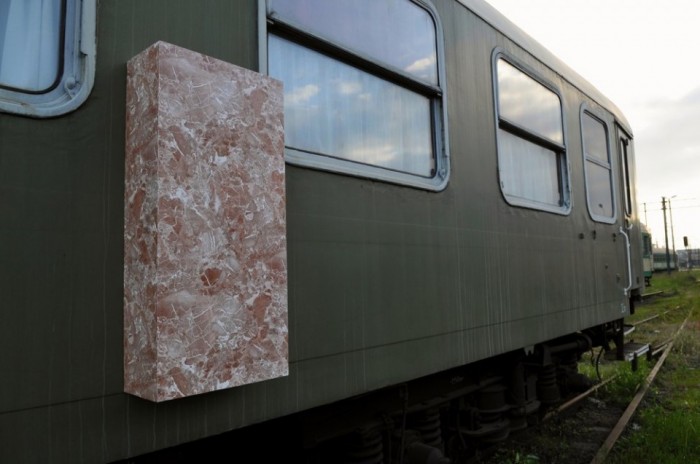 Your pieces are currently exhibited at BWA Warszawa. Do you feel in any way constrained by gallery walls, that your work is diminished by the white cube environment?

Not at all. The pieces that are exhibited at BWA are different from the ones I create in the city, the former were created precisely with the gallery in mind. I heard that some people complained that the exhibition consisted of such a small number of works. It was paramount for me to create a feeling of emptiness that will later recede to reveal the presence of object or sculptures. This is my first solo exhibition to lack full documentation of my urban activities and I treat it as the next step in the evolution of my own artistic language.

Do you enjoy working in a gallery?

Yeah. I feel free when I’m working in public spaces, but they don’t allow me to do everything I’d like to. I try to stay away from excessive interferences in the natural landscape. The ability to collaborate with a gallery is something new for me, and it’s also a kind of safety valve. Of course, I still prefer to work outside. The risk and uncertainty is what attracts me to creating within the street framework. Your pieces are safe in a gallery, while on the street it can be destroyed, either by weather, nature, or other people. Naturally, art works in a gallery are often just dead gadgets hanging on walls. 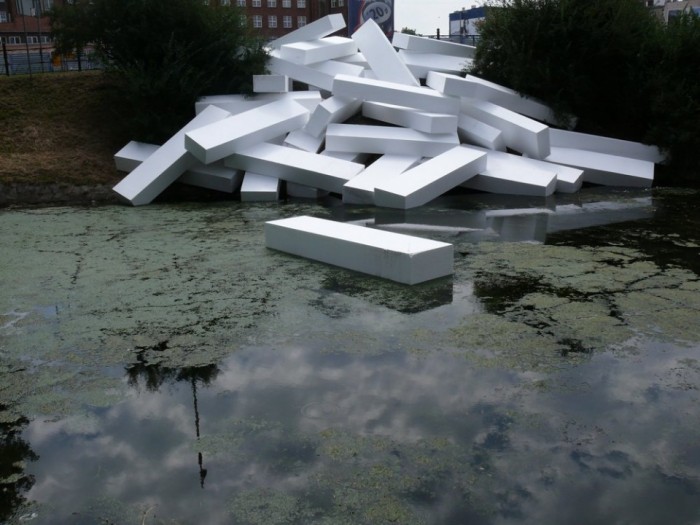 Your pieces are very personal and intimate, often hidden in some inconspicuous corner. Do you care about your audience?

I care about the reactions of my audience. Sometimes I’ll sit somewhere near my piece and listen to the comments of the pedestrians. I have a few funny stories about that. When I created an installation made from white styrofoam beads in Wrocław, somebody phoned the municipal guard to report an accident. The local crisis management team assembled on the same day, firemen started rappelling to gather the beams, they even had a team of divers on site. The entire installation lasted just a few hours. The people behind the project were afraid that the city authorities, which, by the way, laid down a lot of cash to support the project, would have a serious grudge against me – the installation disappeared before it was even unveiled. Eventually, we prepared a fragment of the installation for the vernissage. But the fragment disappeared as well, after something like 24 hours, the authorities decided that styrofoam beams can’t just lie there without anyone around because they constitute a threat to public security. A group of volunteers from a local high school banded together to watch them overnight. A downpour hit Wrocław at some point during their watch and when they hid from the rain, a group of drunks got very interested in the installation. One of them even took one of the beams and used it to cross the moat. After he was done, he put the beam back in place.

Basically every piece I do ends up attracting weird events. But these crazy stories, when I keep repeating them, tend to overshadow the private character of my work, and I wouldn’t want it to end up this way. I’m no provocateur. My sculptures are not meant to incite controversies.