Unconventional ventures, planned and directed by Cezary Tomaszewski, have become a sort of a specialty of Capella Cracoviensis under the direction of Jan Tomasz Adamus. The idea is to get away from the concert halls, to reimagine the ways in which people interact with music, to show the audience that vocalists are the same people as they are, the only difference being their singing abilities.

Until now, Tomaszewski tried to set up performances in places that weren’t obviously connected to music: the group sang Monteverdi in a milk bar and performed Gluck’s Orpheus in a sports centre. This time it was different: Felix Mendelssohn-Bartholdy’s Lieder im Freien zu singen for a capella choir were – as the title suggests – performed outdoors. And in motion.

The Naturalists is no outdoor concert, it’s a two-hour trek through Wolski Forest, a place that can be unpleasant to casual hikers, especially when it’s been raining: it’s full of hillocks, valley, ravines, and stone-strewn paths. And it was raining all Sunday afternoon. But before 18:00, the bus stop in front of the zoo, which served as a rally point, was filled with eager hikers clad in raincoats and galoshes. The “freshly washed” forest looked and smelled beautifully and two elephants gazed leisurely at the gathered humans. Nature was waiting for The Naturalists. 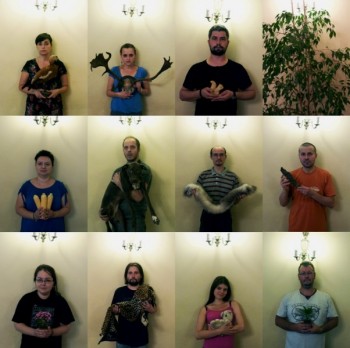 The Naturalists, Cezary Tomaszewski (concept and
directing), Capella Cracoviensis, Wolski forest in Kraków,
premiered 10 August 2012We received a short talk about the dangers of the forest (mosquitoes, ticks, exhibitionists, getting lost) and given the lyrics to the songs. Off we went – and the artists, the only thing distinguishing from other hikers were the huge carryalls they were lugging, started to sing. This very simple idea – singing romantic songs about nature while trekking through a picturesque forest – turned out to be the best thing ever.

The lyrics to Mendelssohn’s song are about retreating from the city, the longing for idealised nature, forests and spring violets, nightingales, skylarks, mountains, about how “in nature, everything turns to the good that has oppressed one’s heart” – in short, the songs glorify nature over civilisation. While leisurely trekking through the stony, muddy paths, breathing in the cold, fresh air and listening to the sounds and voices coming at us from all sides (the singers mixed with the rest of us) we enjoyed nature, and enjoyed art about nature. The performance was unrestrained and unpretentious, we could go on like that and listen to the group for hours on end.

But Cezary Tomaszewski apparently decided that the forest and Mendelssohn are simply not enough, or maybe it was too solemn, moody or romantic. It was certainly not attractive enough for him, that’s for sure. He planned a few stopovers, and during each one there was some kind of performance by the CC team that displayed their amazing ability to step back and look at themselves quite ironically. At the first stop, the CC artists scattered across the valley, hugging trees (under one of the trees they performed a group hugging, which was quite erotic too), while one of the girls danced with exaggerated ethereality, like she was some kind of forest elf on acid. At the second stop we found ourselves in a deep ravine, where we witnessed the mass funeral of stuffed animals – the singers cried and sniffed over carton boxes, making their solemn speeches (e.g. “I’m sorry I castrated you”). I must admit I was neither amused was I immersed in deep thought. A red dachshund (alive) that accompanied a married couple on the hike also looked quite bored.

The funeral smoothly gave way to The Rite of Spring – the boom box started blasting Stravinsky and the artists, dressed in “wild” clothes picked out the bags they carried, performed a decidedly amateur version of Nijinsky’s choreography. The Riding Red Hood was supposed to be the victim, but she ran off screaming into the forest. Maybe it was all supposed to demonstrate that nowadays we are unable to treat the relationship between humans and nature seriously, because no such relationship exists anymore?

Stravinsky and Nijinsky were still under the impression that portraying a ritual human sacrifice that’s supposed to make the soil fertile will shock audiences. For us, rituals like these are just funny, nothing else. It’s a pity that the performance looked more like a high school prank than something serious. The same sentiment was true for the next, and last, stop. When we were nearly back in the civilised world, the CC artists laid out blankets and radios on the grass (some of them wore bathing suits) and started throwing themselves in each others arms while Mendelssohn’s wedding march played in the background. If it weren’t for the beautiful scenery and music (as the artists sang at this stop as well), the whole thing would’ve been quite tedious. 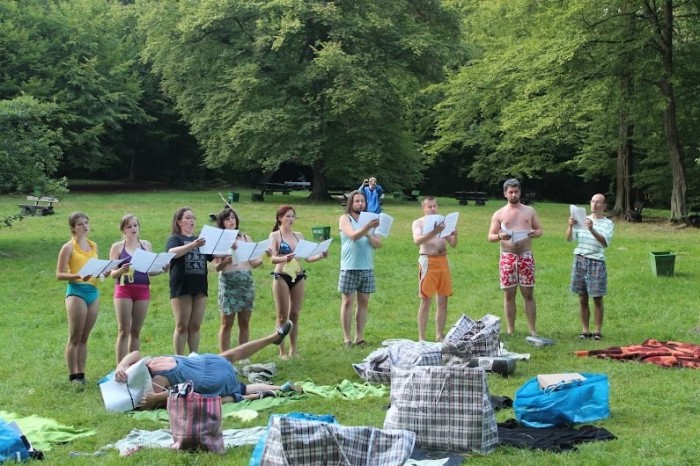 I feel there’s a certain problem with Tomaszewski – when it comes to general concepts (like combining performances with different places), he’s innovative and inventive, but he fails when it comes to details. He seems to think that every “absurd” idea has to be good. The thing is, this “absurdity” has no grace, it’s not delicate enough; it’s tolerable only because the surroundings and the music are fabulous, and the Capella artists are very involved and seem to have fun with every task they’re given. That kind of stuff might be successful for quite a long time, unfortunately, from an artistic perspective it will be nothing more than going in circles.