A stately, older gentleman holding a conductor’s baton: Krzysztof Penderecki and Bach, Beethoven, and Brahms. The standard image of the Polish conductor hasn’t changed much in decades. But 2011 marked a watershed: Tadeusz Wielecki revisited the stirring Holocaust-themed documentary piece Death Brigade – a 1963 Polish Radio Experimental Studio production – at the Warsaw Autumn Festival, while Filip Berkowicz explored two avant-garde compositions for strings: the infamously-titled Threnody for the Victims of Hiroshima (1960–1961), and a piece little known outside avant-garde music circles, Polymorphia (1961). And at the European Culture Congress, Berkowicz arranged an encounter between the composer of these two pieces and a pair of contemporary international icons in the world of non-classical music: Jonny Greenwood and Aphex Twin.

Both concerts were among the greatest musical events of the year in Poland. March 2012 marks the next installment of the project by Filip Berkowicz: the possible comeback of Penderecki’s avant-garde music with an international release on the American label Nonesuch Records. The album, which features recordings of Threnody and Polymorphia along with compositions by Jonny Greenwood (the Penderecki-inspired Popcorn Superhet Receiver and 48 Responses to Polymorphia) stands a good chance of causing quite a stir in the US and around the world. 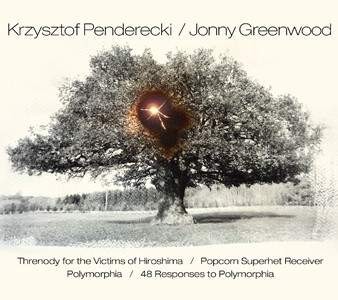 The 40-year-old Radiohead guitarist Jonny Greenwood reveals a new face: that of an artist who can proudly stand in the ranks of such post-minimalist music composers as John Adams and David Lang. Greenwood’s impressive interests are nothing new: he’s been fascinated with the sonorist sounds of Penderecki’s strings since he first heard them in the early 90s, and his favorite piece is Olivier Messiaen’s Turangalîla-Symphonie.

The English musician’s contributions to the record are certainly uneven, abound with clichés, and are occasionally downright boring (I would just get rid of Three Oak Leaves from 48 Responses). But the album as a whole – with its two main themes: a choral melody and pizzicato theme accompanied by bows striking the strings – is fascinating, particularly the opening of 48 Responses: Es ist Genug, as well as Baton Sparks, Bridge, and the final Pacay Tree.

But the Polish artists come out the undisputed victors of this musical duel: Krzysztof Penderecki and the excellent Aukso Chamber Orchestra from Tychy, founded and led by Marek Moś. Describing this unique group – which remains relatively unknown across the Atlantic – Jonny Greenwood said that he’d “never seen musicians work with such enthusiasm”.

Fifty years after its creation, Krzysztof Penderecki’s visionary music is finally falling on fertile soil. In the early 60s, the 27-year-old composer spent several months doing things with string instruments that were unimaginable at the time: scratching the body, throwing the bow at the strings, playing past the neck, and using violins to produce screeching glissandi, harmonics, and off-key microtones. As he admitted over a decade later, he was never interested in “sound for the sake of sound”.

Herein likely lies the secret to the timelessness of Threnody and the ingeniousness of the score that finally has a chance to takes its place in the international pantheon: Polymorphia. It is this latter, forgotten piece – performed by Aukso under the composer’s own baton – that sounds truly phenomenal on the record. It is the absolute heart of the album and it stirs the imagination; it is also a stepping stone for Greenwood, who opens the 48 Responses series with the piece’s final C major chord.

Polymorphia emerges from the basses’ low, out of tune E minor as if from an abyss, transforming into the sound of a bustling parish fair, screeching complaints, and pandemonium that is finally and unexpectedly subdued. This music molds a variety of states and emotions, leaving the listener with the impression of having touched something unnameable, some secret metaphysics. The piece as a whole has an effect not unlike that of a Bosch painting: it becomes a heart-rending fresco whose sounds convey a whole range of fears, anxieties, pains, and anguish.

The finale to this artistic vision of man’s fate is just as extraordinary: the bright, stable, confident C major chord cuts off all that came before it. It is in this recording that Polymorphia finally becomes a religious piece, anticipating St. Luke Passion (1966) and Morning Prayer (1971). It took over fifty years for great music and great musicians to come together, allowing this quality to finally be heard.

Who knows, perhaps Polymorphia has a future as great as that of another Nonesuch release some twenty years ago: Henryk Mikołaj Górecki’s Symphony No. 3. Anything’s possible.

Nonesuch Records releases an album of works by Krzysztof Penderecki and Jonny Greenwood, recorded in Alvernia Studios, on 13 March 2012

Biography of one of the most significant journalists of the twentieth century is now available in English. ‘Where does journalism end and literature begin?’ Artur Domosławski at the Frontline Club

Before you get going to Fotofestiwal in Łódź (6 – 16 June 2013) or Kraków Photomonth Festival (16 May – 16 June 2013), listen to the way stories are told by photographers Rafał Milach and Tomasz Wiech