Balcerowicz. Gra o wszystko should actually begin like this: Leszek Balcerowicz flies across the sky in a winged metal bird. The sky is blue and majestic, sweet sun rays piercing the friendly clouds. The flight is without complications. The landing is safe and smooth. The hero’s feet finally touch the ground (the Polish soil). His piercing gaze, the gaze of a true statesman, sweeps the estate. It’s peace and prosperity everywhere. Golden Terraces and skyscrapers abound and among them the proud Poles – entrepreneurial, clean, neat and fulfilled. 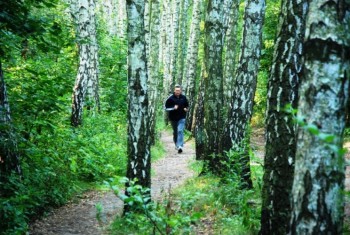 Balcerowicz. Gra o wszystko,
dir. Andrzej Fidyk, Anna Więckowska,
Poland 2009, HBO PolskaThe scene never happens, though, and it’s a pity because it would prepare the viewer for what’s to come. Balcerowicz. Gra o wszystko is a surprisingly biased work, one turning a blind eye to the world, to difference, to debate. Forget all those who don’t regard Milton Friedman or August von Hayek as gods; forget other narratives, forget Elisabeth Dunn’s Privatizing Poland and Naomi Klein’s The Shock Doctrine; simply forget the ugly side of transformation, those who’ve never recovered from it. Fidyk and Więckowska present only the pretty face of the coin, a smooth, polished surface in which the highest value of the new era is reflected – the new brave world. Warsaw looks like Manhattan, Rzeszów like Fellini’s Rimini. And above all this hovers the spirit of Leszek Balcerowicz – reformer, visionary, redeemer.

Significantly, Balcerowicz’s sole opponents in the film are figures so caricatural and grotesque that they can hardly be taken seriously: Andrzej Lepper, Zygmunt Wrzodak, and Roman Giertych. It is them that the former finance minister perceives as the real threat, as his real political opponents. Interestingly, he stresses that fighting them he felt like Władysław Kozakiewicz during his memorable pole vault at the Moscow Olympic Stadium. In fact, there are more references to sports here. The film’s opening scene shows the protagonist jogging in a forest. Then Balcerowicz talks about the specificity of middle-distance running, the cult of victory, and about efforts that get rewarded. These pearls of wisdom are like lay sermons: hard to listen to.

But it’s not Balcerowicz’s statements – after all, you can hardly expect him to be critical about the ideas he believes in and the solutions he advocates – that are the biggest nuisance in Fidyk and Więckowska’s film. It’s that the film plays but a subordinate role to its protagonist. Like experienced spin doctors, the authors do everything they can to make sure that, on the one hand, no crack to appears on Balcerowicz’s impeccable image and, on the other hand, that the image is warm, humane and profound.

The film’s main feature are scenes showing Balcerowicz, in a blue shirt (the collar unbuttoned, of course), sitting in an armchair in his library and talking, persuading. In terms of marketing, he does well. He throws an anecdote here, a joke there, puts in a luminous word or waves the flag of freedom. He also keeps making sure that his hands form a pyramid and there’s a meek smile on his face.

The rest are comments from the ex-deputy prime minister’s wife, who tells us little more than that her husband worked hard and was successful, and archival footage from the past. All this is accompanied and enriched by supposedly funny voiceover commentary that forms a clear story about how bad things were during the People’s Poland era: the country was in debt; people waited in long queues in shops where you couldn’t buy anything anyway; the shoes were uncomfortable and the oranges tasted bad. That’s about it in terms of the words of wisdom that this film offers.

Balcerowicz. Gra o wszystko is a cheap flattery that more than anything else resembles an election commercial. If Mr Balcerowicz decides to run for president in this year’s ballot, the film will surely come in handy for him.