Painted in red-and-yellow explosions, the cupboard has sharp, triangular curves. It stands on three legs and, for better balance, the lower part is connected at the back with the head by a thin, rigid tail painted in red-and-white strokes. From the upper part looks an eye-window, with two white boards of fangs protruding below.

Following a period of dense pictures full of insects, worms, and exuberant vines inexorably entwining objects and figures, a time of relaxation comes in Jakub Julian Ziółkowski’s art expressing through drawings of furniture pieces based on the simplest colours: red, white, green, blue, and yellow. These hybrid objects are in a state of transformation. There is something lively about them, as if an energy was pulsating under their surface, searching for an outlet. The cupboards keep piling up, dividing, tilting. Pyramid forms comprised of, for instance, several dozen drawers connected into prismatic sets, seem to have been prepared for a house removal, thrown chaotically one on another. Often in defiance of the laws of logic and gravitation, the different parts fidget, slip, or, alternatively, accumulate into colonies or lumps. Some are equipped with wheels or with features resembling legs, claws, or hooves. The peeling off pancake-like patches, tassels, branches, and suckers come from the familiar repertoire of minute divisions that the artist employs so gladly in the field of painting. 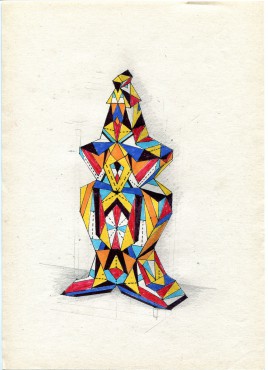 J. J. Ziółkowski's hybrid objectsIt echoes with Ziółkowski’s exotic trips: the lushness of a tropical forest, the stone figures, masks, ritual body ornaments. As if generated by a memory of the heat, silence, and humidity, drawings multiply rapidly in the agitated imagination, building a fragmentary scenography for a film about an unspecified tribe where cups grow together like Siamese twins, carpets resemble herds of fried eggs, ball pens have fins, and light bulbs sprout on tree branches and robots’ hands.

Jakub Julian Ziółkowski's retrospective is being shown in the prestigious Hauser&Wirth gallery in Mahnattan till the end of July. Timothy Galoty & Dead Brains consists of 28 paintings and gouaches. Great reviews in American press.

In all the projects, even the most surreal ones, the thickness of the objects’ walls has been clearly indicated. It seems you could easily screw boards or pieces of plywood together and then paint them according to the pattern offered by Ziółkowski. Like building bricks, puzzle pieces, or sheets of cardboard that you can connect by duct tape in any way you want. Some resemble famous designers’ projects, transferred to paper in fragments or imprecisely copied wholes. Despite numerous borrowings, they remain homogeneous thanks to having been filtered through the painter’s organic vision; as he said in one of the interview, for a year since arriving in Cracow to begin his studies, Ziółkowski avoided using the tram for fear of getting lost in the urban jungle. 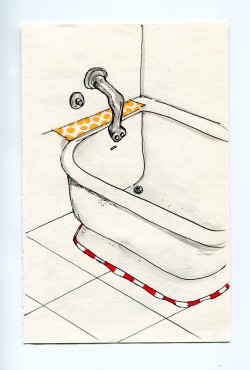 Ziółkowski's hybrid objectsIn the Do It Yourself collection, Ziółkowski wonders what would happen if objects were left to themselves. Would crossbreeding occur: the sharing of surfaces, shapes, textures? Serious functional mutations? The objects invented by the artist are repeated a dozen or so times in only slightly modified configurations. They will not leave you alone, returning stubbornly, demanding their own form, promising the pleasure of a gradual complication of the entry form. They can bear familiar names but their misshapen appearance urges the viewer to mark the unruly, fantastic part, which automatically means you give them a new name. The water-smoothed stone forms from the bottom of the ocean, oblong table tops and seats, bushy scaffoldings, and cobwebby arrangements can be divided into several subgroups: spider racks, seaweed tables, bodily furniture pieces made up of giant bones, armour-plated cupboards, wooden one-person rockets, crystal sarcophaguses. 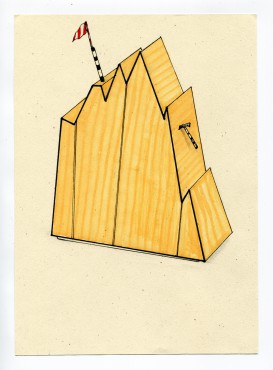 Ziółkowski's hybrid objectsMost of the objects have a clearly marked top, which gives them the appearance of geometricised totems in a version tailored to the average modern apartment. Ziółkowski trims forms suggesting unexpected leakages from caves, wigwams or tombs in order to fit them to size, adapting them to the non-standard needs of users tired with the predictability of the common arrangements. His projects hold a carnival-like potential of instability, of a sudden reshuffling of familiar elements, transforming a room into a playground, horror house, or circus. The bookshelves, wardrobes, and chests of drawers, based on modules dangerously close to hewn fragments of a wall unit, serve a dispersed invasion of new, eye-pleasing, multicolour parasites. This time less horrifying and not necessarily heralding inevitable danger, as in the artist’s paintings. The use of lined crème-coloured paper enhances the sense that the drawings were made a long time ago, that they are archaic, as it were. It is by this reason, among other things, that the objects make the viewer experience the kind of unease that typically occurs when you are in the vicinity of ritual objects: a mountain peak, a sacred tree, a crossroads, a ritual stone, gate, or rabbit hole. Designed with enthusiasm, panache, and home-grown passion, they are like Star Wars costumes made of old curtains and rubbish, perfectly liberated from the constraints of norms or routine.