What would have Szymanowski left to posterity had he not been a homosexual? This classical composer, devoted as he was to Art and artistic integrity (his abhorrence of patriotism prevented him from collaborating with Żeromski), obsessed as he was with the relationship between Jesus and Dionysus, in love as he was with the fabulous phantasmagoria of the Orient, would have been of no use in a time ruled by Reality, the Market, and Involvement. While his music is slowly growing in popularity around the world and has been recorded by Boulez himself (putting our Karol, who was known as Katot around the house, on par with Mahler and spectralists), it has become so deeply ingrained in his era, thanks to its ties to Strauss and impressionism, that even Szymanowski’s artistic interpretations of Polish Highlander music lose to the commercially successful experiments of Trebunie-Tutki, Golec uOrkiestra, and Karpiel-Bułecka. Only the fact that he was the first man in Polish culture to show up at dinner parties with his beloved boy keeps those with an interest in the artist from being banished to eternal exile in the academic ghetto of unwanted knowledge. Quite the contrary: it allows us to bask in the fashionable light of emancipation, gender, and psychoanalysis. 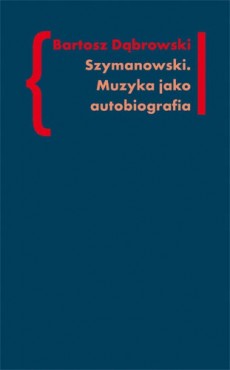 Bartosz Dąbrowski, Szymanowski.
Muzyka jako autobiografia
(Szymanowski. Music as an
Autobiography), słowo/obraz terytoria
Publishing House, Gdańsk 2010Biographies of famous people, written in modern times and in the past, show us just how greatly the world changes. I recently discovered an old book about Beethoven written by George R. Mark. This respectable researcher puts significant effort into proving that if the de facto celibate composer had any erotic desires, they were entirely heterosexual in nature. Meanwhile, using the same documents, one may easily propose, if not prove entirely, that his incomprehensible celibacy (astounding even to his contemporaries) was merely a lack of attraction to women, a result of the associated complexes, and an expression of his opposition to the world. We would no longer wonder why Beethoven cuffed a prostitute that had been sent over by his friends, or why he so fervently fought to take custody over his nephew Karl, and why he preferred to be waited on by boys and would dismiss girls for their supposed noisiness (even though he was deaf). We would understand his correspondence “relationships” with upper class ladies (inaccessible by definition) and why he never sent the letter addressed to his “Unsterbliche Geliebte”. Such an explanation never even occurred to his late 1960s biographer; a syphilitic Beethoven would have been acceptable, but a faggot Beethoven – never. After all, the biographer’s intent was to evoke fondness in the staunchly heterosexual readership.

Quite the opposite is true today: it is the margins of culture and its occupants that we find interesting. Were we to compare two books about Szymanowski, written in the current and past centuries, we might get the impression that the subject is not one and the same person (or artist). While the old biographies, despite having been written by his homosexual friends, either gloss over the issue of his sexual preferences, or portray them as lofty friendships or a communion of souls, contemporary books overflow with the word “homosexuality” and all its synonyms, used in describing this central aspect of the artist’s personality, and his opera King Roger has become a favorite among directors looking for an opportunity to display a gang of boys “half-naked and fornicating” on stage, perhaps not in keeping with the score, but with the clear intent to “please a shadow”.

To contemporary exegesists, King Roger is no longer a tough nut to crack (how does one describe and appreciate it while steering clear of the reef of homosexuality?), but a preferred subject in which Szymanowski’s emancipatory aspirations both achieved their fullest expression and were just as interestingly retouched. Following Tomasz Cyz’s exhaustive essay devoted exclusively to the piece (Powroty Dionizosa [The Returns of Dionysus], 2008), out comes a book by Bartosz Dąbrowski, Szymanowski. Muzyka jako autobiografia (Szymanowski. Music as an Autobiography), in which the theme finds its culmination.

The subtitle of the publication is a bit misleading. It is not music itself that is the subject of interest, but the numerous topics associated with it: lyrics, titles for program music, the circumstances in which pieces were composed, books he read, as well as the composer’s own literary attempts and correspondence. Dąbrowski’s thorough analysis shows that all of Szymanowski’s work (with the exception of his sonatas, études, and other examples of “pure music”) displays homosexual undertones or refers to homosexual imagery, often created from scratch by the composer himself. What more, his intellectual and artistic fascinations also followed a queer key (and sometimes featured queer camp, as well). This comes as no surprise. The trauma associated with homosexuality was greater then than it is now, just as homosexuality, culture’s leading hidden and coded entity, must have been even more engaging to the young homosexual than contemporary homosexuality, which is gradually becoming accepted as the norm. It’s a shame that the author only quotes the musical analyses of others, making no attempt to step outside his literary bounds and discover purely musical signs of homosexuality, that “homosexual tone” which – it must be said – is found throughout Szymanowski’s entire body of work, not just the pieces featuring text or a programme.

Szymanowski was blessed with perfect, nearly infallible literary taste, as shown by his instant enthusiasm for Irzykowski’s Pałuba, about which even the “experts” were initially apprehensive, as well as by his selection of song lyrics. Dąbrowski demonstrates that while all of his earlier vocal pieces (except perhaps for the German ones, where he fell sway to the “Dehmel trend” inspired by a popular anthology) constitute excellently composed wholes tied together by the crypto-homosexual symbolism of the grave, reeds, distant voices, etc., Szymanowski did not have literary talent (and any of his attempts in this regard are best examined through Dąbrowski’s intellectual prism, rather than in the original). Thus when starting work on his second opera, the composer turned to his cousin, a writer, for help.

The cousin was none other than Jarosław Iwaszkiewicz. Although a homosexual like Szymanowski, he did not share the brand of emancipation espoused by his cousin (who had already made his pilgrimage to the mythical town of Taormina), and thus approached the libretto “without conviction”, as Dąbrowski puts it, since “homosexuality was supposed to be both present and absent”. The result was rather awful (quoted sparingly but ruthlessly by Dąbrowski; the part where Roxana makes sexual advances towards Roger is particularly embarrassing), and the composer ultimately edited it, choosing instead to employ the “sublime idiom of the Petersburg milieu”, thus giving up part of this revisionist stances. King Roger is thus the product of an artistic compromise, and while it may now be regarded as a precursor of the few existing homosexual operas, one must admit that the music is inspired by orientalism in the style of the Mighty Coterie (and is rightfully criticised for not employing Sicilian folklore, which would have fit in better than, say, Highlander music with the mazurka), while the text itself is rife with “mysterious” suspensions of meaning and clumsy archaisms – a piece best listened to without hearing it.

The writing of King Roger essentially involved the “rape” of the younger slave of propriety by its older, liberated counterpart (although the events of the opera portray something completely different). It would be worthwhile to compare this collaboration by our two “Dionysian” artists with the “Apollonian” collaboration between Strauss and Hofmannsthal. We would surely learn just how doomed Dionysianism was at the time, how little chance it had of reaching anyone or even expressing itself, how poor its “own” intellectual background was, and how ubiquitous the shackles were. Interestingly, Szymanowski’s peer Igor Stravinsky gladly worked with homosexuals, including Diaghilev, Nijinsky, Gide, Cocteau, Auden, and Kallman, and these conglomerates of his “masculine” music and the “feminine” aesthetic of the text or production was invariably impressive, as was the case with Rake’s Progress, staged in Berlin by Krzysztof Warlikowski, which was excellent not because of its spirit of “liberated homosexuality”, but because Stravinsky was able to reign in Warlikowski.

Dąbrowski’s book ends unexpectedly (perhaps there’s another part on the way?) at the moment when Szymanowski is writing King Roger and the novel Ephebos which, unpublished during the author’s lifetime for reasons of decency, could certain be printed today and might enjoy success or even become a sensation, but perhaps it is better (for literary reasons) that the manuscript was burned and will remain a legend. It is also from the literary standpoint that Muzyka jako autobiografia is somewhat irritating. The author has chosen to consistently use the past tense (or more precisely: he uses it consistently with a few exceptions), which works perfectly in the biography of the composer (who does in fact remain in the past), but produces a downright grotesque effect in descriptions of his pieces (which still exist and have not been lost in some cosmic cataclysm) and when quoting opinions expressed by the living (who may continue to stand by views they once held). I cannot understand the reasoning behind this dubious measure – perhaps it is a form of rebellion against the rigid rules of the Polish language – but it is nevertheless weird and disturbing.

Aside from this detail, I can offer the author nothing but praise for his insightfulness, the thoroughness of his analyses, and especially for his sympathy towards the young Katot, and even for leaving us with further questions instead of final conclusions. Did Szymanowski’s choice to place homosexuality in the very center of his interests not have a detrimental effect on his art? How would he have written, had he not accepted his own homosexuality? And what would have happened had he not suffered the resulting torment of “exclusion and isolation”? It seems the homosexual “over-refinement” of Szymanowski’s music kept him from enjoying the success bestowed upon Russian composers (who were also removed from the cultural center of Europe), but then again perhaps it is impossible to be gay and an artist without being a gay artist, as to deny oneself the “homosexual discourse” (as German Ritz notices) is to banish oneself to the “expression of the impossibility of the act of writing itself” (best expressed in music by John Cage’s 4’33”, also a piece written by a homosexual).

To my surprise, it turned out that readers assume that our book demands an act of some sort: an apology, a confession, retribution. That’s not the case

Contemporary books overflow with the word ‘homosexuality’ and all its synonyms, used in describing this central aspect of Szymanowski’s personality

We don’t just live in Poland anymore. It’s time we abandoned the notion that we have any obligation towards Poland. Our obligation is to make good films

In these mediated times, it is hard to determine what the word ‘society’ means. Some writers, among them John Urry, claim that the social sciences will simply have to do without the term. A much simpler alternative would be to follow the network of ties and connections

I felt really sorry for Reinbert de Leeuw, who actually got so carried away in his mechanical conducting that the score fell from the stand. I’d have preferred to listen to the old ‘Rite of Spring’ under his baton. No revolution took place during this year’s Warsaw Autumn

I highly respect and admire Schaeffer's escalation of innovations but it creates the effect of “always something different, and thus always the same”