TOMASZ HANDZLIK: Would you play with a statue?

PIOTR DAMASIEWICZ: It all depends on what you want to refer to, what your intention is. If you’re asking whether I’d play with a statue that’s pretending to be a musician, then I would say that there’s no point in doing so, because statues don’t have souls. But if the statue were just a sculpture, a work of art in and of itself, and I were to play in its atmosphere, then sure. When I’m given a space, a shape, and an expression captured by another artist with his own soul, of which the work of art is an extension, then that’s something I can relate to with my music.

Your musical dialogue with Stanisław Dróżdż’s Concept-Shapes at the BWA Contemporary Art Gallery in Katowice was an example of just such a project.

Piotr Damasiewicz is a composer, trumpet player, activist, and founder of the “Music According To Art” Association, which showcases artists exploring alternative solutions in art. MATA gathers musicians, visual artists, as well as artists in other fields who are open to dialogue. His music is inspired by the traditions of hard bop, modal jazz and free-jazz, as well as European classical and contemporary music. His most notable projects include the Damas Ensemble (Power of the Horns), Piotr Damasiewicz Quartet (Mnemotaksja), as well as First Exit and the Escape Art Quintet. He is a second prize winner in the Krzysztof Komeda International Composition Competition (part of the Komeda Jazz Festival) in the category of jazz themes. Damasiewicz is also a member of the JazzPlaysEurope music platform, which gathers artists and composers from France, Belgium, Germany, the Netherlands, Slovakia, and Poland.

The performance alluded to concrete poetry, to the structure of the word, which acquires new meaning through partial deconstruction or spatial arrangement. The same thing happened to the sounds in my music, which was determined by the space of the gallery in order to present a new take on it. It was a reference to a particular concept by the artist.

That’s the course taken by the MATA (Music According To Art) Association?

That’s an organisation I created in order to draw different artistic worlds together, so that people who practice different fields of art would have a common space for dialog.

Was it a success?

In many cases, yes. If jazz is a niche genre of music, then there could be a benefit to associating it with poets, visual artists, dancers, and sculptors. Sculptors and painters could teach musicians silence, because today’s music is dominated by chaos, and the loudness or decibel level is only getting higher, sadly.

For musicians, complete autonomy also poses a hindrance to their development. They often revolve around their own closed – perhaps even academic – world of sounds, to the extent that they forget where the need for expressing oneself through music comes from. They become repetitive and start to devour their own tails. Their music becomes bland and technical, and lacks depth. That’s precisely why mutual inspiration between artists could be helpful. After all, there is strength in unity.

Are you a musician or a physicist?

But you also have a love for physics?

I’m interested in everything that happens in the world around us. But my interest in physics started by accident. My dad was listening to some of my music one day, and he said that it reminded him of hadrons.

So he’s a physicist?

No, he’s a doctor, but he’s very knowledgeable about science and he follows the latest developments. That comparison led me to start reading up on quantum physics. I also began paying attention to what was going on at the CERN laboratories in Geneva. Scientists there were trying to observe antimatter, a complete breakthrough in the history of human civilisation. And that was something that mattered to me. Not just in the context of being an artist, but just as a human being. So I started seeking out certain elements, analogies and symbols in music.

What kinds of analogies? 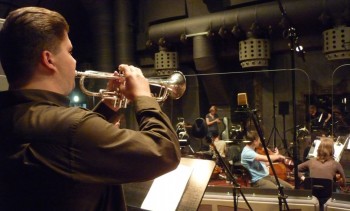 Piotr Damasiewicz in a studioWith the hadrons themselves, it’s a comparison between strong forces and the concept of free jazz. And then there are the three colours involved in the construction of a piece’s musical tension. Once I had the general idea of the expression of a piece, certain sounds and themes that I wanted to work into it, I still had to find the right form to complete the music. And that form is what I compare to particle physics. Physicists have assigned different colours to each particle charge: blue, red, and green. And in history, the traditional symbolism has been that red stands for expression, blue is intellect, and green is hope. Each part of a piece of music that I write has the qualities of one those colours. There’s a moment of intellectual exploration, the struggle of counterpoints, a growing tension, climax, and then the release.

What about antimatter? Can that also be found in jazz?

It should be a part of all music. What I consider antimatter in music is that which escapes tangible definition; it’s something that goes deeper, something that touches the emotions and the soul. It could be the musical expression itself, or the artist’s pursuit of the ideal. A pursuit of something more perfect, indestructible, and lofty; something that reaches places we’re not even capable of naming with the use of words.

Did you manage to reach that point on Hadrons album?

It’s just a symbol, but with every project I try to express my music in an earnest and uncompromising manner. Antimatter is an obstacle we try to overcome. It’s a very emotional way of releasing what we feel inside. That’s a challenge for us.

Where did the idea for this project come from?

It was a commission from the Jazztopad jazz festival in Wrocław. Piotr Turkiewicz, the artistic director, asked me to create a project that would combine jazz with chamber music.

A jazz band combined with an orchestra? That sounds archaic.

I don’t claim that my music is something completely new. It’s a combination of styles that have existed since the 20th century: chamber music, modal jazz, hard bop, free jazz, avant-garde. But most importantly, the idea was to initiate dialogue between genres; to create something that would be a counterpoint to most recent projects. Jazz and string fusions usually work by using the string section as a background. And it’s usually smooth, with the strings only complementing the other instruments and adding colour. On Hadrons, I tried to make them interact and direct the musical concept. So it’s not jazz plus strings, but rather symphonic jazz.

Why did you choose jazz?

Music was very much a part of our lives when I was growing up. My sisters had lots of good jazz records: Louis Armstrong, Miles Davis. I started listening to them when I was still a young boy. Later, in music school, I felt drawn to improvisation. It wasn’t jazz improvisation, of course, but I always felt instruments could still be played without sheet music. When I was 15, I took part in a jazz workshop, and something just opened up inside me. It came in and stayed there.

But the awareness that jazz is just a niche genre bothers you, doesn’t it?

It does, in many ways. For instance, it bothers me that we still have to fight to have jazz musicians recognised as a legitimate profession. That’s the hardest part. Because if you just do it for yourself, or for its own sake, then the satisfaction with who you are and what you’ve achieved is beautiful enough. But that just doesn’t cut it nowadays. You need to have a relentless strategy, and that’s scary, because it can stifle the authenticity – and also the role – of art. So you have to fight hard and take risks. If I didn’t believe that jazz, or music in general, could still grow and help us grow, I’d probably quit playing.

Sculptors and painters could teach musicians silence, because today’s music is dominated by chaos, and the loudness or decibel level is only getting higher, sadly – Piotr Damasiewicz

I couldn’t fathom that plant directors would just let artists wander around their factory floors. That could never happen in a socialist country – Bogdan Łopieński about the 1st Biennale of Spacial Forms in Elbląg in 1965

Nonesuch Records releases an album of works by Krzysztof Penderecki and Jonny Greenwood, recorded in Alvernia Studios, on 13 March 2012