Let’s not kid ourselves – Warszawa Powiśle has not stopped the torpor slowly overtaking the district and neither does it play in important role in the resocialisation of the local youth (even though I recently happened to read someone making that exact argument). As it often happens in Polish public discourse, when we stand by an initiative, we often try to find a higher purpose for it. Meanwhile the dive bar located near the midtown railway bridge in Warsaw shouldn’t have to justify its existence with a detailed plan of educational and cultural activities or social concerns. Allowing ourselves an evening of useless excess is what normalcy is about. Why? – the question itself is dangerous. “Why should Warszawa Powiśle continue to exist?” – let’s not fall into that trap.

All these places are located in Warsaw, but they have something more in common: recent problems with maintaning alcohol license or simply the right to continue their business. The peace of the citizens is at stake. Or is it the right of other citizens to enjoy “an evening of useless excess” as Paweł Soszyński puts it.

It’s not about the fact that foreigners like that joint or that it has character – and the crunch of broken glass nearby really factors into that character. The dive’s architecture is also of no significance. If only pretty and popular places had a right to exist and operate, I shudder to think which bars and joints would disappear from Warsaw forever. A small caveat – I do not share general opinion that Warsaw is ugly somehow. On the contrary, I love this city, its chaos, a lack of true downtown, the temporary character of its spaces, all of the local urban planning failures, awkward malls, the new sticking like a thorn in the side of the old, which, in turns, creates almost geological formations out of urban spaces. I appreciate this nearly “Asiatic” medley much more than the predictable shine of polished, pretty European capitals. Maybe Warsaw is not beautiful in a way that museum exhibitions are, but there’s a beauty to its untamed vitality – and that vitality can be terrifying.

Sometimes, thick knots form in this weird fabric of Warsaw and the chaos of the city starts to radiate towards them. Warszawa Powiśle is one such knot. How was it formed? I have no idea, must be some rule in the local urban physiology. Neither do I think that anybody would be able to reconstruct the knotting process – the dark character of the knot would never permit that. And Warszawa Powiśle has an undeniably dark charm about it: a combination of chaos, mess and noise. It’s like a distillation of Warsaw shaken in an explosion-prone alembic. In the summer, on Friday and Saturday nights, down there near the shaking railway bridge and the trees dying of urine overdose, Warsaw is a theatre play, we’re the audience, and the joint is open until daybreak. Maybe that’s why it’s so popular with foreigners and the city folk – they want to see the process in action and participate in it. For a few years, Chłodna 25 – currently in its death throes – embodied the ghetto spirit; the joint’s noise was the noise of the ghetto, which was perfectly captured by Malwina Konopacka in a comic that graced the doors of the dive when it was apparent that the end is nigh. In places like Plan B you can feel the echoes of the razed district that later served as the foundation of the Palace of Culture and Science (and inside the Palace, there’s still the occasional colourful bursts of red show curtains and sky-blue liquors). 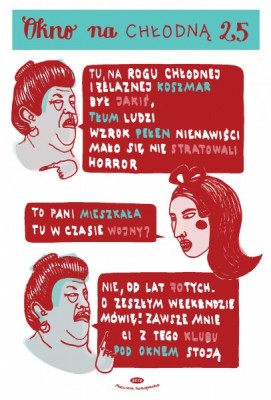 A window on Chłodna 25 – The horrors that
happened on this corner of Żelazna and Chłodna.
Hordes of people, eyes filled with hate. They nearly
trampled each other to death. A horror, I tell you...
– So you used to live here during the war?
– No, I moved here in the 1970s. I was talking about
last weekend! The people from that club over there
always huddle near my window.
Malwina Konopacka, courtesy of the artistPowiśle is different in character – wisps of mist off the Vistula float between the beach chairs (dear neighbours, that’s not cigarette smoke). You’ll find tracksuits from Praga here, fake furs from Nowy Świat, suits from downtown, and skin – sometimes naked – from Ursynów. All of that in constant motion, rubbing against one another, intertwining tirelessly and violently. It’s a perfect mess – an exemplary expression of this unique city. Its history replays itself in the broken glass in the morning, while the present – unruly, misunderstood and lined with vandalism – comes to life in the pungent smells and the rings of the intercoms. This city is a rascal, a charming rogue. Maybe that’s why it was, and still is, so full of parks and squares overgrown with shrubbery – like the one in Powiśle.

When we dismantle places like Chłodna 25 and Warszawa Powiśle, we destroy the mysterious medium which Warsaw inhabits when it wants to be seen. The Viennese cafes are not the true expression of the Austrian capital, the Parisian restaurants do not embody the spirit of Paris, and the squares of Barcelona are not what the Catalonian capital is all about. And wouldn’t we want so very much to have these pretty cities here? Warsaw is different, much more interesting to me, personally. It would be a great loss to cut it off from the stage where once or twice a week it shows us its true face. And because Warsaw’s otherness is its most important asset, it just manifests its nature a little differently.