I started reading this book with a fear that it might hurt. I guess anyone realising the level of confession attempted by the author will feel the same. She writes about her childhood in Nowy Sącz and Legnica, the hypnotic untangling of her Russian and Jewish roots, and about her son, who got killed before the drugs killed him.

Identification comes swiftly, but let me assure you, it is only painful for a moment, until the reader notices the subtle shell of the form. Whoever Anda Rottenberg is, the author's subject guards her secrets well. So well, that it raises the question if maybe one of the reasons why the book was written was the subject's desire to come closer to the object. 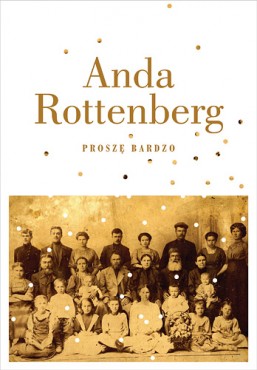 That is not to say the book departs from the truth, not at all. My point is more about the author being aware of the form and of the fact that no form is fit to tell the story of our lives. “Truth will spoil the form and break the rules by which a piece of writing is constructed. Truth is formless and therefore inconvenient; truth does not want to be squeezed into the rhythm of the phrase and does not fit in the composition, unlike fiction.”

In my work circles there is a cult figure, Professor Maria Ossowska, who is said to have kept a journal throughout her entire life. Legend has it that when she felt death was imminent she had it thrown on the dump. One can see it as a symbol. A symbol of what? Anda Rottenberg wrote her book against that symbol.

It is about shame. We live in an era of spectacle, but at the same time we are stifled with shame. “This is how it is,” one frank artist has said, “the only form in which we are able to talk about really important things today is joke.” This is not the place to condemn that impulse, but neither is it the place to justifying it. It is about therapy.

When Rottenberg writes about the shame of her father, who was ashamed “of others, of us, of me and of my mother”, and adds that she “could only be ashamed of herself”, I can hear the recurring refrain from my own childhood. “You should be ashamed” is what my mom used to say, whether she was about to cry or laugh. When Rottenberg writes about thick, blue men's long johns worn by her mom, she makes the same kind of effort to escape shame as I do when I talk about my mom listening to Radio Maryja. It is just as futile: because “we have inherited from one another a spiral of shame, which in every generation is differently placed and obscures reality in a different way.”

Is there a way to deal with this? Rottenberg has chosen provocation. In her book, she pours out bile and we can feel her depression wane with each page. Proszę bardzo is a part of a therapy aimed at regaining feeling. Contrary to the claims of Polish psychotherapists, it is not the emancipation of women that deprives them of feeling. Refusal of feeling may be a reaction to a world where women are expected to do only one thing.

But this goes beyond the androcentrism that is impossible to adapt to. Jewish women, who are Polish women, are also expected to do only one thing: they are supposed to choose between mommy and daddy. Anda Rottenberg refuses to do that. Refusal is the driving force of this book. As a matter of fact, it is a driving force of her life shifted to genealogy

But it is not the waking up of family ties, locked for decades in the freezer of nationality, that I find most fascinating about this book; the experience of a communist childhood (Marago coffee, Wuzetka cake, the song Rice Fields Drowning In Water) may mean that Anda Rottenberg has more in common with me than with her family abroad. What I find more interesting in Proszę bardzo is the non-family and non-overseas aspect. The feminine aspect.

Callousness is not necessarily just a rebellion against discrimination. It may be a rebellion against subordination: to Catholic family values, Catholic sensitivity and symbolic language, everything that is regarded as universal in Poland, while in fact it is just Polish and Catholic. That subordination is so conventional that we are ashamed to admit it is there, until it captures us ourselves. And it is all-pervasive – recently even the head of the left-wing journal Krytyka Polityczna confessed publicly that he had experienced conversion. In this situation, is losing feeling not the best option?

Callousness may also be the price to pay for living in a country where no one sticks their neck out. It is paid by all, especially the best ones, including those who have never been confirmed by anyone in their belief that they deserve something from life. Among them, there are a couple of men and a lot of women.

“If only they wanted to want”: with these words a prophetic poet lamented the Polish people, yet he failed to account for Polish women and the trouble they would cause once they had the desire to want. Women are born in the countryside – let us take it as a metaphor – and they want to go downtown. They feel and want more. The world is changing so fast, mothers know so little, fathers are here today and gone tomorrow. This is causing many problems. People like Anda Rottenberg are paying a high price for errors and excess desires, but it is not higher than the value of fulfilment they have won for themselves.

If I were to write about the Polish cultural community which is benefiting from that fulfilment, the virtual paper I would be writing on would have to be very patient. A spectre of the Polish cultural community is haunting Poland, but for the time being, in the absence of public media its only agora is the cemetery avenue of honour where those distinguished for their services are buried. The private media are for the majority, while the minority of readers and exhibition goers are less and less able to communicate with one another. Until they learn to do it, people who have rendered such great services to Polish culture as Anda Rottenberg will not feel at home here. They will always associate the public with the tactful question Renata Kim asked Rottenberg in an interview for the daily Dziennik: “Do you feel that you did everything to get your son out of addiction?”

The problem of women who are institutions goes beyond the case of Anda Rottenberg anyway. Have you noticed? When was the the last time we had a chance to talk about Helena Łuczywo, the creator of Gazeta Wyborcza? The first time was when she was reproached for her ancestors, members of the Communist Party of Poland. And the second, when the open-minded newspaper Dziennik published an interview with a man who had been sick for many years, who commented on her “genetic” and “one hundred percent” Jewish descent.

What is the mutual exchange of services within the Polish symbolic establishment about? In order not to be excluded, those of us who could, do not say everything, in return for which they can remain in the circle of “great Poles”.

Anda Rottenberg, excluded from the circle of “great Poles” at least since the time when a group of Polish Members of Parliament stated in 1993 that she belonged in Israel, rejects that exchange of services in her book. “That leniency. That generosity. That tolerance.” So she lost a few friends? But she made new ones.

From the very beginning he appears to be a silly figure, a cheap buffoon, a typical character at best, good for sealing the background against which the main plot unfolds

The best Chopin recording I know is Janusz Olejniczak’s album with music from the film ‘La Note Bleue’. Besides, Pogorelic’s concerts are admirable. Martha Argerich has her great moments too. But there is not so much of that. Blechacz is a very decent student, period. Nothing more

Death is death is death. A cross was put up after his death, and under the cross candles were lit

The goals set by Yael Bartana’s association are noble, but there is no such thing as an idea that cannot be improved upon

The society as a blind, co-molesting mother. Polański as a figurehead. The law, which is supposed to clean up afterwards

‘Know Your enemy! No time to waste. Act now! Tomorrow it will be too late.’