Bad books are a better source of knowledge than good ones. A hack writer will not lie. He will just unknowingly tell the truth, which the reader can easily recognise and make use of. The book by Gerhard Gnauck Marcel Reich-Ranicki. Polskie lata (Marcel Reich-Ranicki. The Polish years) has reached the ultimate in this department. Examples of the literary genre practised in Poland by Joanna Siedlecka (the author of Kryptonim “Liryka” [Code name ‘Lyric’], Warsaw 2008) are read with mounting surprise. The surprise does not at all come out of the calibre of secrets discovered by the author. “The goods on Reich” are extremely meagre, with the word correct returning disturbingly often. The surprise is followed by a question: who is the author to initiate this kind of investigation and absorb the reader’s attention with its paltry results? His book is written in a whisper. For a whisper to be heard at all, the distance must be shortened. As a result, one gets too close to the author – and it turns out to be unbearable. 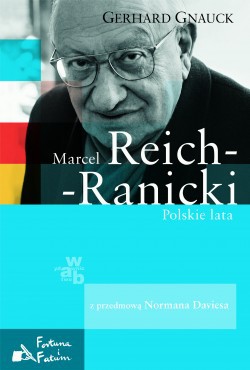 Gerhard Gnauck, Marcel Reich-Ranicki.
Polskie lata (Marcel Reich-Ranicki.
The Polish years). W.A.B
Publishing House, Warsaw 2009Admittedly, Norman Davies, who was persuaded to write the foreword, claims that the book serves the “public interest”, but either he must not have read the manuscript at all or we have discovered a previously unknown side of Norman Davies (“People who were terrified by the mere sound of the name of Hitler, demonised as he was, were not outraged by the name of Stalin” etc.). Rarely do you come upon books so ambiguous in their meaning, so pervaded with the envy of an untalented man towards his opposite, so eager to administer “historical justice” which attempts to pass for something other than it really is.

For several decades Marcel Reich-Ranicki, a self-described “half Pole, half German and a complete Jew” (a claim he vehemently denied 40 years later), was the most influential literary critic in Germany (still “West” at that time). Massive is the army of his enemies. Reich's position, built on an overwhelming cultural superiority over the crowd, would not have been as strong if he had not been put on the pedestal by two factors: his Jewishness (for a long time he was untouchable) and the time of his emigration from Poland to Germany.

The beginning of the sixties was a period of enforced silence there, a final “grovelling” phase, preceding the Frankfurt trials of SS men, when the contracture started to relent. By handing out praise and reproach in that world which surely remembered the Deutsch-Jüdischer Parnasus (in 1912 Moritz Goldstein wrote: “we Jews administer the assets of a nation which denies us the appropriate rights and abilities”), Reich-Ranicki was taking subtle revenge on the "race of supermen." It is not even about whether he was fair in his reviews or not. It is about art, similar to that of Tuwim and Słonimski in prewar Poland, pointing out illiteracy to Polish writers who were more “Aryan” than talented.

Today, at almost ninety, Reich-Ranicki never ceases to fascinate the German public. You can actually say the audience is just warming up. For centuries, the fall of the king has been a first-class plebeian spectacle. In Germany, as anywhere else, increasingly more is allowed in the public discourse. While in the past the country had exported mostly high culture, the product of its recent decades consists mainly of tabloids. The limits of what is acceptable are being moved back not only in tabloids, though. Especially in the aftermath of writer Martin Walser’s quarrel with Ignatz Bubis, chairman of the Central Council of Jews in Germany, in the late nineties. It was about an accusation made by Walser that “the Holocaust is being instrumentalised” (implicitly: by the Jews). Bubis, indignant over the allegation, moved out to die in Israel as a gesture of protest. He explained he did not want his tomb to be profaned in Germany one day. To no effect: his tomb in Jerusalem was profaned anyway.

Then came the time for Reich-Ranicki. Again, the bidder was Martin Walser. Tod Eines Kritikers (Death of a Critic, 2002), a novel whose predictably bad and vindictive protagonist greatly resembled Ranicki, paved the way for Gnauck-style historical writing.

Still, Gnauck's book is something more than a fantasy about the murder of a very bad Jew. The story is set in the real world and has the appearances of a biography smelling of the IPN (1) attitude (even file reference numbers are there). The narrative of persecution practised by historians from Towarowa Street (2) must be really contagious, if it infects people from abroad as well.

The author methodically and systematically prepares the degradation of someone who has enjoyed the status of a victim for too long. Meanwhile, horror of horrors, Reich has never been a victim (at least not the kind that would satisfy Gnauck)! On the contrary: he was active, shockingly and reprehensibly active. He used every opportunity to outsmart the butchers, to save himself and his wife. Inexcusable: not only did he win the war against the Germans, but in a way he gained control over them. And he never complained. He preferred to retaliate.

The retaliation, this time against Gnauck, was also the fact that despite the abundance of documents in files from the period of his service with the communists, the author did not actually prove anything about him. He was a communist, perhaps a spy. But if he was a murderer, it was only in the literary sense.

“It is unbelievable that he was allowed to live so long,” wrote Kafka about a certain person. Today, it can be repeated about Reich-Ranicki.

Page by page, despite the anticommunism and the file numbers: an embarrassment. Gnauck's comment on Reich's complaints about his isolation among Polish schoolmates: “As early as in his childhood, Marcel found out how important it was to present oneself the properly” (p. 26). A comment on his work in the Judenrat: “cooperation did not seem the worst option to nineteen year old Reich” (p. 46).

When Gnauck wants to comment on something stronger, he is not as brave anymore. He hides behind someone else’s words. Like those about survivors with “no sensitive conscience” (Ludwik Hirszfeld), very tactful in the context of Reich's parents who remained in the ghetto. Or these, my favourite, about “the role of the Jewish leaders in the destruction of their own people” (Hannah Arendt). Of course: it is perfect to hide behind a beautiful Jewess. The shadow is big, yet the one who quotes is clearly visible.

Many years ago, at the time of the Polish debate about Jedwabne, Joachim Trenkner wrote an important article for “Tygodnik Powszechny” entitled “What is seemly for whom.” It was about the astonishing ease with which some Germans discussed the burning barn (i.e. Jedwabne – ed.).

Gerhard Gnauck absolutely should have read that text, and if he has already (which I do not doubt), he should absolutely have referred it to himself. Had he done that, the reader of his book would ponder less often over the oblivion the beautiful word ungebildet has sunk into in today’s Germany.

Translator’s note:
(1) Instytut Pamięci Narodowej (The Institute for National Remembrance) – a public authority established to preserve the memory of Poland”s fight for freedom and prosecute crimes against the Polish nation committed during and after World War II. Some critics of the IPN claim the Institute’s historians are too eager to accuse people of collaboration with the communist secret Police, employing for this purpose secret files in an unquestioning manner.
(2) Head office of the IPN.

Death is death is death. A cross was put up after his death, and under the cross candles were lit

The goals set by Yael Bartana’s association are noble, but there is no such thing as an idea that cannot be improved upon

The society as a blind, co-molesting mother. Polański as a figurehead. The law, which is supposed to clean up afterwards

‘Know Your enemy! No time to waste. Act now! Tomorrow it will be too late.’

In her excellent, provocative book ‘Proszę bardzo’ (Here You Go) Anda Rottenberg rejects the rules of the game the Polish symbolic establishment so far abided by