Words beginning with the prefix “re” have become a particularly popular feature of new culture, which comes as no surprise if you agree that “2.0” refers to a new incarnation of old culture. Thus, faced with an embarrass de richesses, it pains us not to write about culture’s ubiquitous remixes. We also won’t be discussing whether new culture resets existing culture, wiping the slate clean of everything that is good and important. Nor will we claim that digital culture is one big garbage can from which we can salvage recyclable goods.

In our search for a way to keep from devouring our own tail (this is the 22nd installment of our alphabet), we sat down and conducted a review of all the topics we had thus far overlooked. It turned out that in writing about the influence of new media on culture, we had completely omitted the subject of the most powerful medium of the latter 20th century: television.

In discussions on the culture of interactive media, television is usually cast in the role of the “whipping boy”; a medium once used by the elite to admonish the rest of society before the internet was invented. The more democratic communication model we have today was considered the harbinger of the death of television.

But are there really any signs of the demise of television? No. Why not? Because today’s television is not the same television of yesteryear. It is remediated television.

“Media constantly comment on, reproduce, and replace other media,” write J. David Bolter and Richard Grusin in their 2000 book, Remediation. Remediation is the process by which media influence other media, thanks to the fact that none of them exist in a void. Old media shape newly developed media; as Lev Manovich writes in The Language of New Media, “the visual culture of a computer age is cinematographic in its appearance.” It was developed, after all, in an era in which cinema was the source of visual metaphors. 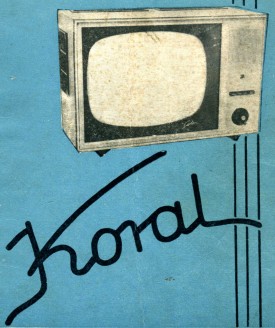 source: Koral TV set User’s Manaul,
Wikimedia CommonsOld forms are also changing under the influence of their successors. Broadcaster respond to the appearance of competing media formats by changing their own. The habits of media consumers are changing as well. Digital media thus incessantly remediate their predecessors. Content that was once served up as structured, linear sequences arranged by producers is now being transformed into databases. The way we use television has begun to resemble the way we use computers: we choose what we want to watch, and where and how we want to watch it. But what does all of this have to do with television?

Both of us watch a lot of TV shows. So do our friends. There’s nothing surprising about that, unless you consider the fact that one of us doesn’t own a TV, and while the other does have a television set, he keeps it stowed away in the attic. The intensive consumption of televised content no longer needs to involve the use of a traditional television. How we watch TV has also changed: viewing shows as they are broadcast is just one of the available options. The TV set is no longer the only television interface, and in some circles, it isn’t even the primary interface. Our television habits have also been subjected to remediation. The ones Marshall McLuhan spoke of when he compared the radio to the tribal drum and the TV set to the campfire are disappearing. Nowadays, we rarely watch and listen to the same things at the same time. We don’t meet in front of a screen, instead choosing the rhythm and contents of our media diet ourselves. No longer do Poles all sit down together to watch the 8 p.m. feature film on Channel 1. Nor do families gather for the ritual of watching together; children often have TV sets of their own, or prefer to sit in front of the computer. Yet much of what we watch is still television, which remains an important source of online content.

How does our abandonment of tribal drums and campfires affect social bonds? Do we weaken our sense of togetherness when we individualise our experiences? Not necessarily: that’s just one side of the coin. We still have a strong need to share our experiences. Take for example one website that can be described as “remediated television”, where we choose what to watch: YouTube. 20 hours of footage are uploaded to YouTube servers every minute. The resulting video database is so immense that everyone will find something of interest. One might assume that viewers would burrow into their own cultural niches, one that encompasses a single person with their personal selection of content, but that is not the case. We have a strong need to experience culture together, even if we consume it separately. In social networks, which enable users to share what’s going on in their lives, links to videos are posted just as frequently as status updates of the “what’s up” variety. Popular content is like a form of currency exchanged in interpersonal networks. What we end up watching is, for the most part, what our friends watch. Or we might choose our friends based on a shared interest in a particular type of content.

Believe it or not, only two weeks after Hitler found out about the fire that consumed Warsaw’s Jadłodajnia Filozoficzna club (fire that stirred emotions among Varsovians, regarded by many as a nonaccidental event – ed.), the short remix has racked up 150,000 views and been watched by half the capital. Many viewers, having discovered the video, shared it with their friends. Would you consider that to be a weakening of social bonds? We remediate YouTube by changing it into TV.

We remediate ourselves, as well, by using electronic equipment to transform ourselves from passive consumers of content into broadcasters of audiovisual content. In his latest book, Communication Power, Manuel Castells notices that when we produce and transmit private content, we have at our disposal mass media technology: private TV stations on the internet. Once reserved for TV shows that were carefully selected according to popularity and attractiveness to advertisers, remediated broadcast media now serve to transmit even the most banal, everyday occurrences. While tailored to the needs of millions of consumers, content distribution channels often serve to present “media without an audience” (a term coined by Eric Kluitenberg). The typical blog is read, on average, by less than one person. It is thus no accident that YouTube’s motto is “Broadcast yourself” rather than “More video than you could ever watch”.

New culture, to an even greater extent than before, is a culture of versions. And it’s not just thanks to the term ‘culture 2.0’, although the label itself is not without meaning

Folksonomy is simply another word for social tagging

The disruption of the existing system of gatekeepers, and along with it the ‘raison d’être’ of many people and companies, has made the debate on piracy more controversial today than ever before

While existing institutions of culture or the media that transmit it may disappear, culture itself is here to stay

Art, like a particularly vigorous strain of bacteria, can now blossom in nearly every environment. Machinima is made precisely because it CAN be made – and because there are people willing to do so

In these mediated times, it is hard to determine what the word ‘society’ means. Some writers, among them John Urry, claim that the social sciences will simply have to do without the term. A much simpler alternative would be to follow the network of ties and connections

What does Linux have to do with culture?

An ordinary individual has no competence to act as an effective gatekeeper for the virtually infinite mass of information made available by the benevolent fool, the internet

Fan creativity began with short stories, but already in the 1980s montage films, created on the basis of official, professional productions, played an important role in fandom output

The naive belief and the subsequent crash were obviously related to perceiving the internet in the 1990s as a kind of technological miracle that, as if by magic, would solve humanity’s problems

The idea of ‘free culture’ stresses the notion that intellectual property laws are not just the domain of nuance-loving lawyers, but an issue that should concern all of us