The outbound roads of cities are particularly stricken by the plague of commercial signage. Warsaw’s Aleja Krakowska rivals Kraków’s Zakopianka. Large-format outdoor advertising is plastered tightly onto houses, fences, and even abandoned buildings, forming an asemantic, visual cacaphony. Sometimes the advertisement medium clashes with the message itself. “KRAKÓW: AN INVESTMENT-FRIENDLY CITY” announces the gigantic lettering on a sign stretched out on an abandoned concrete edifice, one whose structural integrity raises serious doubts about the claim. No, I don’t mean the forsaken corpse that is the Kraków Forum Hotel, which remains the country’s largest advertising medium. Facing Wawel Castle, the building sparked heated debate last year when an advertisement for “Cold Lech Beer” was hung on it, a not-so-opaque reference to the recently deceased Polish president, interred at the nearby castle. Today, the pink soap bubbles advertising a telephone company stir no emotions. It might strike one as odd, however, that the ad agency forgot about the ancient symbolism of the soap bubble as a representation of the transience of human life and its illusory nature. One can’t help but marvel at the belief that roadside advertising — that annoying visual gibberish, worthless both in terms of information and marketing — has any efficacy at all. Who is its target? Irritated drivers stuck in traffic? Or those who, having liberated themselves from the traffic jam, proceed to break the speed limit? 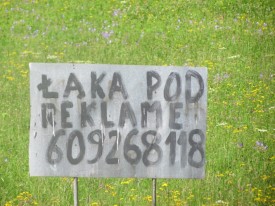 It’s not even funny. What we are dealing with is unprecedented pollution of the environment and public space. A cultural catastrophe. An embarrassing defacement and scarring of the landscape. The album Polski outdoor. Reklama w przestrzeni publicznej (Polish Outdoor Ads: Advertising in Public Space) by Elżbieta Dymna and Marcin Rutkiewicz is one of the most depressing records of contemporary Poland, a country that has been sold for advertising space. Advertisements that, unfortunately, reveal Poland’s cultural backwardness.

“In thirty years, people will look at this pictures and gasp in disbelief that we let this happen to our landscape. The worst that could happen — and, indeed, has happened — is that we become indifferent to this whole mess,” says Dymna. Two years have passed since these words were published, and there is still no hope in sight. The Polish landscape is AUTO BODY SHOP, AUTO REPAIR, TIRES, EURO TIRES, SHEET METAL, TRAPEZOIDAL SHEET METAL, METAL ROOF TILES… and the YEAR OF CZESŁAW MIŁOSZ.

Later that summer: Poland is not yet lost

After a month of summer vacation, I am glad to announce this optimistic update to my catastrophic vision of Poland as a country befouled by the work of outdoor advertising companies, a land obscured by a filthy curtain of billboards and signs. Poland may yet see a future other than that of a field rented out for advertising.

To describe it as modest would be an understatement. Little more than a scrap of sheet metal nailed to post, the sign read: PRIVATE PROPERTY. OPEN TO THE PUBLIC, BUT NO LITTERING. 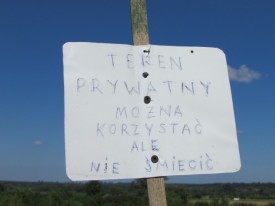 Private property. Open to public,
but no littering.
photo Maria PoprzęckaBarely legible and faded from the rain, I restored the sign before photographing it, respecting the original design. This uncomplicated yet necessary restoration, which involved touching up the lettering with a pen, was required for a number of reasons. Not only did it legalise my wading in the tall grass; not only did it legitimise my presence in this astoundingly beautiful wilderness; not only did it offer breathtaking views of the high water level in the Vistula; it opened alluring and convincing prospects of a social order.

First, it contained a proposal for the settlement of public-private disputes. Inevitable disputes that erupt at the slightest provocation and are difficult to resolve. Disputes such as these are largely typical of democracy: both sides have their points, their business, and their lawyers. The squabble is almost palpable: “No landowner is going to keep me from enjoying the queen of Polish rivers!”. Yet instead of a quarrel, we are offered a simple solution that reconciles property rights (“Private Property”) with civil rights (“Open to the Public”) while posing a condition (“No Littering”). This solution could serve as a model for self-limiting on the part of landowners, a model that also places limits on those who benefit from this self-limiting. It is a call for shared responsibility, rather than a lordly gesture, one that keeps the balance between exclusivity and egalitarianism. 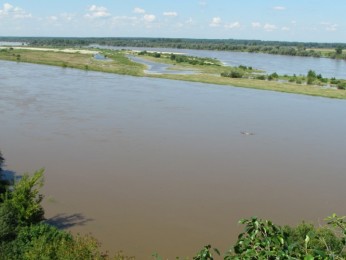 Second, the sign — in its simplicity — may be considered a model according to which potential conflict-breeding relationships can be regulated. No bans or commands, not to mention threats of fines. Its terseness stems from a certain degree of trust in the audience and the belief that consensus is achievable: I will share my property with you, and I ask in turn that you respect it.

Who came up with this bucolic vision? We are in one of the most beautiful spots in all of Poland. Can beauty spark civic responsibility? What 19th century utopia is this?