ADAM KRUK: Four years ago, you and Zbigniew Sobiecki co-founded the social networking site Blip. Has it been a success in Poland?

MARCIN JAGODZIŃSKI: When I started Blip, I assumed that it would be one of many microblogging sites in the world, just as there are many blogging platforms out there. As it turned out, the network effect of Twitter was strong enough to wipe out most similar sites. But Blip has survived to this day, thanks the fact that the site was founded early on and had good functionality. It’s rather surprising that practically no other country, aside from China, has managed to produce a microblogging platform that has survived this long. 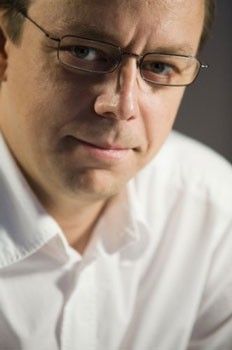 What is it about Blip’s 160 character limit that makes it so appealing?

The whole microblogging model is basically a cool niche. Twitter wasn’t well known in Poland back when we were launching Blip, and we implemented a lot of functionality (such as photo and video attachments, text messaging, and hashtags) that didn’t appear on Twitter until much later. Twitter started out as a text messaging site — a format it later abandoned — which is why the character limit was initially set to 140, plus 20 for the username. We also quickly realised that sending text messages would be cost-prohibitive in Poland, so we added the 20 characters right from the beginning. That’s how it all started, but the form had other consequences as well: it turned out that brevity was the cure for content overload on the internet.

So to cope with the sheer vastness of interconnected content on the internet, you have to know how to set your own limits?

Sadly, the internet has proved that people are unwilling to practice self-discipline. If they can do something, they will do it, with no regard for the consequences. No one cares if anyone even reads their posts, if they’re just spamming other users, or even making the system unusable. There have been calls for us to extend the character limit, and while that’s technically feasible, it would defeat the whole purpose of microblogging, where posts are supposed to be readable at a glance — read, not studied like blog posts. That’s not a limit, it’s the whole idea.

Biweekly.pl will be holding Twitter workshops this September at the European Culture Congress, conducted by the American novelist John Wray, who has been writing a novel on Twitter for the past two years. Perhaps you could say that every microblogger writes their own novel in tiny installments.

Marcin Jagodziński is an entrepreneur and blogger. He is the founder of Poland’s first OpenID server and Blip (short for Bardzo lubię informować przyjaciół, or “I love updating my friends”), Poland’s first microblogging site, inspired by Twitter. He also runs several blogs: Można Gościom, a culinary blog, Airnews, which features pictures of airplanes, and blogs about the internet, Netto and Brutto.

Microblogging sites have been trying to define what they do for a long time. I admit that I wasn’t quite sure what I was creating in the beginning: was it going to be a communication platform like instant messaging, some kind of group text messaging site, or a blogging platform (but designed for shorter posts), or a discussion site, where you could easily jump right into a number of different discussions taking place in real time? I think the latter best describes the direction Blip ended up evolving in; it became something like a 21st century answer to IRC. You can approach the medium in a number of ways. It’s very flexible and I think that that’s the secret behind its success. Blip and Twitter are built on short messages sent to people who subscribe to them. All the other functions, such as retweeting and hashtags, are secondary. The concept itself is as simple as a sheet of paper and a pen: anyone can use them for whatever purpose they see fit.

Such as self-promotion. Where do we draw the line between sharing information in a healthy manner and marketing?

The coolest thing about Blip and Twitter is precisely the fact that they provide few opportunities to invade the space of others; everyone subscribes to whatever information they feel like reading. We launched hashtags on Blip, which largely serve as thematic channels and are designed to slice up the networks that we create for ourselves. We usually follow what we know, but the most interesting things are precisely the ones we didn’t even know we wanted to know.

Have blogs and microblogs increased the number of people who write?

Twitter workshops will be held 8—9 September at the European Culture Congress in Wrocław as a part of the “Reading Lab” programme and the Biweekly.pl series SHORTHAND. The workshops will be conducted by John Wray, a famous American novelist, contributor to the New York Times, Brooklynite, and University of Columbia lecturer who has been writing a novel on Twitter for the past two years.

Registration for this event is now closed.

Find out more about SHORTHAND here.

I don’t know if they’ve grown in number, but they definitely get more exposure. The internet is a great place to explore your hobby, whether it’s cooking, photography, or writing. People find interesting books online, but on the other hand, they read less because they spend more time on the internet.

Studies conducted by Forrester Research show that while the number of internet users is growing at an astounding pace, the amount of content posted by them is dropping. There are many dead accounts that serve only to listen in on others. Is the blog era coming to an end?

I’m not convinced that they have. There are generally three types of blogs. The first kind are personal blogs that serve as journals in which people write about events in their lives; the second are hobby blogs devoted to certain interests — there is some overlap between hobby blogs and professional blogs; and then you have corporate blogs, or pseudo-blogs. Let’s set aside editorial blogs: they just pretend to be real blogs.

As far as personal blogs go, I suspect that there are fewer and fewer bloggers who write about their own lives. I launched the www.blog.art.pl blogging platform ten years ago and I can see that the people who started posting back then have managed to describe, define, and gotten to know each other by now. What they’re looking for now is a simple and shorter way of communicating, such as social networking. Teenagers still take up blogging (they don’t like Facebook due to the lack of anonymity). Corporate blogs, on the other hand, have been a total crock since the very start. Despite the claims of some, no one wants to read long-winded posts about the business of some company. That’s why content of that type has completely moved to Facebook, where short, terse wall posts and occasional contests are a much more appropriate format. Conversely, hobby blogs — where people write about their personal interests — have been going through a phase of spectacular growth. Facebook, which offers a very limited communication format, has completely failed to cannibalise that segment of the blogosphere.

The early adopters in every new social network are an avant-garde of active and creative users who then abandon the site once it becomes too popular, taking other users with them. Is there any way around that?

The very concept of the social network is running its course. All of them share a similar purpose: to talk to others (which was already made possible by email, but social networks were better at it) and, above all else, to follow others and find out what they have to say to us and the world. All you really need is a way to post a link with the source of the information; the rest of the platform is dispensable. I suppose that a social networking layer will soon be implemented in operating systems: you’ll be connected to a social network, but you won’t necessarily need the website to consume the content. Twitter and Blip have given rise to a enormous number of client applications that allow users to read tweets independently of the website — under blog posts, for example. The new Google+ social network has already launched a feature that allows users to communicate with people who don’t even have never even heard of the site. We’re also seeing an enormous shift towards mobile apps.

Websites like MySpace or the Polish social network Grono, which are strongly focused on creating a “place” rather than a channel through which information can flow, quickly become boring, like a restaurant or a club. That’s completely understandable. Instead of thinking of social networks as homes that we build for the rest of our lives, perhaps we should view them as movies: they start out on the big screen and then go to the small screen, and no one expects them to remain in the foreground forever.

Facebook users are beginning to show signs of weariness and are shifting parts of their online life to other sites. Facebook was created at American universities for a completely different purpose than the one it’s used for now, and a number of structural issues are beginning to come out. It’s a very limited marketing tool for companies, for example, and the word “like” has completely lost its meaning. This raises the question, what will replace Facebook? Making the leap to another platform would require users to leave a lot behind. They’re not going to switch without a very enticing alternative.

How many real, film, or literary figures have actually achieved true happiness by putting it all on their careers?