Just after midnight on New Year’s Day, when we were hugging our loved ones, texting our friends, listening to the Pope or to Europe’s Final Countdown, a small cultural miracle took place but went unnoticed. Precisely that day the copyrights to the works of hundreds of authors – including Tadeusz Boy-Żeleński, Virginia Woolf, Ignacy Paderewski, and Marina Tsvetaeva – have expired. The works became public domain. It’s a cultural space that collects all the works that are not covered by intellectual property rights. 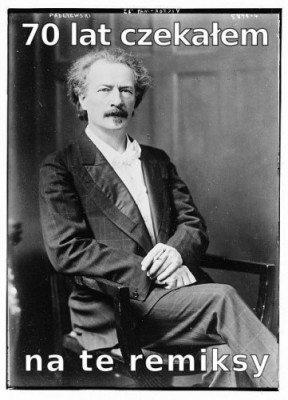 “I have waited 70 years for these remixes.”On 1 January of each year, the works of authors who died 70 years earlier pass into the public domain. There’s something strangely arbitrary in assuming that exactly 70 years after an author’s death is the best moment for the expiration of copyrights – regardless of the author’s will, and the importance or popularity of his or her works. But that’s how the law works in this particular case – automatically.

For a few years now, 1 January has been internationally celebrated as Public Domain Day. In Poland, the first celebration took place on 2007 on the initiative of Jarosław Lipszyc and Piotr Waglowski – and since then, events associated with the Public Domain Day have been organised by the Open Education Coalition. Celebrating the anniversary of a dozen of authors’ deaths might seem strange. But it is not their death that is celebrated, but rather the fact that their amazing works have – by passing into the public domain – become genuine public goods, our common legacy.

Given the general, intuitive understanding of copyrights, the idea of a public domain might be considered strange – and celebrating its expansion as comparable with negating copyright itself. Aren’t we celebrating the fact that an author just lost control over the use of his work, including the ability to benefit from it financially? The public domain, however, has been a full-fledged element of the copyrights system almost from its inception in the 18th century. Public Domain Day is important, because it reminds us that the copyrights system is a balanced arrangement, covering both individual control over one’s work and the mechanisms of fair use. Moreover, the authors whose works are passing into the public domain have been dead for 70 years, which renders them unable to extract financial benefits from anything – so why keep their works under legal lock and key?

It’s also an opportunity to think whether 70 years is the appropriate amount of time. How would our culture look like with the works of Andrzej Wajda, Dorota Masłowska, or DJ Kwazar in the public domain? Many people think that without copyrights the artists would starve, and creativity would die out. While acknowledging the validity of the copyrights system, it’s worth remembering that entire sectors of culture are governed in a different manner, just take a look at folk culture or disco polo. Public Domain Day helps us understand that “all rights reserved” is just one of many equal models of culture management; that, in the words of Paul Torremans, copyright is just “little coral reef of private right jutting up from the ocean of the public domain.”

The term “public domain” is increasingly often used in debates. Recently, Bogdan Zdrojewski, the Polish Minister of Culture and National Heritage, declared that we should start building a “genuine public domain” – a virtual cultural space that is open to everyone. We witnessed a very rare occurrence – a niche concept has become a basic category of cultural policy in the space of just a few years. It indicates that there was a significant shift in the way people think about the public mission in general. Until recently, the best way to protect and share our national heritage was by locking it up in cultural institutions, the designated caretakers. Nowadays, these institutions make their resources and collections public to fulfill their mission. And that means releasing these resources, and – more often than not – sharing them via internet.

The “public domain” term itself, however, sometimes becomes unclear – a phrase like “sharing in the public domain” is commonly used to describe multiple forms of sharing content. The most important part of “public domain” isn’t the word “public”, but the “public good” element (even if it’s not visible at first glance). But that public character, the freedom of fair use, are strictly defined by law. When talking about the public domain, we need to protect the preciseness of the term, and the integrity of the domain itself. Because the strength of our heritage depends on it. Directives on how to do just that can be found in the Public Domain Manifesto, published via the EU COMMUNIA program. The Manifesto is being adopted as an example by an increasing number of cultural organisations and institutions. One of the most important of these organisations is Europeana, “Europe’s digital library”,  a place where one can access the collections of libraries, archives, and museums. Their Public Domain Charter, patterned after the Manifesto, states that Europeana “believes in and wishes to strengthen the concept of the Public Domain in the digitised world” (both documents are available in Polish in the recently published Openness in Public Cultural Institutions).

Multiple Polish organisations have issued similar declarations. Librarians from the National Library and the Kuyavian-Pomeranian Digital Library from Toruń have always taken part in the Public Domain Day. Libraries, like no other public institution, have the notion of public domain inscribed in their institutional origin. Another such institution is the Zachęta National Gallery of Art, whose Open Zachęta project is supposed to orient the gallery towards the notion of culture as common good.

The word “Rzeczpospolita”, derived from the Latin phrase “res publica”, meaning public affairs, was not only historically used to describe the Republic of Poland, but also denoted all that was considered a “public good”. Our culture, stitched together from pieces that become available 70 years after the deaths of their authors, is one such public affair. But we don’t have to wait until our bones turn to dust and the memory of us fades from the minds of the living – our works have to be liberated while we’re still alive, via voluntary legal mechanism that serve open culture. Making the public domain as extensive as possible is in our common interest – our entire output and creativity is built upon the past: on the works of others, created years ago, which we only found.