Adam Mazur: What does Ermutigt, the title of the Warsaw exhibition in Zachęta, actually mean to you?

Wolfgang Tillmans: It just came from a response to how nice I thought this name of the museum “Zachęta” was and what actually the word means [ encouragement,  incentive, stimulus – ed.]. It stands for a kind of mindset, an innocence, that is perhaps lost today. You really wouldn’t simply call something “encouragement” today.

I thought about possible political encouragement of Polish audience.

It would be fine for me, but that is something I can’t say openly. I can suggest it, I can hint with the word at that, but I can’t say “I want you to do this or do that.” That is not right for me because that then becomes political art in terms of illustration. It is always a problem with political art that it can only do so much in either field: you can either do something in politics or in art. They can somehow overlap. They can speak to each other, but what constitutes art for me is the fact that it is useless. That it has no purpose except for itself. It does not owe anybody anything. It’s pure existence is enough. And if you tie it too much to a cause then something gets lost, so I try to speak as clearly as possible, without actually pointing too much. 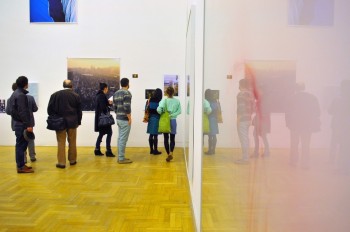 Your point is to strike a balance between politics and aesthetics?

I have some works with a clearly outspoken message, but in general I do not want to have too much of political rhetorics. Yet politics are not just in the obviously political.

Your art, especially in the 1990s is perceived as very intimate and biographical, while after 2000 you have started to make more abstract images that constitute a whole new period, already closed one, in your art.

No, it is not closed yet. Abstract pictures were also a response, an outcome of an interest in finding out more and more about how can I make pictures. I had known their potential since 1992, but I started to use their potential from 1998 onwards and after 2000 I made full use of it. So it was a strategic decision and I think it was a political decision – if we are talking about politics seriously – to stop taking images of reality and I was stemming myself against a tide of ever more pictures and picture consumption and image terror.

At the same time it was you who were perceived by critics as one of top producers of immense number of images, elevating snapshot aesthetics and making it art.

Yes, what is liberating or what is right at one point, must be questioned at another, because parameters change. Then things become necessary to readjust. 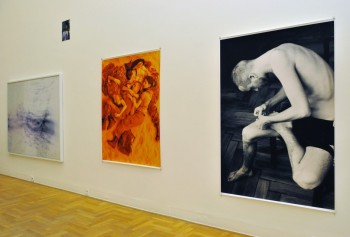 There is quite many interviews with you allowing a reader to get deeply into your biography and nature of your photographs, but I could not find any direct references between you and other masters of contemporary photography. I would like to ask you how do you perceive photographers as biographical as for instance Nan Goldin?

I like her work, but she was never an influence. There is an idea of authenticity that she upholds, and that I never even tried to do.

To my great surprise in one of recent issues of Camera Austria dealing with a category of “documentary” you have published a statement of quite strong belief in photography. Tillmans, it says, “never questions the veracity of the medium, but uses it to find truth in art itself”. What does it mean?

There are people involved in what you communicate with your pictures. You are making a fiction that is real, because it happened in front of you. But it is happening also with a camera in the room. Because of being younger and being in a more media savy time, I could not trust a direct, unfractured authenticity idea. For me there was not just one identity that I could photograph. When you look at my first book from Taschen, which was a sort of crystallisation of that time for me, there are all sorts of levels of stagenes and unstageness. A broken, fractured identity interested me.

It is easy to say it now that it is all about fiction and that we do not believe in reality anymore. Your first books were not perceived as fiction, but as a strong statement on reality. Now, we can see those images in a different light and think they are beautiful. Yet, we have to remember that twenty years ago they were approached as trash, crude, even oridinary snapshots.

I always felt that in order to make something believable it should come across as little artificial. You can always admire Jeff Wall, but it does not convince you that what is in the picture really happened. I like Jeff Wall a great deal, but it is totally not what I wanted to do. 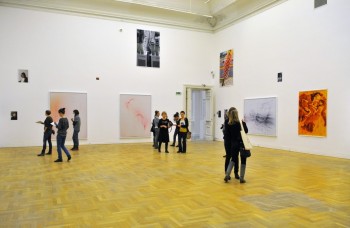 What about German photographers from for example Dusseldorf School? Do you feel inspired by Andreas Gursky or Thomas Struth?

I feel a connection with someone like Albert Renger Patzsch or August Sander, the Naue Sachlichkeit in general, that was driven by a fascination of looking at the world without wantning to shoehorn it into a concept. The Dusseldorf School I find is too concerned with looking for something of their own, their segment of the world. It’s no longer just looking. I understand the desire to order things, but that should come from a hunger for looking at the world and not from a desire to order.

Your influence on ways of displaying contemporary photography is immense, so the very last question concerns your definition of a curator. How do you work with and treat curators? Do you need them? How it is to curate shows at Between Bridges gallery?

Curators are important partners in the process of setting up a show. Only I can ro the typo of installations I do, but without dialogue there would be something missing. I allow for outside influences to reach me. I might even seem undecisive during installation. I ask a number of people, including the art handlers, for their opinion. Out of this I filter my own opinion, that often is in stark contrast to the advise just been given.

At Beetween Bridges I enjoy, and at the same time I am burdened with the responsibility of dealing with other people’s work. Curating is always a tiny act of writing in a big book of history. I either embrace this task or I don’t.