“We want to introduce the term design into the everyday vocabulary of the average denizen of Kielce,” Marek Cecuła, world-renowned ceramic artist and artistic director of the Kielce Design Centre told the crowd during the Centre’s opening ceremony. Born in Kielce, this citizen of the world learned his trade in Israel and the US, later taught there, and finally decided to help out with the revitalisation of his hometown by establishing an institution involved in educational activities and organisation of various exhibitions. He wants it to be something more than just a local cultural centre. In addition to educating, promoting new talents, and popularising the local ceramics industry, the KDC will also seek new materials and technologies and work out possible applications for both. Indirectly, the centre is also supposed to raise the awareness of aesthetics among the local population and improve the competitiveness of the regional economy and industry, at least that’s what the outcome the centre’s founders are hoping for.

Just like in the case of the Cieszyn Castle and the Regional Museum in Stalowa Wola, the influence of this new design centre is supposed to reach beyond the borders of the region – and Cecuła’s connections in the international art world are surely going to give it a head start in that department. The opening ceremony gathered preeminent Polish designers, design evangelists, and guests from abroad, including Ake Rudolf, German curator and author of the famous “Urban Guerilla Protest”. Another guest, Giulio Cappellini, an Italian furniture designer and talent hunter, passionately elaborated on falling in love with objects and creating lasting relationships with designers, whom, he claims, he can find even in the most remote corners of the globe. It seems that Cecuła possesses a similar charisma, the team he assembled is young and dynamic, made up in part of talented ceramic artists – the works of KDC coordinator Edyta Cieloch have been purchased by the New York Museum of Arts and Design.

The programme of the facility reflects the scope of interests and possibilities of its founders, plus assorted EU directives about “fostering creativity and innovation” and “regional development”. The semi-industrial ceramic workshops established next to the Centre are to be made available to craftsmen and students arriving for residencies. They will serve as venues for workshops and presentations for the general public. 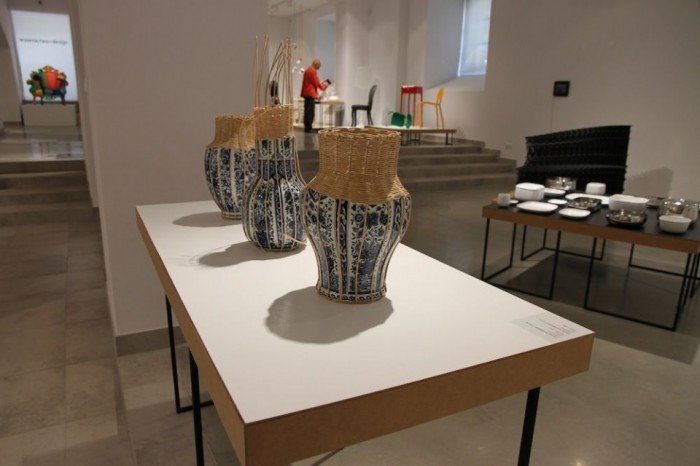 The two floors of the Centre combine two inaugural exhibitions. One is organised by the KDC curator, Dagmara Kopała, and is called Design = Wzornictwo. The other one is a review of the works of students and graduates of the Staatliche Hochschule für Gestaltung in Karlsruhe, with a pretentiously long-winded name: From Regular to Bold: a Journey Through the Swallows of Young Design Evolution. Kopała’s choices include everyday objects, mostly household ones, that are unique/rare/ part of a short series/experimental/decorative/ in nature. The exhibition features primarily ceramics, but also glass, furniture, jewellery, and other examples of the creative application of cutting-edge materials and technologies – innovative textiles, plant-made leather shoes, delicate vases, dresses and necklaces created in 3D printers out of nylon or metal.

Many of the aforementioned objects were not previously part of any Polish exhibition. Some of them have already attained “iconic” status (like the Blow Away Delft Vase created by the Swedes from Front Studio, Marcel Wander’s Knotted Chair, and Maarten Baas’ Clay Furniture), while others gained momentum at last year’s Salone del Mobile in Milan (including the works of Karlsruhe students and products created by world-renowned artists: Nendo, Konstantin Grcic and the Bouroullec brothers). The collected examples of “art design” are a representation of what design is from the perspective of those who create material culture – and the founders of KDC consider themselves part of that latter category, with the common denominator being their experimental approach to the matter and techniques of expression. 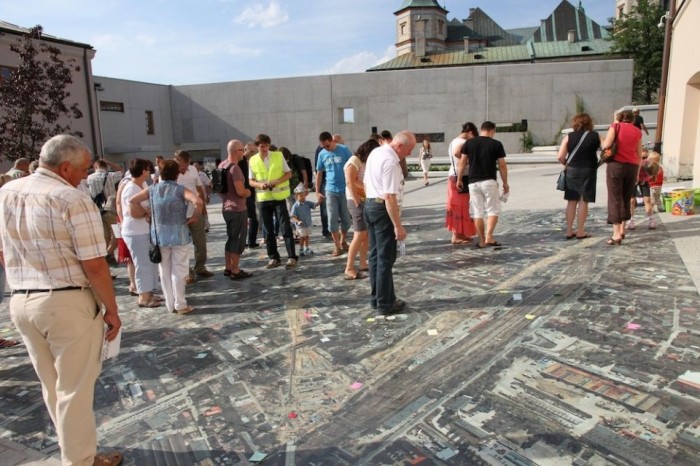 What conclusions is the local audience supposed to draw from these two exhibitions?

The square in front of the Centre’s entrance has been covered with a large print of a satellite image of the city. On the second day of the Centre’s inauguration, the denizens of Kielce could place colourful blocks on the print to denote areas which needed some form of repair. People who visited that day also had the opportunity to take part in a happening organised by Yuya Ushida, an engineer-mechanic (a title he bestowed upon himself), and construct a piece of seating furniture out of modular fiberglass elements.

Getting the locals with positive attitudes to visit this new facility might be tricky, as it is located on the grounds of a former prison which has operated in this exact spot since the times of the Russian czars and up until the 1970s. Dagmara Kopała told me that basically every citizen of Kielce has had someone from their family detained in this place. This kind of trauma doesn’t just go away on a whim – the task of handling its effects fell to the Centre for Patriotic and Civic Thought established near the KDC. 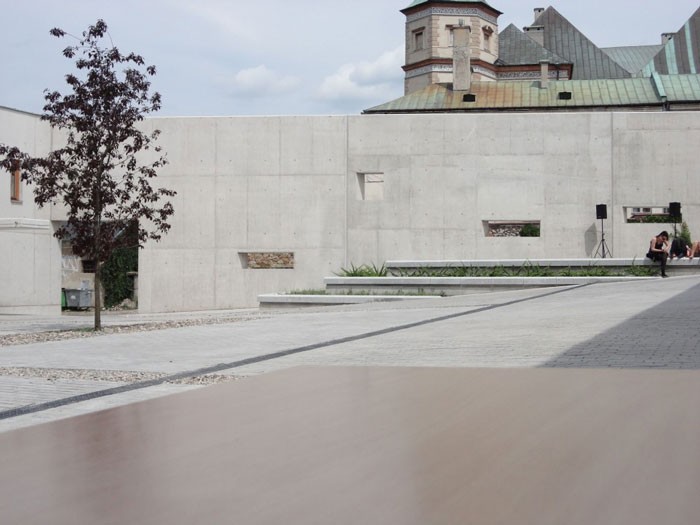 The space between DCK and Centre for Patriotic and Civic Thought, former prison courtyard

“It’s very important to include the local populace in the development of this place,” says Kopała. But these attempts at inclusion are going against the modern image of the Centre as a whole – the works of artists from Kielce and the Świętokrzyskie voivodship, presented at a separate gallery called Brama, selected by KDC curators, look more like a collection of handmade peculiarities rather than projects that are definitely worth launching and popularising. It’s easy to trivialise the existence of the KDC, saying that similar design centers are springing up all over the country as they are the pets du jour of the local administrations, while terms like “creativity” and “innovation” are just tired buzzwords that help in acquiring grants from the EU. For most contemporary art critics, design exhibitions are just bland collections of pretty objects, easy to consume for the average audience and easy to present in the media. While it’s all true, these collections are also a reflection of the material culture we’re dealing with today. 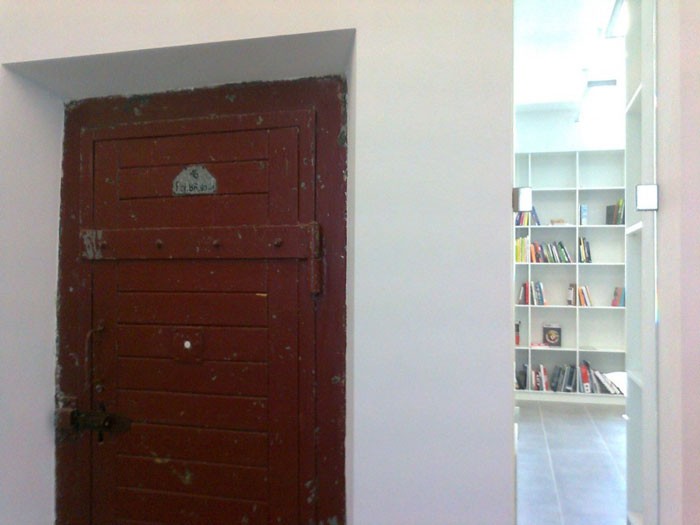 Traces of the prison

Design, understood as finding effective solutions to real problems, has to be inclusive, and not exclusive, focused on the creation of (representations of) things. Design does not have to be critical – it has to act critically, it should push us to reflect and reevaluate, it should teach us design thinking, which is an unorthodox approach to problem solving, and openness to change. As noted by Matylda Krzykowski (herself echoing Charles Esche), institutions such as the KDC should be a sort of power plant, generating new ideas and creative energy – it might not be a place you drop by every single day, but in time, its energy will reach further and further.

Coetzee’s libretto doesn’t span the entirety of the book; together with composer Nicolas Lens, the author shifts his focus to three characters, whom director Maja Kleczewska describes as ‘suspended in lasting’ – Joanna Roszak on Coetzee and Lens’ ‘Slow Man’

Look around – nowadays even ads for shoes are often bolder than the so-called alternative. The desire for something new and vivid is neither alternative, strange nor unattainable. – Wojtek Ziemilski talks about his Lisbon expierience, going back to Poland and phantom phone vibrations

Half an hour before a premiere I paint my nails. Some elegant colour, no greens or dots. This particular activity requires me to be absolutely calm – interview with a stage manager at the National Opera in Warsaw

We will have to wait some time for tangible effects of DCK’s efforts, but the place itself merits a visit even today. It’s just a comfortable two-hour drive along E77 – exhibitions open till 4 August 2012

The explosive mixture of hurt ambitions, feelings of superiority and complexes changes the editing process into a farce worthy of Gombrowicz himself. You need to have nerves of steel – on the job of an editor